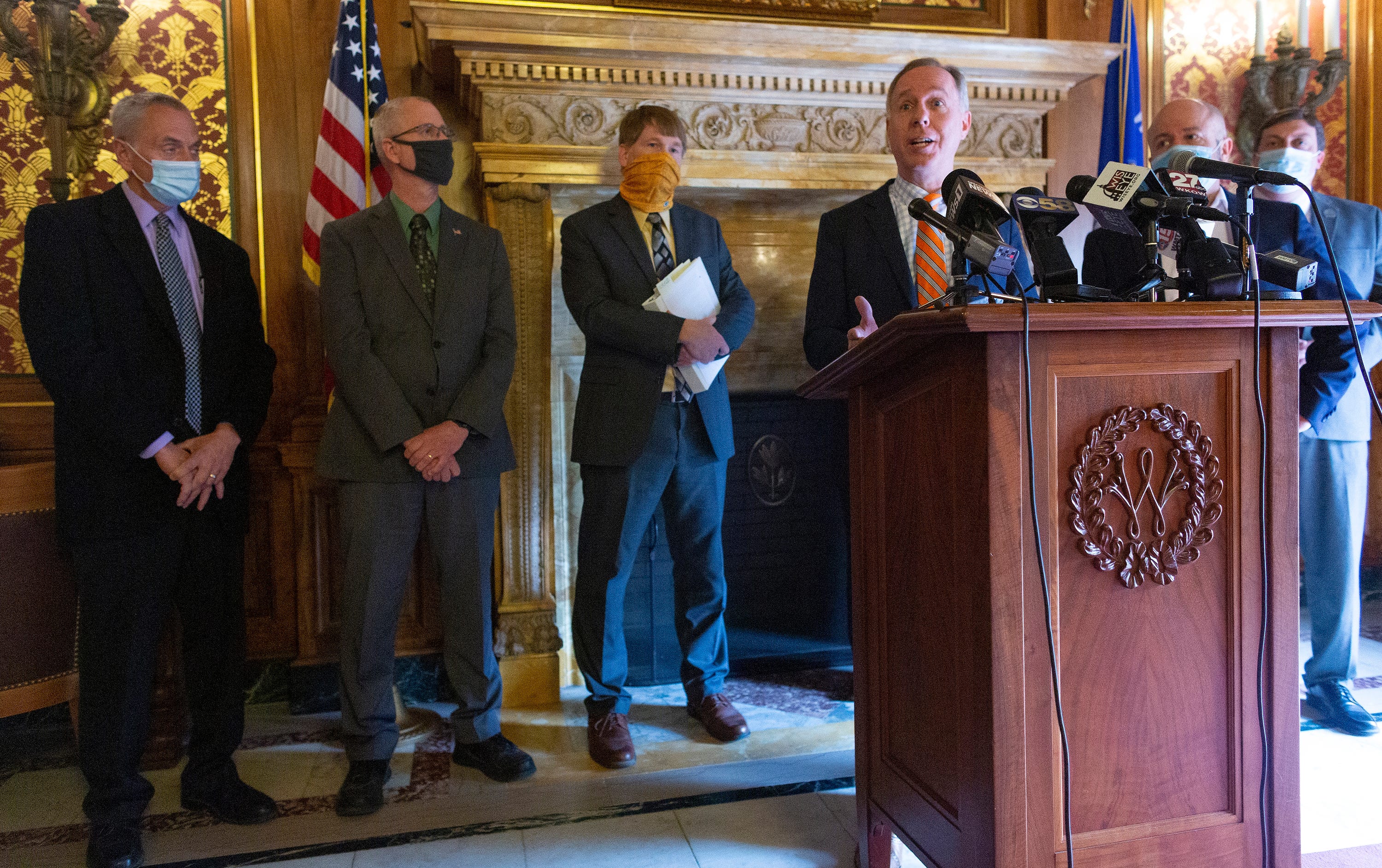 MADISON, Wisconsin – State lawmakers on Tuesday passed a series of Republican-authored bills that would require COVID-19 vaccines to be optional and sent to Democratic Gov. Tony Evers a bill that gives GOP lawmakers control over how federal relief funds are spent in Wisconsin.

Evers said he would veto legislation that gives Republican lawmakers authority over COVID-19 relief funds before the bill was introduced. But he hasn’t yet said whether he will sign legislation that bars employers and government officials from requiring vaccinations.

Assembly Bill 23 and Assembly Bill 25 bar government health officials and private employers, respectively, from requiring individuals to receive a vaccine against the coronavirus and its variants, which cause COVID-19.

Under current law, state health officials may require vaccinations during a public health emergency except in certain medical circumstances or if an individual objects for religious or conscience reasons.

Most of the groups that have lobbied on the bills oppose the idea of barring private employers from requiring vaccines, including the Wisconsin Medical Society, the chamber of commerce in Madison, and groups that represent nurses and other sectors of the medical community.

“This does not assist health care employers from assuring the safety of nurses and their patients,” a statement from the Wisconsin Nurses Association said. “We would like to see the use of the current statute that allows for medical reason, religious and personal conviction instead.”

But leaders of the Wisconsin Health Care Society and LeadingAge Wisconsin, which represents long-term care facilities, said in a letter to lawmakers that providers of long-term care “should be granted the discretion to determine whether vaccination against COVID-19 should be a condition of employment, depending on careful and thoughtful consideration — weighing factors such as the health and safety of residents and staff, current staffing levels, and community spread of COVID-19.”

Assembly Minority Leader Gordon Hintz, D-Oshkosh, said passing bills that downplay the importance of COVID-19 vaccines at a time when health officials are trying to get as many people as possible vaccinated to end the pandemic sends a questionable message.

“The intent behind them seems to be pandering toward the same kind of anti-science, anti-public health position that’s out there at the worst time possible,” Hintz said before the floor session.

Republican Rep. Jeremy Thiesfeldt of Fond du Lac, who authored the bills, said Tuesday that vaccines are “a blessing” but, “it has not gone through the entire process that normally is done by the FDA and people ought to be able to say no to the vaccine that has not had emergency approval.”

“I absolutely plan on getting a vaccine as soon as my turn is up,” Steineke said. “I want to make sure that everybody’s that more vulnerable than me has that opportunity to do so first.

Assembly Bill 24 would bar health officials from requiring places of worship to close buildings during disease outbreaks such as the coronavirus pandemic.

Under Evers’ stay-at-home order issued last spring, churches and other places of worship were required to close to the public and instead offer virtual services to prevent the spread of COVID-19.

One of the most infamous outbreaks during the pandemic was among a church choir in Washington. Supporters of the bill say the closures infringed on the free exercise clause of the First Amendment.

“Concern for religious freedom and congregations’ longing to gather for worship must be weighed against the deadly seriousness of our situation, the need to respect science, and the temptation to abuse our freedom to the detriment of others,” a statement from the Wisconsin Council of Churches said.

Assembly Bill 89 requires the governor to submit to the Legislature within 21 days a plan for when all state employees will return to work in their agency offices. It is opposed by two unions representing state employees.

Both houses also passed a bill that would give control of federal stimulus funds to the Republican-controlled finance committee and Assembly Republicans were poised to pass the bill over Democrats’ objections Tuesday evening.

“Unfortunately it seems like the Democrats want to have a piggy bank where they can choose to give the money with no oversight, no transparency, no ability to judge whether or not it’s the best decision until the money is already out the door,” Vos said before the Assembly’s vote.

Britt Cudaback, spokeswoman for Evers, said earlier this month that the Legislature’s track record of passing one bill in response to the pandemic disqualifies it from being trusted to distribute relief funding properly.

“Wisconsinites can’t afford to wait around for the Legislature, and that’s why the governor will continue working to save lives, put shots in arms, and get resources and relief out as fast as he can, just as he has since the beginning of this pandemic,” she said on March 5.

Vos threatened to sue over the funding if the bill was vetoed.