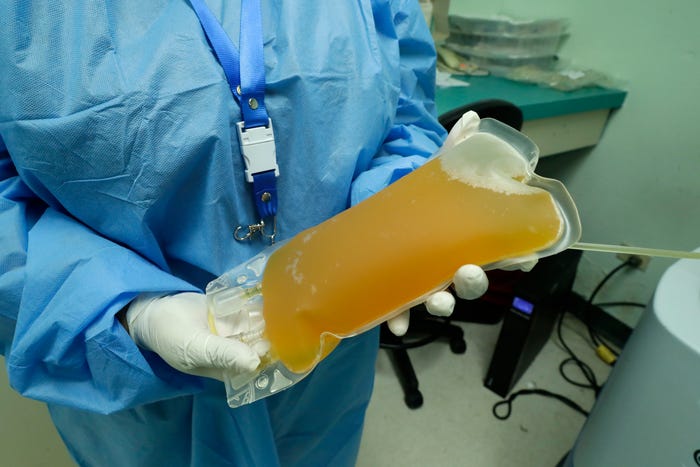 As the government works double-time alongside companies to test and manufacture an effective vaccine for the coronavirus, researchers in the meantime examine other drugs and treatments for COVID-19, the illness caused by SARS-CoV-2.

Many scientific articles and government officials have been focused on drugs like hydroxychloroquine and remdesivir, but little attention has been directed toward a less glamorous form of treatment: convalescent plasma therapy.

Although it's an old tool introduced to science in the 19th century, it's still considered experimental during the coronavirus pandemic as the U.S. Food and Drug Administration says there’s currently no approved treatment for COVID-19.

Public figures such as congressmen and celebrities have donated plasma after recovering from COVID-19 and urge others to do the same. But before you do, here's everything you need to know about convalescent plasma therapy.

What is convalescent plasma and how does it work?

According to the FDA, convalescent plasma is the liquid part of blood collected from patients who have recovered from COVID-19. These patients develop antibodies, proteins that might help fight the infection.

Plasma from survivors give patients an immediate injection of virus-fighting antibodies so they don't have to wait for their own immune systems to kick in. The use of plasma from survivors to treat those sick with the same illness goes back more than a century and has been used to stem outbreaks of polio, measles, mumps and influenza.

Convalescent plasma therapy felt out of fashion in the mid-20th century as antimicrobials gained more popularity in the field, according to a scientific article published in The Lancet. The therapy, however, reemerged periodically during new epidemics such as SARS in 2002-2004, influenza A H1N1 in 2009 and MERS in 2012.

A 2004 study done in Hong Kongshowed patients with SARS who were given convalescent plasma earlier in the infection process were discharged from the hospital sooner and were less likely to die than patients who were given it later. The World Health Organization published official guidance on convalescent plasma donor selection and treatment after research also showed positive results for Ebola.

While studies suggest convalescent plasma therapy is effective in combating other coronaviruses, there has been little evidence to suggest it can do the same for SARS-CoV-2.

The FDA issued guidance for health care providers that recommend using convalescent plasma therapy for clinical trials and patients with serious or immediately life-threatening disease who aren’t eligible to participate in trials.

However, some experts argue the disease is already too advanced in critically ill patients for the treatment to work.

More evidence:Use of survivor plasma is considered safe, but two new tests will see if it combats COVID-19

"Once they get to the ICU stage, it seems like they’re too far gone because there's all these physiological things going on with them that antibodies won't touch at that point," said Dr. Camille van Buskirk, medical director for the Mayo Clinic Blood Donor Program.

A study from China published in JAMA Wednesday, found convalescent plasma in addition to standard treatment didn’t significantly improve patients with severe or life-threatening COVID-19. Researchers, however, concede results may be limited as they were unable to recruit more patients and terminated the study early.

Van Buskirk says other studies show early signs of improvement among patients who are hospitalized but not yet severely ill, those in the "middle ground."

While efficacy may still be up in the air, safety isn't. In a Johns Hopkins University study, more than 16,000 Americans with COVID-19 were infused with plasma from recovered patients and no major safety issues were reported.

Dr. Shmuel Shoham, associate professor at Johns Hopkins Medicine, is involved into two randomized, controlled studies at the university looking at convalescent plasma as a prevention method and treatment for COVID-19 in an outpatient setting. Although there isn't any preliminary results from those two studies, previous studies give him a “glimmer of hope.”

“The trend tends to go the same way again and again,” Shoham said. “The people who get it seem to have a positive response and, when comparisons are made, they tend to do better than the people who didn’t get it.”

The future of convalescent plasma therapy for COVID-19

An obvious obstacle for convalescent plasma therapy is supply.

Unlike manufactured antimicrobial medicines, convalescent plasma is a natural treatment that must be harvested from recovered COVID-19 patients who meet the criteria and are willing to donate.

Van Buskirk says declining infection rates in some parts of the country has allowed the Mayo Clinic to build up inventory, but it's also made it more difficult to find donors.

"We’re hoping if everyone can get out there and collect as much as they can that we’ll have enough for the next wave that comes along," she said, which many experts predict will be in the fall.

Plasma can be frozen and stored for up to 18 months.

In order to maximize donations, most centers use standard apheresis technology that separates the plasma from the blood in real time and then pumps that blood back into the donor. Van Buskirk says the process takes longer than traditionally donating blood and separating the plasma afterwards, but it can double the amount of plasma collected.

In late May, the Department of Defense announced a nationwide initiative to collect more than 8,000 units of plasma at 15 Armed Services Blood Program centers across the country using the technology.

In an attempt to promote plasma transfusions, more than 40 of the nation's top health institutions have joined the National COVID-19 Convalescent Plasma Project. People who want to donate plasma can register with the Mayo Clinic, the lead institution for the program.

More donation programs can be found on the FDA website. Van Buskirk recommends checking in with your local center before donating as requirements have changed over the course of the pandemic.

'Someone’s life could depend on it':Two congressmen donate plasma after COVID-19 recovery

Have you recovered from coronavirus?:Want to help doctors find a treatment? Here's what they need from you.

Even with a healthy supply, the concept of convalescent therapy may be difficult for patients to grasp, Shoham says.

"It does require a paradigm shift in people's minds," he said. "It's a product that needs to be given by IV infusion as opposed to getting a pill or a shot in the arm."

One treatment can take up to an hour which makes it harder to line up front line workers who may be more at risk for exposure as the country's economy begins to open up.

However, Shoham thinks people are more receptive to the idea of immunotherapy and hopes the acceptance will continue past the current pandemic.

"It could change things, not just for the coronavirus, but a host of different viruses that don't have traditional therapies and change from season to season," he said.