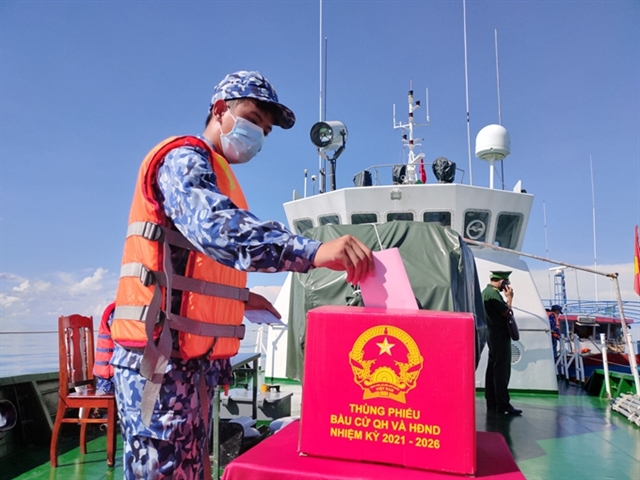 As many as 69.2 million voters nationwide go to 84,767 polling stations across the country to elect their representatives for the 15th National Assembly and People’s Councils at all levels for the 2021-2026 term on Sunday. Voters of all walks of life, including State President Nguyễn Xuân Phúc, share their expectations about the elected deputies on the Election Day.

I call on 69 million voters nationwide to promote solidarity and patriotism by exercising their rights to elect deserving representatives for the 15th National Assembly and People’s Councils at all levels.

The central Government will soon issue a resolution on specific solutions to build “a socialist state ruled by law and of the people, by the people and for the people” to ensure that all rights and powers of the central government and localities at all levels serve the people.

State agencies will also issue specific plans on streamlining administration reform and building legal institutions for “a socialist state ruled by law and of the people, by the people and for the people.”

Today is Election Day, a very important event of the country which takes place every five years. I got up at 4:30am because I am so excited to go to the polling station.

I have participated in many elections. As far as I can remember I was impressed about the ones in 1976 when the country united after the war. I was delighted at that time.

My only expectation is that the elected candidates always care for the people and be close to them. The only way they can do that is to listen to the people so they can understand them better.

Phạm Công Chính, 73, from Hà Nam, who is under centralised quarantine at K Hospital

The K Hospital has organised the elections of deputies while under lockdown for COVID-19 prevention and control purposes. Other patients and I have been under quarantine at the K Hospital for 17 days. Today I am happy to be able to vote at a polling station set up within the hospital.

I am fully aware of my rights and obligations of citizens to vote amid the fourth wave of the COVID-19 pandemic. We strictly comply with regulations on pandemic prevention and control when voting under the guidance of the Ministry of Health and other authorities.

Each voter is required to disinfect their hands, wear a mask, and use a separate pen to vote.

The hospital has set up mobile ballot boxes at each separate department of the hospital, which collects ballots at different time slots to limit the contact of many people at the same time. As far as I know, critically ill patients who are unable to walk will be able to vote at their bed.

The Vĩnh Ngươn Border Guard Station station has 29 teams and checkpoints for COVID-19 prevention and control near the border with Cambodia. There are 244 voters from three forces (border guards, police and the military).

We have set up four polling stations with three mobile ballot boxes that will be transported to checkpoints at the border with Cambodia so that the pandemic prevention teams can exercise their right to vote while on duty at border areas.

An Giang Province has 200 teams and checkpoints for COVID-19 prevention and control near the Cambodian border.

This year’s elections are a very special one as the country is struggling to fight against the COVID-19 pandemic. I have noticed that a number of families have been suffering from the pandemic. Many of them have lost their jobs or had their incomes cut significantly. Many people have suffered from health problems, both mentally and physically. The whole economy has been affected.

Therefore, we have high expectations from the elected representatives as they will represent us at the National Assembly.

I am most concerned about candidates’ empathy and knowledge about the economy and their long-term vision. Only candidates with these qualities will be able to represent us, I believe. — VNS