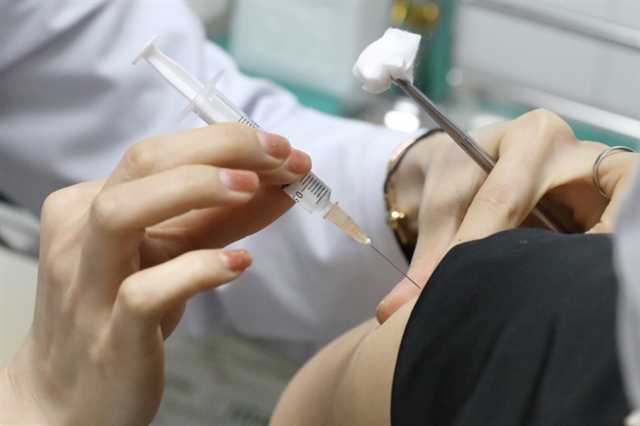 A volunteer gets the second shot of Nano Covax COVID-19 vaccine on Thursday. — VNA/VNS Photo

HÀ NỘI — The Military Medical University under the Ministry of National Defence on Thursday began giving the second shots of the Nano Covax COVID-19 vaccine in the second trial phase to 26 volunteers who received the first jabs between February 26 and March 10.

According to Associate Prof. Dr. Chử Văn Mến, Director of the Military Medical University’s Centre for Clinical Trials and Bioequivalence, after receiving the first shots, volunteers exhibited symptoms such as pain at the injection point, a light fever, muscle aches, joint pain, and fatigue, but did not require medical intervention.

The health of the 560 volunteers remains stable, he said, adding that Nano Covax is safe and the volunteers are ready for their second shots.

The second trial is being organised simultaneously at the Military Medical University and the Pasteur Institute in HCM City, with volunteers including those with mild background ailments such as hypertension, diabetes, and cardiovascular issues.

The Military Medical University will submit the preliminary test results to the Ministry of Health and the National Council for Ethics in Biomedical Research in May for review and evaluation, before conducting the third phase of trials.

Previously, at a meeting of standing members of the National Steering Committee for COVID-19 Prevention and Control, a representative from the Ministry of Health said that the third phase of trials will take place from May to September, with the vaccine then registered for circulation in September, three months earlier than scheduled.

Việt Nam expects to have its locally-produced vaccine available by the end of the third quarter. — VNS