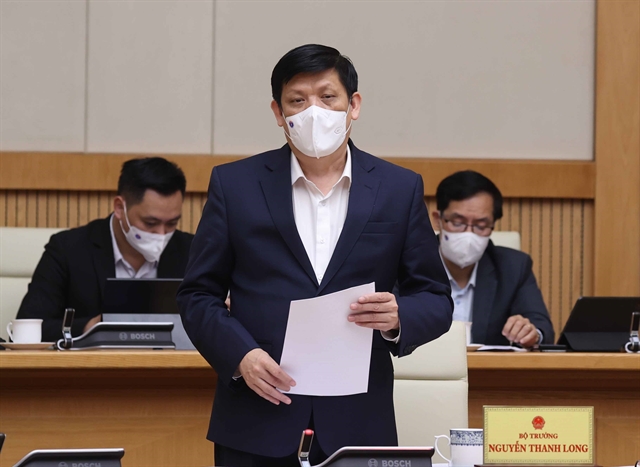 In a report on COVID-19 vaccine supply to the central Government on Wednesday in Hà Nội, the health chief said Việt Nam currently has four vaccine options.

First, as an eligible recipient country under the WHO-led COVID-19 Vaccines Global Access (COVAX), Việt Nam is set to receive some 30 million doses and the health ministry is “expending negotiation efforts to ensure that 30 million doses can arrive within this year.” The doses from this initiative comprises mostly Oxford/AstraZeneca vaccines that can be kept at normal fridge temperature (2-8 degrees Celsius).

The first 117,600 doses in this order were delivered to Việt Nam on Wednesday, and are expected to be administered to frontline medical workers starting in early March.

Third, the health ministry is in talks with Pfizer, and Long said “there’s a chance” that the American pharmaceutical firm could supply some 30 million doses to Việt Nam in 2022. The health ministry is seeking the Government’s approval for eliciting social resources to buy the vaccines. The Pfizer vaccine, however, unlike the Oxford/AstraZeneca, needs to be stored at ultra-cold freezer temperature between -80 and -60 degrees Celsius.

Earlier, also in a Government meeting, a health official said Việt Nam was in talks with Russia to obtain licence rights to produce Sputnik V in Việt Nam.

“We expect that Việt Nam will not suffer from vaccine shortage in 2021. The health ministry is also doing its best to implement the rollout plan. This is the biggest vaccination drive in the country’s history with over 100 million doses to administer,” Long said.

The health ministry is preparing all scenarios and mobilising all units in and outside the health sector to engage in the vaccination efforts, to speed up the process and ensure coverage, Long continued.

The progress of Việt Nam’s own developed and produced vaccines are also on point and manufacturing could begin in early 2020.

Also at the meeting, health minister Long announced the results of genomic sequencing of current coronavirus clusters in the community.

The three cases related to the dead Japanese man earlier this month in Hà Nội are infected with 20C variant of SARS-CoV-2, which is predominant in South Korea, Sri Lanka, India and Taiwan but is not present in Japan itself. This is the first time the variant has been reported in Việt Nam. The variant is not more transmissible and it is not known whether it caused more severe disease in the patient.

The variant making the rounds in Hải Dương Province, the current epicentre of the country’s third infection wave, along with some cases in Quảng Ninh Province, is mostly the one first reported in the UK, which is highly contagious but not necessarily resulting in more acute disease.

However, there is one sample taken in Hải Dương that is suspected to be the much more concerning South Africa variant which is reported to lower the effectiveness of many existing approved vaccines, including Oxford/AstraZeneca.

Long said the health authorities are still conducting mass testing and genomic sequencing to see why this variant is occurring in Hải Dương. — VNS