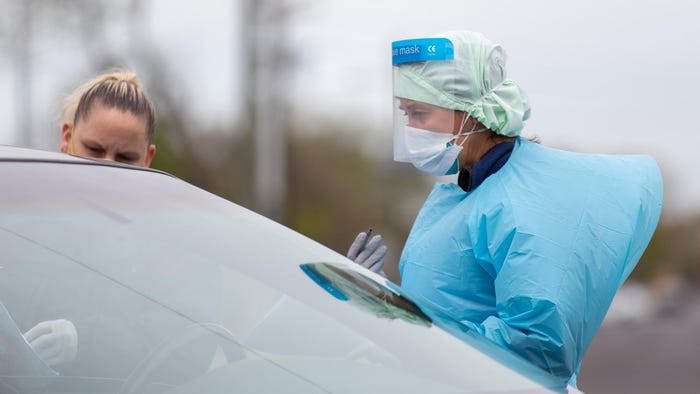 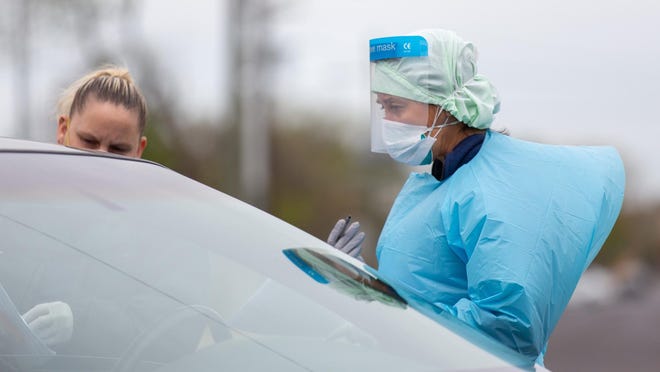 WILLINGBORO — There were no miles long lines or encampments along Sunset Road with carloads of people looking to be tested.

Instead, the Monday afternoon kickoff of testing at Virtua Willingboro hospital, formerly Lourdes Medical Center of Burlington County, went off without massive crowds or drama.

More than 50 people were tested within the first hour and Virtua officials expect to test about 100 people each day.

“Today was a busy day at the testing site, which verifies that there is a real need in this community,” said Dr. Samuel Weiner, a medical director for the Virtua Medical Group who was at the test site Monday.

“Operationally, everything went smoothly. We are glad we can help provide this important service,” he added.

About a dozen vehicles were lined up and waiting shortly before the noon opening of the test site set up in the parking lot of the hospital campus off Sunset Road. A few people without cars also stood waiting outside the testing area, apparent walk-ups.

Plastic tents served as the testing zones and the site was cordoned off with yellow tape. Masked security officers directed vehicles and were overheard asking people in vehicles if they had an appointment. Others were asked for identification.

The first vehicle seen going through a drive-thru tent was there for less than five minutes before driving away and off the site. And while vehicles continued to line Hospital Drive through the campus, the traffic did not back up onto either Sunset or Salem roads, the two main roadways to and from the hospital.

The free testing site is the second to open in Burlington County but is restricted to patients referred to the site by Virtua Health physicians and residents of Willingboro, the county town hardest-hit by the virus.

As of Sunday, the town of 30,000 residents had 270 confirmed coronavirus cases, easily the most of any of Burlington County’s 40 municipalities. Ten Willingboro residents have also died from the disease, also a high in the county.

Weiner said the number of people tested on Monday appeared to be close to evenly split between those with appointments and walk-ups. Results are expected within three to five days.

“In the interim, we encourage everyone to proceed as though the results are COVID positive in order to be safe and reduce any opportunity for potential exposures,” he said.

Burlington County’s first testing site opened on March 26 at the county Emergency Services campus off Woodlane Road in Westampton. Testing there is open to any county resident with symptoms but is by appointment only.

A total of 1,432 residents have been tested in Westampton, a modest sum for a county with more than 400,000 residents. However, officials have been able to ramp up testing capacity there in recent weeks so that they can now test about 250 people each testing session, typically Tuesdays and Thursdays.

The Virtua testing site is expected to be open weekdays from noon to 4 p.m.

Weiner said the testing would continue as needed and based on the availability of test kits.

“We are committed to doing all that we can to guide the region through this public health crisis,“ he said. ”We ask the community do their part by isolating at home as much as possible, avoiding crowds or gatherings, and washing their hands frequently.”

The site is Virtua’s third ambulatory COVID-19 testing site beyond its testing at its five hospitals and seven emergency rooms in South Jersey. The health system is also running testing sites in Camden County, one in Camden and another in Voorhees that is reserved for health care workers and first responders.

Congressman Andy Kim, D-3 of Moorestown, has pushed for additional testing in both Burlington and Ocean County.

He has said an additional testing site run by the Federal Emergency Management Agency in South Jersey was preferred since the two FEMA operates now are in Bergen and Monmouth counties, but that he would continue to seek additional federal help for additional testing by counties and hospitals.

“I’m glad to see Virtua step up and take action to increase testing in Willingboro. Our state and county leaders have been working hard to increase testing in Burlington and Ocean Counties, but they can’t do it all on their own,” Kim said Monday. “The only way to get to the level of testing we need to reopen our schools and businesses is for the federal government to step in and help out. Every day they wait, is another day our communities have to suffer through this crisis without a clear path forward.”