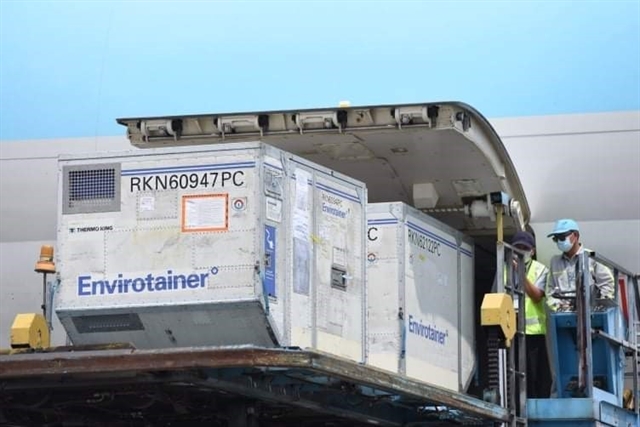 HÀ NỘI — Việt Nam’s COVID-19 vaccination will begin right after the health ministry receives an accreditation certificate from the Republic of Korea (RoK) for the COVID-19 vaccine batch that arrived on February 24, which is due later this week or early next week.

Deputy Minister of Health Trương Quốc Cường made the announcement at the Government’s regular press conference in Hà Nội on Tuesday, in response to questions over vaccination progress after the first 117,600 doses of Oxford/AstraZeneca, manufactured in RoK, bought commercially via Việt Nam Vaccine Company (VNVC), had arrived in Việt Nam.

The Ministry of Health has assigned the National Institute for Control of Vaccine and Biologicals to verify the batch, which has been basically completed. It is now waiting for an accreditation certificate from the RoK before health authorities can begin inoculations.

According to the official, the vaccination effort is in line with the Government’s Resolution No. 21/NQ-CP on the purchase and use of COVID-19 vaccines, which details nine priority groups for free inoculations – including frontline workers (medical staff, public security and military officers, workers directly involved in the pandemic efforts; customers officers, diplomats sent overseas on official missions; teachers and front-facing public administrative offices; essential service workers; elders above 65 years old, people in outbreak regions; the poor; among others).

Besides these groups, pandemic-hit localities will also be prioritised and the northern province of Hải Dương, the epicentre of the current community outbreaks that have logged nearly 700 COVID-19 cases to date, will be one of the first provinces and cities to get access to the vaccine.

According to the Resolution, individuals and organisations are also encouraged to voluntarily pay for vaccine shots.

When more vaccines are readily available, the Government is ready to expand inoculation for all having demand to achieve community immunisation.

As scheduled, another batch of Oxford/AstraZeneca vaccine along with vaccines from COVAX Facility will be delivered in late April. The ministry has prepared infrastructure and resources for storage and vaccination, Cường said. — VNS