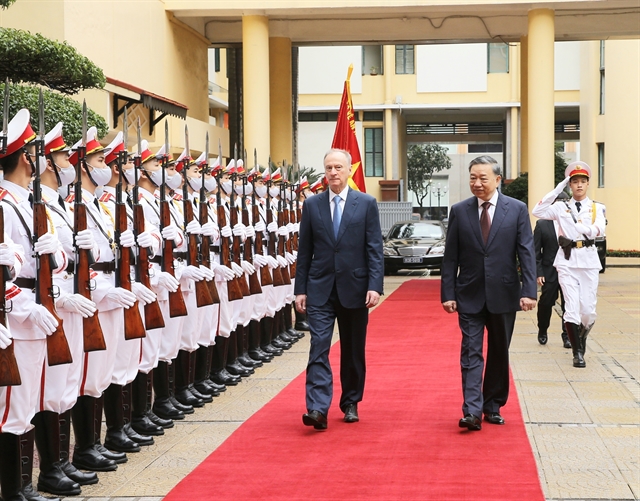 HÀ NỘI — Việt Nam appreciates Russia’s success in the fight against COVID-19 and hopes to bolster cooperation in ensuring human security against the backdrop of the pandemic.

He was speaking during a reception for a high-ranking delegation from Russia led by Secretary of the Security Council General Nikolai Patrushev, who is visiting Việt Nam from March 15-17.

The visit is of great significance as a continuation of activities marking the 70th founding anniversary of Việt Nam-Russia diplomatic ties (1950-2020), especially after the success of the 13th Congress of the Communist Party of Việt Nam.

During the talks, the two sides voiced their delight at the comprehensive strategic partnership thriving in an effective and pragmatic manner, expressing a belief that bilateral relations, as well as cooperation in security and national defence, will be further strengthened in the time ahead.

Lâm spoke highly of the visit amid the complex developments of COVID-19, saying it demonstrates Russia’s sentiment and trust towards Việt Nam as well as efforts by the Russian Security Council General to promote the friendship.

The visit will deepen traditional relations between the Ministry of Public Security (MoPS) and Russian law enforcement agencies and the two countries’ comprehensive strategic partnership, he added.

The minister also voiced his belief that under the leadership of President Vladimir Putin, Russia would continue to enjoy stable development and affirm its prestige and position in the international arena, greatly contributing to tackling conflict and maintaining peace, stability, and development in regions around the world, including the Asia-Pacific and Southeast Asia.

The Ministry of Public Security (MoPS) and Russian agencies have launched various cooperation activities in all spheres and obtained fruitful results, he added, calling on both sides to effectively carry out their signed agreements.

Lâm and Patrushev exchanged views on global and regional issues and those of mutual concern in a bid to coordinate in ensuring cybersecurity, the safety of Vietnamese and Russian citizens overseas, and Việt Nam’s security industry development, among other matters.

At the end of the talks, the officials witnessed the signing of a memorandum of understanding on cooperation between the MoPS and the Investigative Committee of Russia.