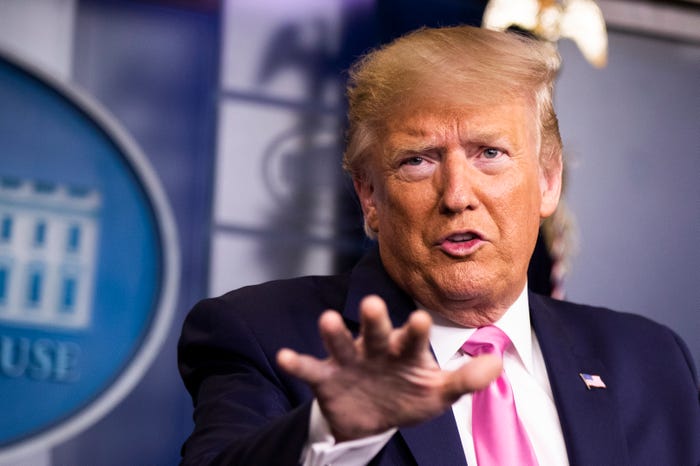 WASHINGTON – President Donald Trump named dozens of the nation's largest companies to an advisory group Tuesday he said will help him study options for restarting the U.S. economy as conservative groups lobby for a quick reopening.

Trump initially said he would name a "task force" to examine whether to extend federal social distancing guidelines currently set to expire May 1. Instead, he named more than 100 industry leaders to what the White House described as "economic revival industry groups" and left unclear exactly what their role will be in the process.

"They're going to give us some ideas," the president said Tuesday, adding that he would be meeting with the leaders of the companies by telephone.

The list included Sysco Corporation and Tyson Foods among nearly a dozen agriculture companies. It included some of the nation's largest banks, such as Bank of America, Goldman Sachs and Morgan Stanley. Massive defense contractors such as Lockheed Martin and Northrop Grumman made the list. Fast food companies in the effort will include McDonald's, Wendy’s and Starbucks.

Apple, Google, Walmart, Target and other household brands were included.

Trump halts WHO funding:Trump announces 'halt' in US funding to World Health Organization amid coronavirus pandemic

Conservative and business groups like Club For Growth and Tea Party Patriots have lobbied the administration to at least begin to reopen the economy as soon as possible. The argument has also become popular on conservative talk radio.

Stephen Moore, an economist whom Trump once nominated to the Federal Reserve, said the economy must be reopened "in a safe way" by May 1, or the the result will be "calamitous."

"We could see unemployment rates of 20 to 30 percent for the rest of the year and millions of small businesses from shore to shore in body bags," Moore said.

Trump has acknowledged an eagerness to ease social distancing guidelines that has at times run counter to the advice of public health officials. That has been especially true as the virus causes turmoil in the markets and millions of Americans lose their jobs.

Trump and Cuomo:Trump and Andrew Cuomo clash over who has power to reopen America's economy

He initially said the second task force would include "very great doctors" as well as business people and potentially members of Congress and state governors. The White House included several health care companies on the list, but it was not clear how many of those executives had backgrounds in public health.

The list included Scott Gottlieb, the former commissioner of the Food and Drug Administration.

The president created a coronavirus task force led by Vice President Mike Pence in late January. That group includes some of the nation's best-known public health experts such as Anthony Fauci, director of the National Institute of Allergy and Infectious Diseases, and Deborah Birx, who is the White House coronavirus response coordinator.

Some groups said the reopening needs to be accompanied by a reduction of regulations for businesses.

“It’s clear that we need a plan to reopen the economy quickly that balances health and financial concerns, but just as important, we need to suspend or remove many of the costly regulations to reignite the economy when we get back to work," said David McIntosh, president of the Club for Growth.

Alfredo Ortiz, president of Job Creators Network, argued without providing evidence that "bureaucrats" would prefer to keep the economy closed down "for a year."

Ortiz, who has spoken with Treasury Secretary Steve Mnuchin about the hardships facing small businesses, said people will know how to act when the economy revives.

"We know a lot more about the virus than we did a few weeks ago," he said. "The American people have learned what it takes to stay safe and it's showing up in the number of cases."