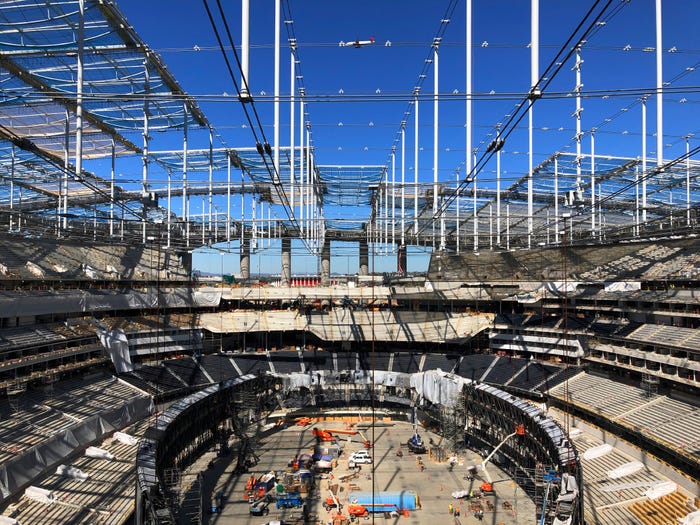 LOS ANGELES — A trade worker at SoFi Stadium, being built for the Los Angeles Rams and Los Angeles Chargers, has tested positive for COVID-19, a spokesman for the construction firm overseeing work at the site in Inglewood, California, told USA TODAY Sports on Sunday.

The worker was assigned to an isolated area outside the building and had not at any time entered the building or used any of its common areas, said Chris McFadden, vice president of communications for Turner Construction Company.

“First and most importantly, the worker is doing well, receiving care and is recovering," McFadden said by email. “The safety of the people on site and in our community remains our top priority."

CORONAVIRUS & SPORTS: Get the latest news and information right in your inbox. Sign up here.

All equipment that may have been used by the worker is being disinfected and workers who were in contact with the individual have been identified and contacted, according to McFadden.

McFadden did not immediately respond to a question about whether construction will resume Monday. The 70,000-seat stadium, being built at a cost of more than $2 billion, is scheduled to open July 25, which would allow the Rams and Chargers to move into their new home for the 2020 NFL season.

Last week, the construction company in charge of the Raiders' new stadium in Las Vegas said a worker on the site had tested positive for COVID-19. The construction work has continued during the coronavirus pandemic.

One worker at the site told USA TODAY Sports that he was informed Saturday about the worker testing positive for COVID-19 and construction continued.

The worker, who said he has been assigned a job outside the stadium, asked not to be identified because he said he feared he would be fired for speaking to the media.

“I think if you want to slow the virus down, just stop this job," he said. “That would be the right thing to do."

McFadden said workers who may have been exposed are “minimal" because of protocols and the nature of the worker’s assignment that took place in a material pre-assembly area outside the building.

McFadden said those who were in “close contact" are in self-quarantine, while those in “casual contact" are self-monitoring, “in accordance with our protocols, LA County Department of Health directives, and CDC guidelines."

Another construction worker who requested anonymity told USA TODAY Sports he was not maintaining six feet of separation from co-workers despite protocols that call for such social distancing.

“These guys are like my brothers," he said when asked why he was not adhering to the protocol. “I see them more than my wife."

“This includes limiting access to the personnel hoist, no gatherings over 10 people, and those must maintain six-foot separation, and certain tasks that require close contact are suspended or re-sequenced," he said.