POINT PLEASANT BEACH, N.J. – Another “major” storm threatened to bring more snow and ice across the Northeast and Mid-Atlantic on Thursday as winter storm warnings extended as far south as weather-weary Texas.

More than half a million customers in Texas were still without power early Thursday after frigid temperatures kicked large shares of the state’s power plants off its grid this week. Across the U.S, more than 1.1 million people were out of power Thursday, with Louisiana, Alabama and Oregon also experiencing widespread outages. Earlier in the week, more than 4 million in Texas alone didn’t have electricity.

As many as 30 people have died this week, including from fire or carbon monoxide poisoning while struggling to find warmth inside their homes.

While temperatures were rising some in the middle of the country, “abnormally cold temperatures will hang around through the end of the work week,” the National Weather Service said.

The heaviest snow will fall in parts of Virginia, West Virginia, Maryland and Pennsylvania, with isolated patches getting up to a foot of accumulation, the Weather Service said.

“Significant and disruptive” ice was expected further south, which could bring up to half an inch of accumulation in North Carolina and southern Virginia, forecasters said. “The result will be dangerous travel conditions, numerous power outages, and extensive tree damage.” 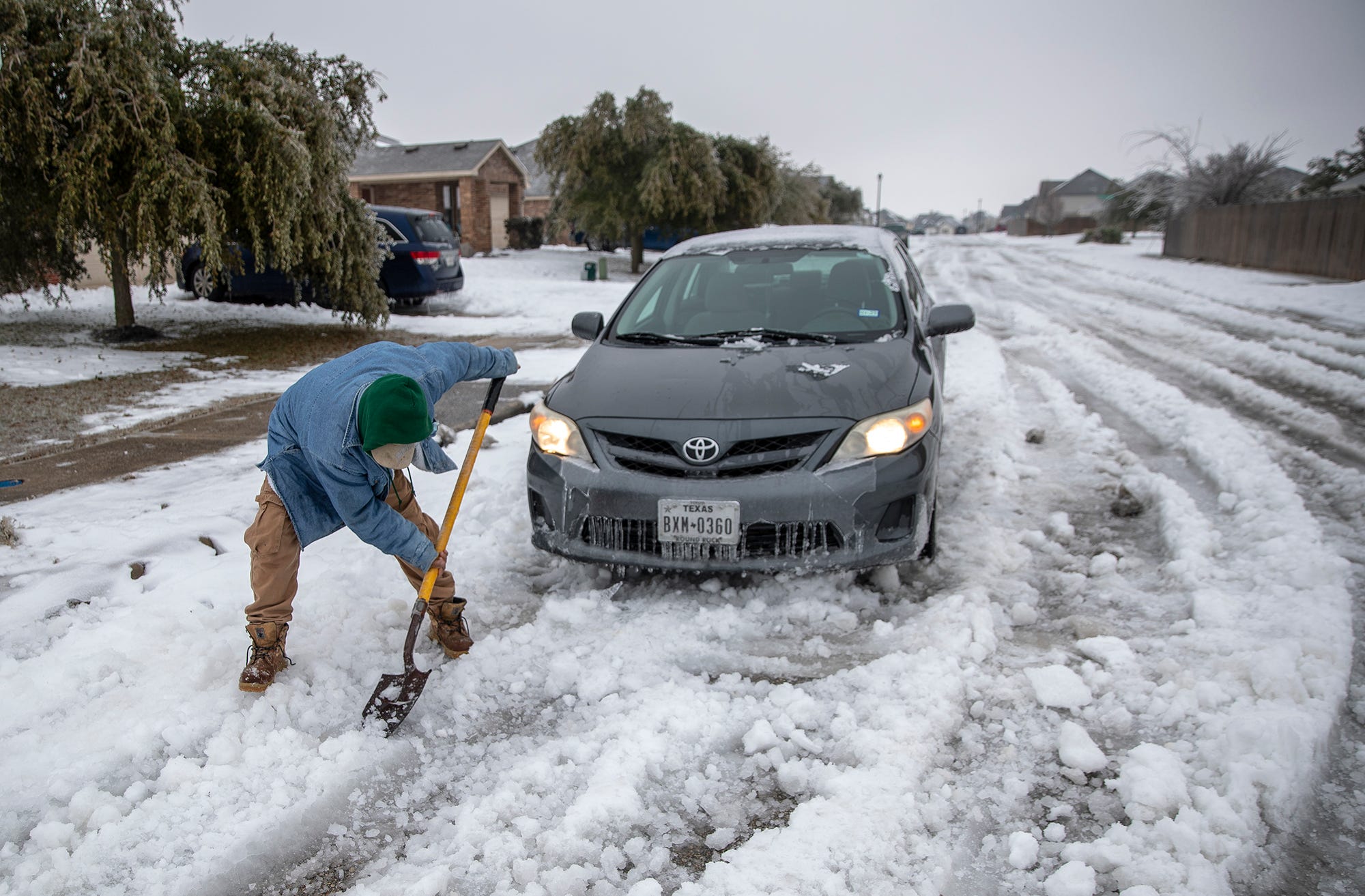 In New York City, forecasters were anticipating snow to bring up to 8 inches by Friday and a “light glaze of ice” over the New York and New Jersey region. Flurries of snow were already blanketing the Jersey Shore on Thursday morning.

Farther north, the storm is expected to drop half a foot of snow from the Hudson Valley to the southern parts of New England, the Weather Service said.

“This storm and its predecessor a couple of days earlier, accompanied by once-in-a-generation outbreak of frigid air, has left behind an absolute mess in the South Central states and is on the move,” said AccuWeather Chief On-Air Meteorologist Bernie Rayno.

Meanwhile, freezing temperatures lingered on Thursday in parts of Texas, where more than 568,000 were without power to heat their homes Thursday morning.

“My elderly family members have had to live off candles and hot stoves for the last couple days,” said Bertha Rendon, who has been living with her aunt and uncle in East Austin this week. “That’s when it really hit me. I mean, I’m young — I’m 41 years old — and I can take this, but they can’t. So many people in my area are going through the same thing.”

The cold weather also damaged infrastructure and pipes, forcing officials to warn 7 million people, a quarter of the state’s population, to boil drinking water before use.

In Austin, some hospitals were facing low water pressure and no heat. Texas Gov. Greg Abbott urged Texans to turn off their water, if possible, to prevent damage to the water system and pipes.

Toby Baker, executive director of the Texas Commission on Environmental Quality, said people have been letting their faucets drip to prevent frozen pipes, and frozen lines have led to low water pressure across the state.

‘Massive failure’:Why are millions of people in Texas still without power?

Grid manager Electric Reliability Council of Texas said late Wednesday that it had restored approximately 8,000 megawatts, or about 1.6 million households, since the morning.

“We are working around the clock to restore power to Texans,” said ERCOT President and CEO Bill Magness. “We made progress today, but it will not be good enough until every person has their power back.”

ERCOT said it hoped to have enough power restored by Thursday that local utilities could rotate outages rather than keeping power off for extended periods of time. But managers declined to say exactly when electricity would be fully restored, saying that the main factor in coming days will be the cold weather.

The power outages have prompted Abbott to call for reform earlier this week to ERCOT. Meanwhile, the Federal Energy Regulatory Commission, which oversees interstate electricity transmission, and the North American Electric Reliability Corporation, which oversees reliability across the U.S., Mexico and Canada, announced earlier this week they would be launching an inquiry into the the bulk-power system.

Areas near the U.S.-Mexico border were bracing for around 3 to 6 inches of snow Thursday. An inch to less than an inch was expected in San Antonio and Austin, forecasters said.

‘An electrical island’:Texas has dodged federal regulation for years by having its own power grid

In Dallas, the Weather Service said, “the worst of the weather is behind us.” But roads will remain dangerous as they partially melt and refreeze. “This means more black ice and bumpy ruts through Saturday.”

However, some warmer weather was in sight. Temperatures were forecast to be in the 50s in Dallas, Houston and Austin this weekend, with San Antonio expecting a 62-degree high on Sunday.

Power outages in the Portland, Oregon, area were the worst in 40 years, said Maria Pope, CEO of Portland General Electric. More than 350,000 customers at the peak of the storm lost power, and more than 100,000 in Oregon are still in the dark.

“These are the most dangerous conditions we’ve ever seen in the history of PGE,” said Dale Goodman, director of utility operations.

Icicles hanging from a ceiling fan, a frosted cactus: Texas is frozen in surreal photos