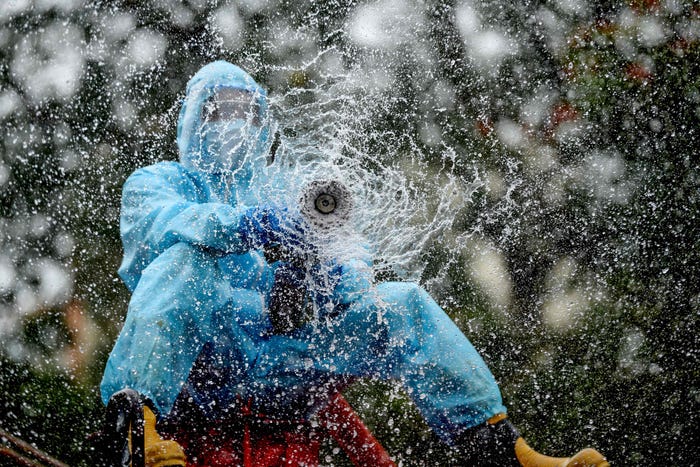 It's Ashley with the headlines everyone’s talking about today.

But first, a gentle reminder that it's an election year: U.S. voter registration dropped dramatically amid the coronavirus pandemic. Not registered? You can do it online now!

Coronavirus has hit 2 million confirmed cases in the USA. Let that sink in for a moment. Of those cases, more than 113,000 Americans have died since the virus emerged here a few months ago. More than 27,000 new cases were counted Wednesday, a day that saw almost 1,000 U.S. deaths. As the nation slowly reopens after months of lockdown, the pandemic that paralyzed the global economy is still very much among us. Despite a decline in U.S. deaths for six weeks in a row, health officials warn of a potential second round of infections. Dr. Ashish Jha, director of the Harvard Global Health Institute, says the USA must be prepared for 100,000 victims in the next few months.

Why are states seeing a sudden increase in coronavirus cases? Experts have more than one answer.

Confederate statues torn down and beheaded

A statue of Confederate President Jefferson Davis was toppled in Richmond, Virginia, on Wednesday. A brass cast of Charles Linn, a captain in the Confederate Navy, was ripped from its base in Birmingham, Alabama. Four statues at a Confederate memorial in Portsmouth, Virginia, had their heads removed. The issue of whether Confederate memorials should still stand has been reignited amid demonstrations across the country against racial inequality and police brutality. In some cases, protesters have taken it upon themselves to remove the statues after years-long battles to get them taken down. To those who want to see the memorials gone, the statues are symbols of racism that honor not only the slaveholding men they depict but also a system of racial inequality. Defenders of the memorials say they symbolize American values and Confederate history.

A Twitter user had a lot to say to a NASCAR driver who is quitting over the Confederate flag ban.Gov. Andrew Cuomo pledged support for a Christopher Columbus statue in Manhattan.

What everyone’s talking about

Name change alert: Lady Antebellum now goes by Lady A.Kelly Clarkson is divorcing her husband, Brandon Blackstock.Celebrities are at it again: Aaron Paul, Kristen Bell and more celebs join together for racism PSA; fans criticize cringey video.Innovation! Garth Brooks plans to headline a one-night drive-in concert event. Walmart's big move: It will no longer keep "multicultural" personal care products – marketed to African Americans – locked up in glass cases in stores, a practice that has long made the retailer the target of criticism.

Family members of two Idaho children missing since September – Joshua "JJ" Vallow and Tylee Ryan – say two sets of human remains found on their stepfather's property were the children. A prosecutor in the case confirmed Wednesday that the human remains found at Chad Daybell's house were the remains of children, but authorities have yet to confirm their identities, pending autopsies. "Both children are no longer with us," JJ's biological grandfather, Larry Woodcock, told the Post Register in Idaho Falls. Daybell appeared in court Wednesday after his arrest on charges of concealing, altering or destroying evidence. Court documents allege Daybell concealed or aided in concealing the human remains that were found on his property. The children's mother, Lori Vallow, remains in custody on child abandonment charges.

Gen. Mark Milley says it was a 'mistake' to accompany Trump on walk to church

Joint Chiefs Chairman Mark Milley said it was a “mistake” to walk with President Trump to St. John’s Church after peaceful protesters were forcibly cleared from the area. "My presence in that moment and in that environment created a perception of the military involved in domestic politics," the Army general said Thursday. Protesters outside the White House were forced away June 1, so Trump and other officials, including Milley, could walk to St. John’s Church for a photo op. Milley’s remarks mark a breach between the Pentagon and the White House on the military’s role in responding to the protests that followed the death of George Floyd, who was killed in May when a white Minneapolis police officer knelt on his neck for nearly nine minutes.

Stocks = ouch. Stocks are on track for their biggest drop since March over concerns about economic recovery and coronavirus spikes.Florida tells residents to humanely kill invasive, toxic toads that can be lethal to pets."Today" anchors Hoda Kotb and Savannah Guthrie reflected on their historic present. Small spoiler alert: Both are unsure of when they'll be reunited in person.Celebrities use their platforms to speak out against racism. Here's what they are saying."Live PD" was canceled after a report revealed that footage of a black man's death in 2019 was destroyed.

El Niño isn't likely to form this year, forecasters announced Thursday. This could mean more bad news in the Atlantic hurricane season, which is off to a fierce start (we have a record three named storms already!). El Niño, a natural warming of seawater in the tropical Pacific Ocean, tends to decrease hurricane activity in the Atlantic, Caribbean and Gulf of Mexico. "El Niño tends to increase upper-level westerly winds across the Caribbean into the tropical Atlantic, tearing apart hurricanes as they try to form," Colorado State University said.

A break from the news

🎂 This sweet man's reaction to a drive-by birthday surprise will warm your heart: "I had never cried that much."📝 5 incredibly useful things you didn’t know Apple Notes could do.🏡 Everything you need to turn your house into a smart home.

This is a compilation of stories from across the USA TODAY Network. Want this news roundup in your inbox every night? Sign up for The Short List newsletter here.