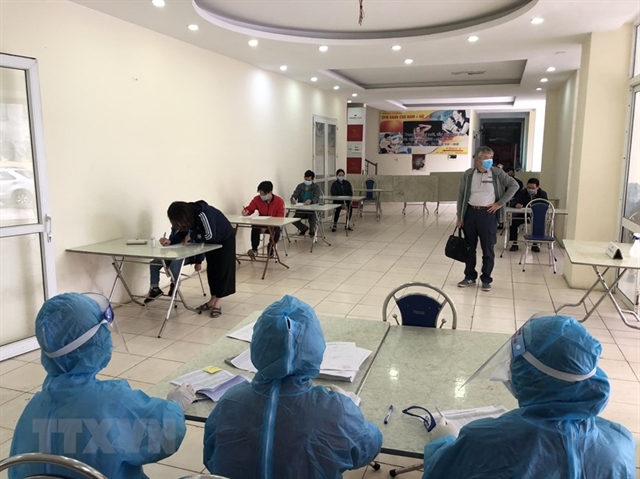 People who return to Hà Nội from localities with current COVID-19 outbreaks report their health conditions at Quan Hoa Ward’s Community House in Cầu Giấy District. From February 19, all such returnees would be tested for SARS-CoV-2. —VNA/VNS Photo Huy Hùng

Speaking at an online meeting with localities nationwide over COVID-19 prevention and control, Long said that localities must prepare resources to improve their testing capacity.

“If we are slow in testing, we will still chase but won’t stop the disease. Meanwhile, COVID-19 outbreaks at this time are spreading so quickly, we don’t have much time or we will lose,” Long said.

Current COVID-19 outbreaks, particularly ones in the north were developing with the presence of new variants of SARS-CoV-2 which could spread 70 per cent faster than the old one, Long said, adding that a high number of infections were reported within a short time.

The outbreaks happened in industrial zones, just before and during the Tết (Lunar New Year) celebration, which added difficulties to control the disease, Long said.

“The fight against COVID-19 in Việt Nam may not end in the first six months of this year. It could last the whole year,” Long said.

Localities were asked to not be neglectful as the disease could break out anywhere. Localities must prepare response plans, particularly in quarantine areas, among medical staff, medical materials and equipment.

“Those who have close contact with confirmed COVID-19 cases [known as F1] must be quarantined carefully to avoid the disease spreading into the community,” Long said.

However, it was necessary to pay attention to coordinating and receiving testing samples within 24 hours to respond to new strains of SARS-CoV-2, Sơn said.

“We must be fast in testing and tracing in the race with the new strains of the virus,” Sơn said.

Head of the Preventive Medicines Department Đặng Quang Tấn said that until now, outbreaks in Hà Nội, HCM City and Quảng Ninh province were under control.

However, the outbreaks in the northern province of Hải Dương were still complicated and would have more new cases to report in coming days, he said. — VNS