Those anxiously awaited stimulus payments and vaccinations should be accelerating this week as the U.S. gains ground on the relentless pandemic.

As vaccines become available, vaccine hesitancy is becoming a major concern. A recent new PBS NewsHour/NPR/Marist poll found 41% of Republicans saying they would not get one of the three federally approved coronavirus vaccines, compared to less than 15% of Democrats. Fauci appared on NBC’s “Meet the Press,” where host Chuck Todd suggested President Joe Biden should convince Trump to encourage Americans to get vaccinated.

“I hope he does because the numbers that you gave are so disturbing,” Fauci saidl “It makes absolutely no sense. And I’ve been saying that for so long. We’ve got to dissociate political persuasion from what’s common sense, no-brainer public health things.”

Those $1,400 stimulus payments should start hitting this week. It’s expected that March 17 would be the effective date when the Treasury actually transfers the money, according to industry experts. More than 100 million payments are expected to be payable on March 17 via direct deposit.

►After being canceled last year by the coronavirus pandemic, the NCAA men’s basketball tournament is back in 2021. It starts with Selection Sunday, when the field of 68 teams will be announced.

►Residents in more than a dozen California counties woke up Sunday morning to eased business restrictions. State officials loosened the requirements necessary to move out of the most restrictive tiers in California’s reopening system due to increased vaccinations in hard-hit communities up and down the state.

►The U.S. has surpassed 100 million COVID-19 vaccine shots and the World Health Organization reported 300 million global shots have been administered.

►Passengers packed planes during the Thanksgiving and year-end holiday rushes despite advice from the Centers for Disease Control and Prevention to avoid travel and are now doing so in greater numbers for spring break.

📈 Today’s numbers: The U.S. has over 29.4 million confirmed coronavirus cases and more than 530,000 deaths, according to Johns Hopkins University data. The global totals: Almost 120 million cases and 2.6 million deaths. More than 135 million vaccine doses have been distributed in the U.S. and 106 million have been administered, according to the CDC.

📘 What we’re reading: Spring and summer weather will provide opportunities for people — vaccinated or not — to enjoy low-risk, outdoor activities to better their physical and mental health, experts say.

USA TODAY is tracking COVID-19 news. Keep refreshing this page for the latest updates. Want more? Sign up for our Coronavirus Watch newsletter for updates to your inbox and join our Facebook group.

An official vigil for a London woman whose killing has a police officer facing murder charges and is spurring a national conversation about violence against women in the U.K. ended Saturday night with the city’s police department under scrutiny for the way officers handled some participants at the event held in defiance of coronavirus restrictions. Hundreds of people disregarded a judge’s ruling and police requests by gathering at Clapham Common in honor of Sarah Everard, 33, who last was seen alive near the south London park on March 3. Demonstrators said they wanted to draw attention to the fear and danger many women see as a daily part of British life; police said the size of the crowd created COVID-19 concerns.

Video of Saturday’s informal vigil turned rally showed officers from the same police force tussling with participants as they pushed their way through the crowd. London Mayor Sadiq Khan called police behavior “unacceptable” and said he had reached out to police for an explanation.

The Chicago River was dyed a bright shade of green Saturday after Mayor Lori Lightfoot reversed an earlier decision not to tint the waterway for second year because of the coronavirus pandemic. Crews on boats began dumping green dye into the riverfront about 7 a.m. after Lightfoot authorized the dyeing ahead of St. Patrick’s Day, delighting pedestrians with the vivid scene.

Last year, Lightfoot abruptly canceled the city’s 2020 parades and the river dyeing just days before they were to take place in the early days of the pandemic. She called off the parades again this year due to the lingering pandemic and said the river would once again not be dyed. But a Lightfoot spokesman said in a statement that the city opted “to honor the long-standing tradition” and authorized its partners, the Chicago Plumbers Union Local 130, to dye the river.

The third round of stimulus checks has started hitting bank accounts for eligible Americans after the IRS said Friday some would start getting payments as soon as this weekend. While some people have reported on social media they have been notified their stimulus payment is a pending deposit in their bank or credit union account, others have taken to Twitter wanting to know their status.

The IRS said Friday some people may see the direct deposit payments as “pending” or as provisional payments in their accounts before the official payment date of March 17.

Wells Fargo was trending on Twitter on Saturday after a tweet the banking giant sent out late Friday. “Customers who are eligible to receive direct deposit of their stimulus payment may expect it as soon as March 17, 2021,” Wells Fargo tweeted. Some bank customers complained on what they saw as a delay and asked why competitor banks and credit unions customers were getting their payments earlier. H&R Block also said March 17 is the day the IRS has told them most people will receive payments. 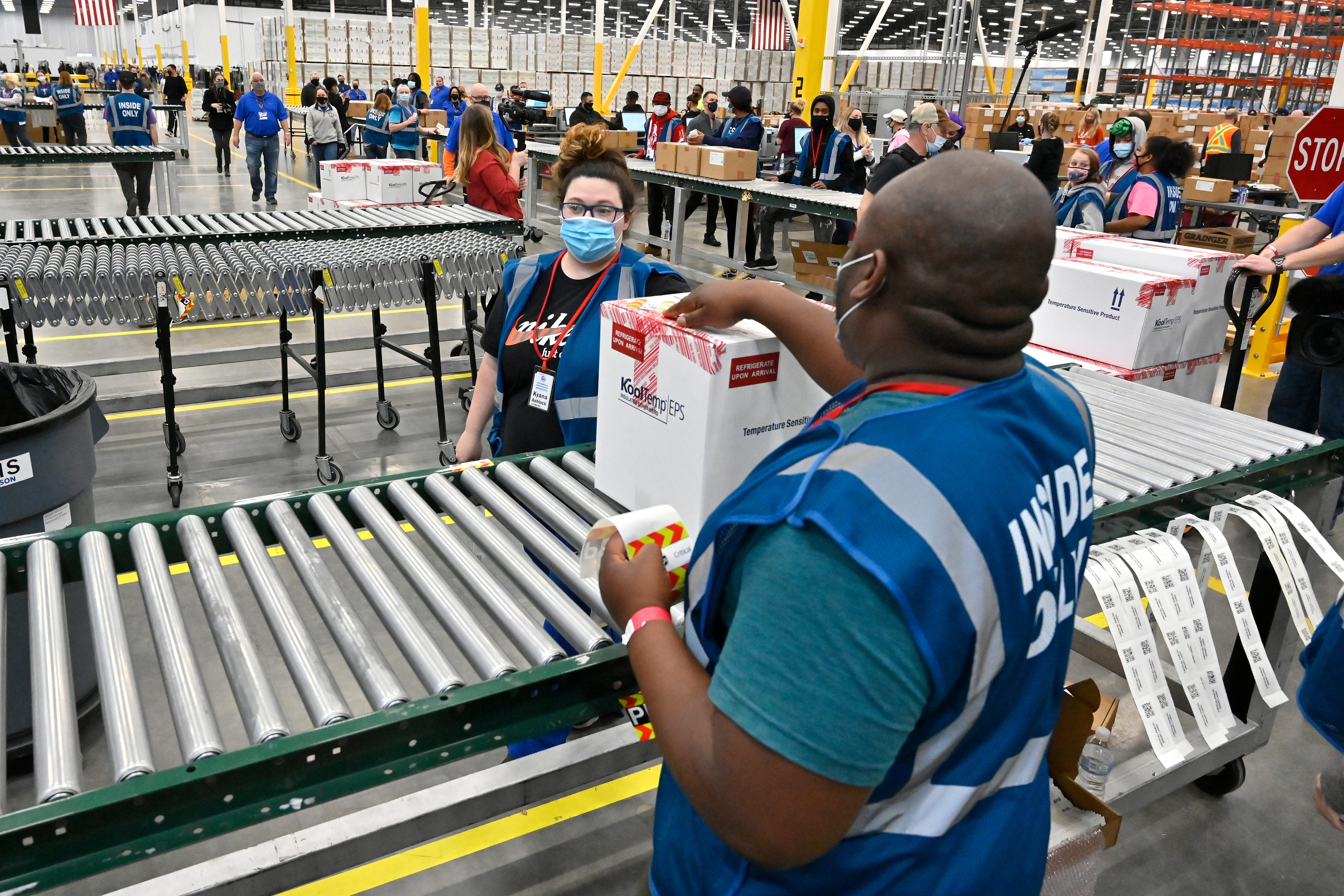