Prominent jockey Javier Castellano tested positive for COVID-19 on Thursday, according to an announcement posted to Twitter and then subsequently deleted by his agent, John Panagot.

Castellano, who has ranked among the top three on the North American earnings list for nine consecutive years, is the first known positive test among jockeys in the U.S. Though some racetracks have shut down amid the COVID-19 outbreak, several tracks across the country, including Castellano’s winter base at Gulfstream Park in Florida, have continued running races without fans in attendance.

Castellano had been named to mounts at Gulfstream beginning today and throughout the weekend prior to the announcement.

He flew to Arkansas to ride two stakes races on March 14 at Oaklawn Park, then was back at Gulfstream the following day to ride in two races. He hasn’t had a mount since then.

According to a person with knowledge of the situation, who spoke to USA TODAY Sports on the condition of anonymity because they were not authorized to speak publicly, Castellano wanted to ride this week at Gulfstream but was not allowed on the property per racetrack protocols unless he got a physical. 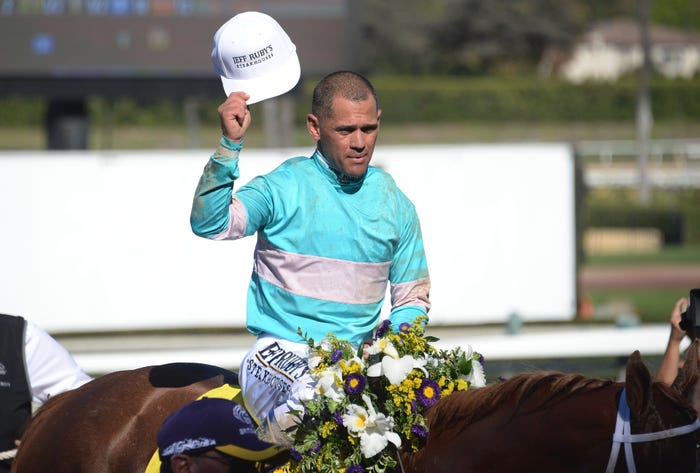 It’s unclear why Castellano did not ride last week, but the since-deleted statement from his agent said that Castellano was asymptomatic and jogged three miles on Wednesday before learning of the positive test.

Castellano, 42, has been one of the most successful big-race riders in the world over the last decade, winning four Eclipse Awards as Outstanding Jockey.