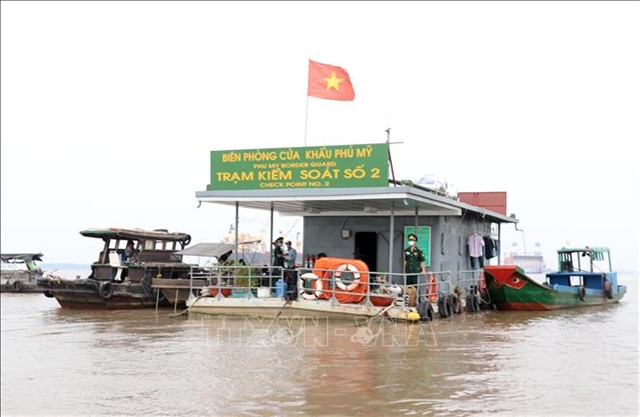 HCM CITY – While most people nationwide are busy preparing for Tết (Lunar New Year), the soldiers of the HCM City Border Guard are still working hard to ensure the safety of the city’s ports and prevent COVID-19 from spreading.

As one of the busiest seaports in the country, HCM City Port has always faced a high risk of SARS-CoV-2 spreading from cargo ships returning from abroad to the port despite the decrease of passenger ships since the outbreak of the COVID-19 pandemic.

“Faced with the complex developments of the COVID-19 pandemic and in the context of Tết coming, the border guards have deployed 24 quarantine points on rivers and onshore 24 hours a day, ensuring the tasks of patrolling, checking, controlling people and vehicles entering and exiting the port,” said Thắng.

“We must not only prevent illegal entry but also help stabilise import and export activities to successfully implement ‘dual goals’ of the pandemic prevention and control and economic recovery and development,” said Thắng.

“The border guards will ensure a safe new year holiday for people,” he said.

At checkpoint No.2 at Phú Mỹ border gate station, the soldiers have to work in difficult conditions.

The station is home to five officers and soldiers is a 60sq.m-floating house on the river with limited electricity and clean water.

Major Trương Văn Hà said: “Every day, officers and soldiers divide into two shifts on duty to check and control workers and vehicles in port.”

All workers entering and leaving ports are strictly controlled and given body temperature checks and asked to provide personal information to serve epidemiological traceability in case there are cases of infection.

All ships and boats entering and leaving ports must declare their travel schedules, especially foreign cargo ships, and agree to comply with regulations on pandemic prevention and control.

“In general, thanks to good information dissemination, people strictly abide by the regulations when entering and working in the port as well as measures to prevent and combat COVID-19 for ships and boats,” said the major.

The soldiers at the station have a clearly defined sense of responsibility and try to overcome difficulties when working on the river in unusual weather, limited visibility at night or poor living conditions.

“We encouraged each other to do our tasks well and are determined not to let the pandemic spread inland,” Hà said.

Lieutenant Colonel Nguyễn Thành Sơn, head of the station, said: “Due to the impact of the pandemic, the number of passenger ships has decreased but the risk of infection is still very high from the entry of cargo ships.”

“Therefore, we always put ourselves in a high alert position and proactively implement measures to prevent and control the pandemic for officers, soldiers and people working in the port to avoid the disease spreading into the city via the seaport,” said Sơn.

HCM City’s Border Guard is responsible for managing and protecting a coastline of 23.5km in an area of ​​more than 5,000sq.km with dozens of ports, wharves and buoys on two cargo channels.

The Border Guard is not only responsible for maintaining security and order in the marine border areas but is also charged with stopping COVID-19 from penetrating the city.

Last year, the city’s Border Guard discovered and handled 71 cases of law violation with 138 involved parties and processed entry and exit procedures for 16,654 ships with more than 116.2 million tonnes of cargo.

With Tết approaching, the number of ships and boats entering is increasing and the crew members want to reunite with their families so the situation has created more pressure on border officers and soldiers.

The Border Guard Command has directed the entire force not to neglect the complex developments of the pandemic and further invest in equipment for key points and forces working in rivers and seaports, tighten control of sea and river borders and not let illegal immigration and crew members come ashore without having their health checked.