WASHINGTON – Senators agreed Monday on shaping how former President Donald Trump’s impeachment trial will be conducted, with arguments consuming most of this week and a decision about whether to call witnesses days away.

Democrats have been wrestling with whether to push for a quick trial or include witnesses, which could lengthen the proceedings by weeks or months. Some Democrats want an exhaustive review of the Capitol riot Jan. 6. But others would prefer to move briskly past the trial, to confirm President Joe Biden’s nominees and work on spending legislation for COVID-19.

The trial is historic in several ways. Trump was the first president to be impeached twice and will be the first to be tried after leaving office. Senators who will be jurors were also witnesses to the insurrection as they evacuated the chamber, which was occupied by rioters.

Also on Monday, Trump’s defense team led by Bruce Castor Jr. and David Schoen, filed a written argument in the case that called the trial unconstitutional and “political theater.”

“Taken together, they demonstrate conclusively that indulging House Democrats hunger for this political theater is a danger to our Republic democracy and the rights that we hold dear,” the 78-page brief said.

“All parties have agreed to a structure that will ensure a fair and honest Senate impeachment trial of the former president,” Schumer said. “Each side will have ample time to make their arguments.”

The trial framework calls for four hours of debate Tuesday about whether the case should be dismissed. Trump’s defense team argues that the trial is unconstitutional because he already left office.

But the Senate has already rejected a point of order about whether the trial was unconstitutional, on a 55-45 vote. Congressional Democrats cited precedents about trials of a Cabinet secretary and judges after they left office.

If the case isn’t dismissed, House managers and Trump’s defense team have until 9 a.m. Wednesday to file motions. Responses from the opposing side due by 11 a.m. Arguments on the motions will begin at noon Wednesday.

After motions are resolved, House prosecutors, who are called managers, and Trump’s defense team will present up to 16 hours of arguments spread over two days for arguments. If there are no motions, arguments begin at noon Wednesday.

Schumer said the Senate would honor a request from one of Trump’s lawyers, David Schoen, to avoid working on the Sabbath. The trial will halt at 5 p.m. Friday for the Sabbath and resume Sunday at 2 p.m.

After the arguments are completed, senators will have four hours to ask questions of both sides.

A 51-vote majority of the Senate is required to pass a motion to call witnesses or documents. The chamber is evenly divided, but Vice President Kamala Harris casts tie-breaking votes. But House managers haven’t said whether they will request witnesses.

“If managers decide they want witnesses, there will be a vote on that, which is the option they requested,” Schumer said.

Due to the COVID-19 pandemic, the resolution says senators will not be required to stay seated at their desks on the Senate floor. The chamber’s 100 members can also sit in the public viewing galleries, which hang over the Senate floor, or in a room just off the floor to watch video coverage.

After potential witnesses, the framework calls for each side to deliver two hours of closing arguments. Then the Senate will deliberate the verdict.

“The structure we have agreed to is eminently fair,” Schumer said. “It will allow the trial to achieve its purpose in truth and accountability.”

If Trump is convicted, Schumer said there would be a vote on whether to disqualify the former president from holding future office.

The resolution outlines a quicker trial than Trump’s first trial, but largely mirrors the broad guidelines that have been used for other presidential impeachments.

The resolution for Trump’s trial a year ago over his dealings with Ukraine allowed impeachment managers and the president’s lawyers 24 hours each to present their cases.

Convicting Trump and removing him from office requires a two-thirds vote in the Senate, an unlikely outcome even after Democrats took control of the chamber.

House prosecutors, who are called managers, led by Rep. Jamie Raskin, D-Md., asked last week for Trump to testify under oath. But Trump declined, with his lawyers calling the request a publicity stunt.

“He got an offer to come and testify, he decided not to,” Biden told reporters Monday. “Let the Senate work that out.”

House Democrats are expected to play videos of Trump’s speech, the mob violently smashing into the Capitol and rioters occupying the Senate chamber. Police officers could offer harrowing witness testimony.

Beyond the events of Jan. 6, the article charged Trump with pressuring Georgia Secretary of State Brad Raffensperger to change overturn the election results in his state based on a recorded phone call. Prosecutors could at least play the recording, but might also want to call him as a witness.

But calling witnesses remains contentious because members of both parties want over quickly. Democrats are eager to confirm Biden’s nominees and to adopt legislation dealing with the COVID-19 pandemic. All but a handful of Republicans in each chamber opposed even holding a trial.

Some Senate Democrats, including Georgia Sen. Raphael Warnock, who was sworn in after the riot, are eager to hear as much detail as possible.

“I want a clear record for future generations about what happened on Jan. 6,” said Sen. Dick Durbin of Illinois, the second-ranking Democrat in the Senate. “When I read that 40% of Trump’s followers believe that Antifa was actually in the group that motivated these people to act in a terrorist way, I’m outraged.”

But many Republicans contend witnesses would prolong the trial by weeks or months.

“I don’t think the country needs a whole lot,” said Sen. Lindsey Graham, R-S.C., who noted that House Democrats approved the article of impeachment without calling witnesses. “I guess the public record is your television screen, I don’t know.”

Trump’s defense team argued that the House drafted a flawed article of impeachment because the single charge covered multiple instances of alleged misconduct. The brief also argued that congressional Democrats were trying to silence a political opponent.

“The Senate must summarily reject this brazen political act,” the brief said. “This rushed, single article of impeachment ignores the very Constitution from which its power comes and is itself defectively drafted.”

“There must be no doubt that such conduct is categorically unacceptable,” the House reply said.

Trump’s legal argument also disputed that he remained silent during the insurrection.

House managers in their brief last week quoted a CNN report that Trump was described by those around him as “borderline enthusiastic because it meant the certification was being derailed.”

The House brief also quoted a Vox story that reported Trump was “delighted” and that he was “walking around the White House confused about why other people on his team weren’t as excited as he was.”

At 1:49 p.m., as rioters overcame the Capitol perimeter and after pipe bombs were found at nearby buildings, Trump tweeted: “Our country has had enough, we will not take it anymore, and that’s what this is all about,” according to the House brief.

At 2:24 p.m., Trump tweeted: “Mike Pence didn’t have the courage to do what should have been done to protect our Country and our Constitution,” according to the House brief. The brief noted that Trump singled out Pence as the crowd sought him out and chanted “Hang Mike Pence.”

The defense brief highlighted that Trump tweeted for the crowd to be “peaceful,” followed with a tweeted video urging people to “go home” and do so in “peace.” The brief also said “a flurry of activity” in the White House worked to mobilize security such as the National Guard.

“The House Managers’ suggestion that President Trump did not act swiftly enough to quell the violence is absolutely not true,” the brief said. “He, like the rest of the country, was horrified at the violence.” 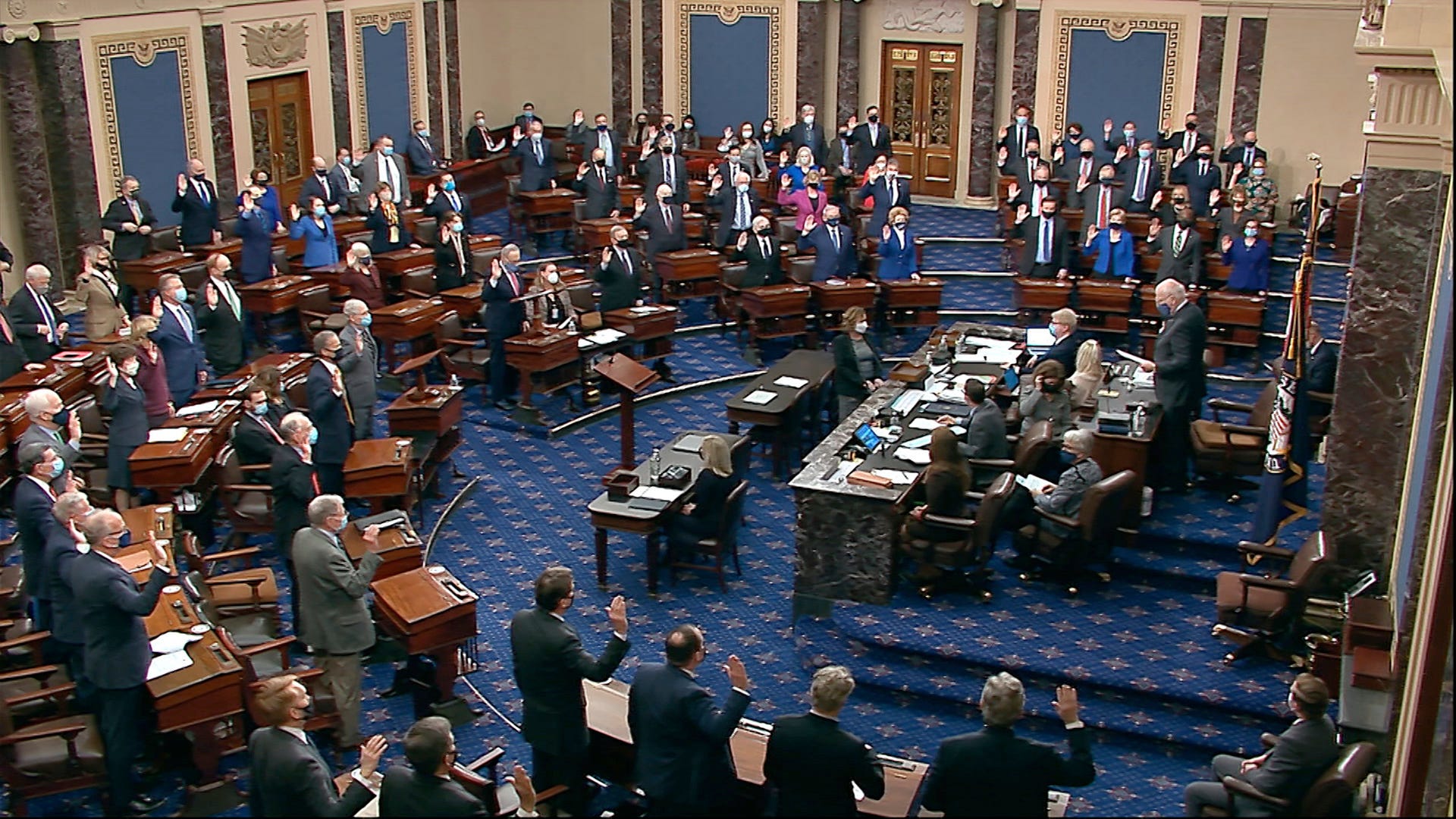