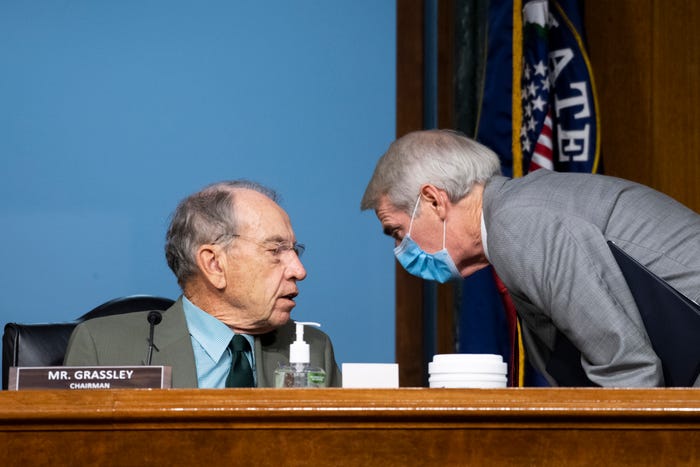 DES MOINES – Citing concerns about the coronavirus, U.S. Sen. Chuck Grassley said he will not attend this year's Republican National Convention, marking the first time he has sat out a convention since he was elected to the U.S. Senate 40 years ago.

Grassley, 86, said he has attended every RNC since he was elected to the Senate in 1980. The conventions are held every four years to nominate the party's candidate for president. This year, President Donald Trump will accept the party's nomination for reelection at a convention in Jacksonville, Florida, which is scheduled for Aug. 24-27.

This year's Republican convention was moved from Charlotte, North Carolina, after Gov. Roy Cooper and Charlotte Mayor Vi Lyles, both Democrats, wouldn't commit to allowing a full convention because of health concerns.

Grassley said it made sense to move the convention from North Carolina since the governor didn't feel it was safe to host a large gathering there.

"Going to a place where the governor feels that it’s safer is probably the right thing to do if you want to have a convention," he said. "And I think we should have a convention, but I think you should do whatever you can to make it as safe as possible so that would mean with face masks and with social distancing."

Since the convention was moved, Jacksonville began requiring face masks to be worn in public and indoor locations as a health precaution. Florida has seen a dramatic uptick in coronavirus cases over the last month, going from 667 new cases on June 1 to more than 10,000 new cases on Monday. The state has seen more than 200,000 total infections and 3,730 deaths as of Monday morning.

Grassley said he plans to visit 29 Iowa counties over the next two weeks as part of his annual 99-county tour of Iowa. He and his staff will wear face masks at the events, he said, but he said he doesn't think he can require others to do so.

When he last held events around Memorial Day, Grassley said those who attended generally either wore masks or kept six feet apart. He said he will encourage attendees to do both.

"There’s generally a rule that if you’re six feet apart you don’t have to wear a mask, but I think doing both makes common sense and I’m going to encourage people to do both," he said.

Stephen Gruber-Miller covers the Iowa Statehouse and politics for the Register. He can be reached by email at sgrubermil@registermedia.com or by phone at 515-284-8169. Follow him on Twitter at @sgrubermiller.

Your subscription makes our journalism possible. Subscribe today at DesMoinesRegister.com/Deal.