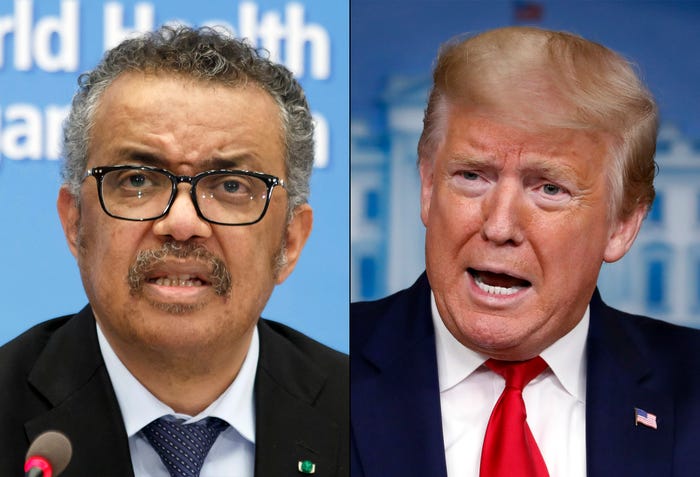 Lady Gaga has called him a “superstar.” Conservatives say he's a shill for China.

Meet Tedros Adhanom Ghebreyesus, an Ethiopian microbiologist and the first African director of the World Health Organization. He is the world's pointman on the Coronavirus pandemic, charged with rallying a unified global response across a politically fractured planet.

But in Washington, the 55-year-old Tedros has become the Trump administration's latest punching bag, with Republicans reviving his past controversies and demanding his ouster.

President Donald Trump has blasted the WHO's handling of the pandemic as "China-centric" and halted U.S. funding for the global health organization. Trump's GOP allies have gone even further, casting Tedros as propagandist for the Chinese Communist Party who bungled the WHO's coronavirus response and needs to step down.

“Director General Tedros is a puppet of the Chinese Communist Party," Rep. Michael McCaul, the top Republican on the House Foreign Affairs Committee, said in a statement to USA TODAY. "Tedros was the CCP’s chosen candidate for the role, and their support for him has paid off ... He used the WHO to trumpet their lies about the virus."

McCaul and 16 other House GOP lawmakers have urged Trump to condition future U.S. funding for the WHO on Tedros' resignation, arguing that he delayed declaring the novel coronavirus a public health emergency, ignored warnings about human-to-human transmission, and "heaped praise" on the Chinese government despite evidence it was hiding the scope and severity of its outbreak.

Tedros' supporters say he is a visionary public health leader and savvy diplomat who has navigated the deadly pandemic – and its accompanying political challenges – as well as he possibly could.

"He's in a very difficult spot," said J. Stephen Morrison, a global health expert with the Center for Strategic and International Studies who has known Tedros for 30 years. As he confronts a "once-in-a-century public health calamity," Morrison said, "he’s getting slammed by President Trump ... and WHO is being singled out and scapegoated."

Morrison and others credited Tedros with acting quickly to facilitate the development and distribution of tests for COVID-19, the disease caused by the novel virus, and negotiating with China for information and access.

"He coaxed China into letting a small team of WHO (experts) on the ground in China, which was no easy task," said Lawrence Gostin, director of Georgetown University's O'Neill Institute for National and Global Health Law.

Gostin has been sharply critical of Tedros in the past, but said he deserves "high marks" for his handling of the coronavirus pandemic.

Tedros – a father of five whose interest in public health was sparked by a personal tragedy – is no stranger to controversy. When he first ran to be WHO's director-general in 2017, Gostin charged that while Tedros was Ethiopia's health minister, the government covered up three cholera outbreaks in the country.

“Dr. Tedros is a compassionate and highly competent public health official,” Gostin told the New York Times in May 2017. “But he had a duty to speak truth to power and to honestly identify and report verified cholera outbreaks over an extended period.”

Tedros denied the charges, and his allies noted that Gostin was advising another WHO candidate at the time. But the Times' story said WHO officials had privately complained that Ethiopian officials were mislabeling the outbreaks and that cholera bacteria was found in stool samples taken by outside experts.

Tedros won the WHO post handily, the controversy eclipsed by his record of success in combating malaria, guinea worm, and trachoma, among other initiatives, when he served as Ethiopia's health minister.

"He's relentless in his pursuit of his objectives," said Morrison. "When he was minister of health in Ethiopia, he launched a program that put over 30,000 health care workers ... into villages all over Ethiopia as a key element of transforming the delivery of services to the most impoverished" pockets of the country.

If Tedros is passionate about public health, it's perhaps no wonder. When he was 7, his younger brother, then 3 or 4 years old, died of an undiagnosed disease – possibly measles.

“I didn’t accept it. I don’t accept it even now,” Tedros told Time magazine in a 2019 interview. In a rich country, his brother would have survived, he has said in explaining his push for universal health coverage.

That lofty goal has now been pushed to the sidelines as he tries to coordinate a worldwide response to COVID-19. Tedros has said he regrets Trump's decision to cut funding for the WHO but he has refrained from directly responding to the president's attacks, saying his focus is on "saving lives."

“When we are divided, the coronavirus exploits the cracks between us,” Tedros said during the WHO's April 15 briefing on the pandemic.