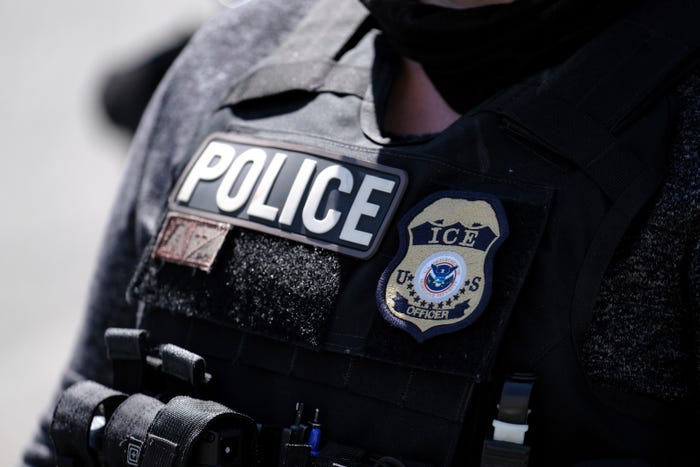 Advocates calling on federal immigration authorities to release detainees amid the coronavirus pandemic staged a protest outside two detention centers in Eloy, Ariz. on Friday.

A caravan of more than 100 cars drove to the two facilities, where advocates said detainees are in grave danger of contracting the coronavirus.

The protest, staged in cars to protect participants from potential spread of the disease, came as the number of confirmed coronavirus cases among detainees in Arizona continues to rise. Detainees also have complained of a lack of soap, disinfectant, gloves, masks and the ability to practice social distancing in the facility.

"We are demanding that ICE release detainees, beginning with the most vulnerable," said Maxima Guerrero, a coordinator with Puente Human Rights Movement, which organized Friday's car rally along with another group, Trans Queer Pueblo.

Because of the close quarters in which detainees are held, detention centers are at risk of turning into "death camps" due to the coronavirus outbreak, she said.

Get daily updates in your inbox: Sign up for the Coronavirus Watch newsletter

Numerous groups have filed a wave of lawsuits around the country that have resulted in judges ordering the release of dozens of detainees from California to Massachusetts to New Jersey.

The number of confirmed coronavirus cases among detainees jumped from one on Monday to five on Friday — three at the Florence Detention Center in Florence and two at La Palma Correctional Center in Eloy, according to statistics posted on the Immigration and Customs Enforcement's website.

The first coronavirus case involving an immigration detainee was reported by ICE on March 30 in New Jersey. Since then, the total number of confirmed cases nationally has soared to 61, as of Friday.

In addition, 19 ICE employees at detention facilities have tested positive for the coronavirus, according to the agency.

Some detainees being held at La Palma Correctional Center began a hunger strike Friday and are refusing to eat because they are "terrified" of catching the coronavirus because at least two detainees have already tested positive, said Abigail Borbon, whose 37-year-old husband is currently being held at the facility.

"They are afraid they are going to be infected," said Borbon, who asked that her husband's name be withheld to protect him from retribution. She said her husband is a legal permanent resident and has been held at La Palma since March 13.

Borbon said her husband also told her court hearings have been suspended at La Palma, and as a result he is trapped there with no chance of being released on bond amid the coronovirus outbreak.

Yasmeen Pitts O'Keefe, an ICE spokeswoman, said "at this time, there are no records of any detainee at La Palma on a hunger strike. Reporting otherwise is misleading."

She confirmed, however, that all court for detainees held at La Palma has been suspended temporarily. Legal visitations, however, continue to take place, she said.

"Non-contact legal visitations are preferred to minimize the risk of exposure, however, if deemed essential, attorneys may request contact visits. Further, La Palma offers a messaging service available for attorneys to leave a message for the detainees as well as a limited appointment schedule for attorneys to speak with their clients," the statement said.

Teresa Gabilla, 38, was released on Thursday from the Eloy Detention Center, a separate facility in Eloy where she had been held since June 30, 2019. There have been no confirmed coronavirus cases at that Eloy facility as of Friday.

Still, Gabilla, an asylum seeker from Cuba, said officials inside the detention center have done little to protect detainees from being exposed to the coronavirus.

She said she was especially worried because she has several pre-existing medical conditions that make her particularly vulnerable to the coronavirus, including hypertension, hyperthyroidism, heart disease and diabetes.

"My defenses are very low," she said.

She said detainees are not given bars of soap. Instead they are given one 2-ounce bottle of shampoo a week, dispensed on Wednesdays. The must use the shampoo to wash hands, shower and wash their hair. If they run out, they must wait until the following Wednesday to receive another bottle, she said.

The amount of shampoo issued to detainees has not increased since the outbreak of the coronavirus, she said.

Detainees used to be given chemicals to disinfect their cells once a day, but recently they were told they facility has run out of disinfectant.

She said detainees try and practice social distancing when they are in common areas, but it's impossible to retain 6 feet of separation as health officials recommend in the dining hall, where detainees are forced to sit shoulder to shoulder.

But she said the restrictions also mean detainees have less access to television news, which they rely on for information about the coronavirus pandemic.

Gabilla said a doctor who was brought in by the detention manager's staff to ally fears about the pandemic told them not to trust everything they heard on the news.

"The detainees are really scared and panicky" especially those with pre-existing conditions, Gabilla said. "They saw this and brought in doctor who told us, "Don’t listen to the news. What they say on the news isn’t true. The news exaggerates.'"

On ICE's website, the agency outlines several actions ICE has taken to minimize the spread of the coronavirus, including identifying people at higher risk of severe illness.

The agency released more than 160 high-risk detainees after evaluating their immigration history, criminal history and potential threat to public safety, the agency said.

In addition, ICE has limited the intake of new detainees being introduced into the ICE detention system. ICE’s detained population has dropped by more than 4,000 individuals since March 1, 2020, with a more than 60% decrease in book-ins when compared to this time last year, the agency said.

As of April 4, 33,863 remain detained in ICE custody, according to the agency's website.