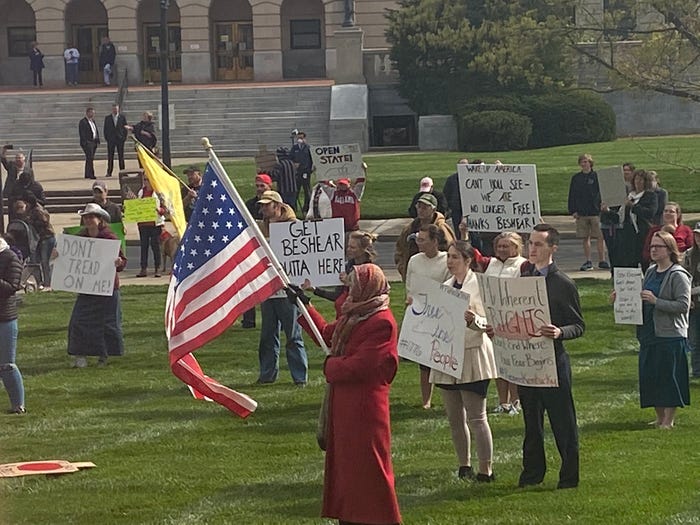 Protests in cities and state capitals exploded around the country last week, with sign-toting and horn-blowing activists urging governors to ease stay-at-home restrictions put in place to combat the coronavirus.

Governors are getting pushback from those who say their constitutional rights are being denied, to the point that threats have been made against the life of Kentucky's governor.

"By these ... unconstitutional acts on the part of Andy Beshear the Constitution protects us and gives us the authority to eliminate him by any means necessary via the Second Amendment," the user wrote.

But the person who made the comments told The Courier Journal in a message Sunday that his post was "NOT threatening anyone."

During his COVID-19 briefing on Sunday, Beshear provided a brief response when asked about the threats, calling Kentucky State Police "an incredible organization filled with great people."

"They provide security for me on a daily basis," Beshear said. "I trust them them. They know what they're doing, and I couldn't be in better hands."

Executive orders by governors to close non-essential businesses, prohibit in-person religious services, force people to stay home or limit travel between states have been called unfair or unconstitutional by those protesting.

Governors insist they are simply trying to save lives, but experts say ensuring safety must be balanced against the liberties spelled out in the Bill of Rights.

"Pandemic is not a magic word that instantly negates all individual constitutional rights," said Jonathan Turley, a law professor at George Washington University.

"A pandemic gives states a compelling state purpose in the imposition of restrictions. But when the state denies or restricts constitutional rights, it must satisfy a balancing test."

The orders can be challenged on the basis that they're overly broad, he said, or that they don't properly weigh the individual restrictions against public health threats.

Turley pointed to Michigan, a state he thinks has an order broad enough that it could be challenged.

On Wednesday, protesters gathered outside the Michigan capital in Lansing and intentionally used vehicles to block traffic on the surrounding streets.

"The important thing to realize is that particularly in the initial phase of a pandemic, the courts will be highly deferential to the states," Turley said. "But that will wane over time."

One restriction that has drawn both protest and push back has been the prohibition of in-person religious gatherings.

Both Turley and Samuel Marcosson, a University of Louisville professor, say that on the surface these restrictions are constitutional, but the details and other orders are the real test.

"If religion is treated the same as and subject to the same rules and restrictions as secular businesses or entities or individuals, that doesn't violate the First Amendment,"

States can even impose restrictions on protests, Marcosson said, as long as the restrictions fall in line with the approach needed for religious ones, particularly that they aren't aimed solely at protests against the orders.

"I don't think there should be any question that dealing with a pandemic that is killing tens of thousands so far in this country alone is a compelling interest — trying to prevent its spread, prevent more people from dying."

On Sunday, Kentucky lawmakers, state officials and others condemned the Facebook threat against Beshear.

Kentucky Attorney General Daniel Cameron tweeted on Sunday that, "Dissent and disagreement are necessary for any healthy government. Threats of violence are not and are unacceptable."

Secretary of State Michael Adams tweeted, "This comment is reprehensible. Our Second Amendment protects fundamental rights; murder is not among them. In a civilized society, we settle our differences with ballots, not bullets."

Statewide stay-at-home orders cover more than 310 million Americans, a vast majority of the country's population. But eight states, all led by Republican governors, have held out.

Governors in Iowa, Nebraska, North Dakota, South Dakota, Utah, Wyoming, Oklahoma and Arkansas have given various reasons for not issuing statewide orders during the pandemic.

Some of the leaders say the specific circumstances of their state do not merit such a mandate, others have advocated for individual responsibility and a few have said they are following the advice of their own state health officials.

Legal experts have said President Donald Trump doesn’t have the authority to impose a national lockdown as the heads of countries such as Italy, Spain, France and Britain have done.

While appearing to egg on some states to loosen up restrictions at times — even tweeting things like "LIBERATE MINNESOTA" and "LIBERATE MICHIGAN" — Trump has otherwise signaled support for leaving decisions up to the states, as of now.

"We have a thing called the Constitution, which I cherish," the president said earlier this month when talking about the possibility of a nationwide lockdown.

On the issue of state vs. federal power in terms of loosening virus-related rules/restrictions, James Hodge, a law professor at Arizona State University and director of the university’s Center for Public Health Law and Policy, said most of that power rests firmly with states.

The country's system of government was set up that way, to give states the predominant central power to protect their populations from public health threats. The federal government, though, does have something states don’t: deep pockets.

The federal government could get into a situation where it tells states to open up or resources and money will be withheld, Hodge said, adding that he believes this is something to watch for as this continues.

Another area where the federal government could get involved and potentially overturn what some states have done is the area of interstate travel, Marcosson said, if the U.S. Congress deems the restrictions being an unnecessary interference with interstate commerce.

Some governors ordered bans on non-essential travel across state lines or implemented mandatory 14-day quarantines for anyone coming to their state from certain areas. Congress could pass a law establishing one, uniform national rule regarding interstate travel during the pandemic.

“But Congress hasn’t done that,” Marcosson said. “And until and unless Congress does that, which seems unlikely, then the states have the authority to deal with this issue.”

New issues could arise once bordering states begin to lift restrictions, which might lead to more quarantines or travel restrictions.

“You can lawfully implement quarantine and isolation measures,” Hodge said.

Turley, the George Washington University expert, said he’s not aware of any orders that have been overturned by courts, but said several related to religious gatherings have been challenged. He added that over time, courts will give less deference to states as the restrictions continue, but that in and of itself doesn’t mean courts will start overturning them.

States and supplies:How a frantic trek to a McDonald’s parking lot shows the scramble states face for coronavirus supplies

“My view would be it’s not a matter of the amount of time that passes, but that when time passes, it may give us more information that could either support one side or the other in making the case that these restrictions are no longer justified under the government’s police powers.”

The various versions of statewide shelter-in-place orders have resulted in protests outside Capitol buildings in states like California, Michigan, Utah, Oho and Kentucky. Numerous conservative groups have emerged at the forefront of the demonstrations in the states, which are led by both Republican and Democratic governors.

Amber Duke, a spokeswoman for the ACLU of Kentucky, said in a statement that Beshear's orders are in line with the government's role to protect the public.

"Nevertheless, while these orders may be constitutional today, these restrictions should not be in place indefinitely, and Governor Beshear and his advisors should regularly reevaluate the use of this emergency power," she said.

Outside of the Statehouse in Columbus, Ohio, for example, one protester questioned whether Gov. Mike DeWine was truly a Republican, asking, "Don't (they) believe in less government? Small government?"

In Wisconsin, meanwhile, nearly a thousand people packed along a road Saturday in the Republican stronghold of Brookfield to protest a decision by Democratic Gov. Tony Evers to extend the state's "safer-at-home" order until May 26.