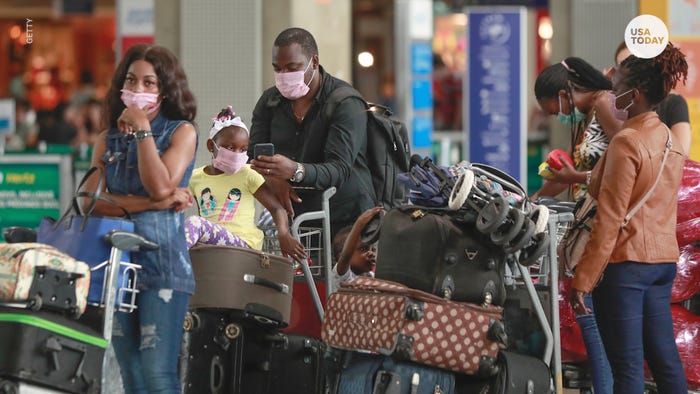 Experts have now forecast that there will be 179,106 COVID-19 deaths in the United States by Oct. 1. But a universal mask wearing order in the US could save as many as 33,000 lives.

The University of Washington’s Institute for Health Metrics and Evaluation forecast released a model Wednesday with a range of 159,497 to 213,715 deaths nationwide.

Institute Director Dr. Chris Murray, however, said that mask wearing has a “profound effect” on the epidemic.

Wearing a mask “is extremely low-cost, and, for the individual, provides a 1/3 — as high as one half — reduction in the risk of transmission,” he said in a video press release. “But at the community level, can save an extraordinary number of lives.”

The projection also comes as more than 36,000 new infections were reported by state health departments Wednesday, surpassing the previous single-day record of 34,203 set on April 25.

While the Centers for Disease Control and Prevention advised “the use of simple cloth face coverings to slow the spread of the virus” in April, in recent weeks states have started to relax their policies.

But as of mid-June, wearing face masks in public has prevented up to 450,000 new cases, according to a study by Health Affairs journal.

In a Facebook live with the Sacramento Press Club Wednesday, the nation's top infectious disease expert Dr. Anthony Fauci said that "everybody should wear a mask when out in public."

"It should not be a political issue," he added. "It is purely a public health issue. Forget the politics, look at the data."

Arizona, California, Texas, Florida, Oklahoma and South Carolina reported record-high new daily coronavirus cases during this week, as case counts continue to rise in more than half of U.S. states.

Murray said, however, deaths are not yet rising at the same rate as infections.

"States reporting the ages of confirmed cases suggest there are more cases being detected in younger people who are at substantially lower risk of death than older people," Murray said. "It remains to be seen how this will unfold over the next few weeks, and if transmission continues to go up, we may see increasing infections in at-risk populations."

The CDC said that “a cloth face covering may not protect the wearer, but it may keep the wearer from spreading the virus to others.” By wearing a cloth covering in public, the spread of the virus can be slowed by lessening the transmission to others.

The CDC has also released instructions on creating homemade masks.

“Simple cloth face coverings can be made at home and may help prevent the spread of COVID-19,” the site reads.