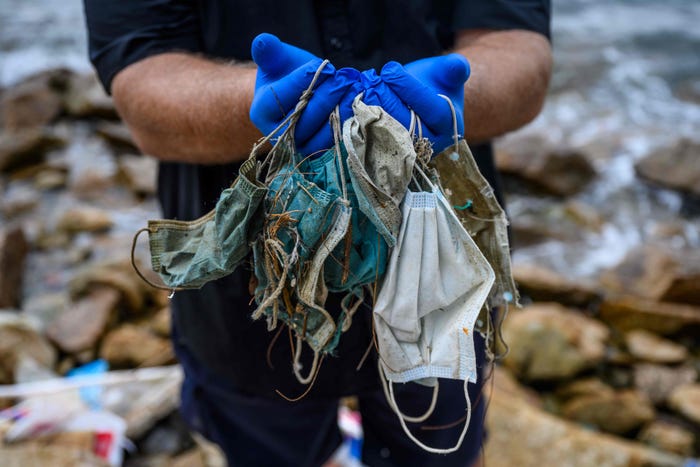 Environmental organizations are raising alarm about growing ocean pollution caused by increased waste created out of the coronavirus pandemic.

Millions of people around the globe have donned disposable face masks and latex gloves, and while it helps slow the spread of the virus, they also may be disposed of incorrectly, groups warn.

In a video posted on Facebook, Laurent Lombard of Opération Mer Propre, a French non-profit that works on ocean cleanups, according to the Guardian, wrote that "soon there will be more masks than jellyfish in the waters of the Mediterranean."

Lombard's video showed disposable gloves and masks littering the bottom of a seabed off the coast of Antibes on the French Riviera.

Joffrey Peltier of Opération Mer Propre told the Guardian that divers have begun to notice more "Covid waste," or masks, gloves and plastic bottles of hand sanitizer. While the quantities have not been overwhelming, "it's the promise of pollution to come if nothing is done," Peltier told the newspaper.

"On a beach about 100 meters long, we found about 70," OceansAsia's Gary Stokes told the newspaper. Thirty more masks were found a week later, he said. "And that's on an uninhabited island in the middle of nowhere."

Environmental activists have warned about pollution in oceans for years. A United Nations report from 2018 found that roughly 13 million metric tons of plastic pollute the ocean every year. That pollution can harm biodiversity, the economy and health, the UN report says.

While there is concern over increased waste from single-use products during the pandemic, other areas of the environment have seen improvement in recent weeks.

Photos and video shared on social media have also shown animals able to roam more freely in areas usually otherwise populated by humans. Lions were seen sunbathing on the road of a closed national park in South Africa, and a group of goats took over the streets of a mostly deserted Welsh town.