INDIANAPOLIS -- It is "reckless" to move forward with the Big Ten Tournament and "from a public health perspective, the tournament organizers should reconsider," a legal expert on law and health said Wednesday.

"Large sporting events like these are prime candidates for passing on the (corona)virus — we must all be on the lookout for each other in these times and sacrificing a couple of sporting events seems a small price to pay," said Nicolas P. Terry, professor of law and executive director of the Hall Center for Law and Health at Indiana University Robert H. McKinney School of Law.

The Big Ten said Wednesday it was moving forward with its conference tournament at Bankers Life Fieldhouse, starting at 6 p.m. with the Northwestern-Minnesota game, followed by IU versus Nebraska. Tip-off will come just hours after the NCAA announced it will conduct the men's and women's tournaments without fans -- only essential personnel and limited family members. 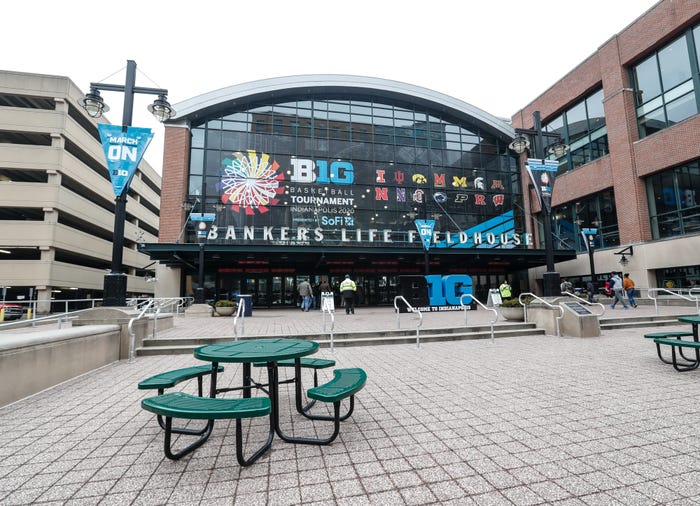 The Big Ten or (Bankers Life Fieldhouse) could, in theory, be held liable should a person contract the coronavirus at a game, said Allison K. Hoffman, an expert on health care law and professor at Penn Law School in Philadelphia.

The challenges a person would face in doing so are twofold, she said. First, the person would have to be able to prove COVID-19 was transmitted at the game and not spread elsewhere. They would also have to prove it was unreasonable for the Big Ten to continue holding the games, considering the growing number of cases and the risk of serious harm, such as death or spread of disease.

"(Since) some games are being cancelled or held without fan attendance, it suggests that such practices might be advisable at this point," Hoffman said.

In a move that could have spurred the NCAA, Ohio Gov. Mike DeWine on Wednesday changed an earlier recommendation to an order that indoor sports events there be played without spectators to lower the risk of spreading coronavirus. Ohio is scheduled to host the play-in rounds of the NCAA men's tournament next week in Dayton and first- and second-round games the next weekend in Cleveland.

If Indianapolis, Marion County or Indiana government leaders were to advise against such gatherings — and the Big Ten continued the tournament — that would increase the potential for liability, she said.

The Marion County Public Health Department has not recommended canceling large public gatherings. But Wednesday the director of the department, Virginia A. Caine, said in a statement that seniors, especially those who have chronic medical illness, should avoid such events.

Fans assume the risk? Maybe not

While fans are said to “assume the risk” of injury from attending sporting events, it’s not clear that doctrine would extend to non-sport related harms, Hoffman said. That would typically apply to something such as being hit with a stray hockey puck or baseball.

It could also be argued that even if the Big Ten or Bankers Life were not being careful enough, the fans knew the risk of attending, she said. That could limit, but might not extinguish, the liability.

At this stage, Terry said, he believes sports teams, facilities, leagues and conferences making the decision to continue with sporting events have relatively little legal risk.

"(However), if we get the bump in cases (of coronavirus) that I expect over the next two weeks that could change," he said.

Certain legal ramifications could come, he said, if "an employer who knows or reasonably should know that some employees are COVID-19 positive and still exposes the public to them. There may also be legal risk for employers and entities who don’t properly train their staff in risk-reduction strategies."

Pacers Sports & Entertainment and Bankers Life said there are measures in place to help prevent the spread of viruses, including cleaning and disinfecting exposed surfaces, and posting reminders to patrons to cover coughing and sneezing and to frequently wash hands with soap and water.

There are hand sanitizer stations throughout the arena for fans.

Terry said he would be leery of any kind of food preparation areas where multiple people might touch the food, including concession stands at the Big Ten games.

Mark Emmert, president of NCAA, said Tuesday that it is not his organization's call on whether to play individual basketball tournaments, with or without fans; rather it is up to the Big Ten and its schools to make those decisions. 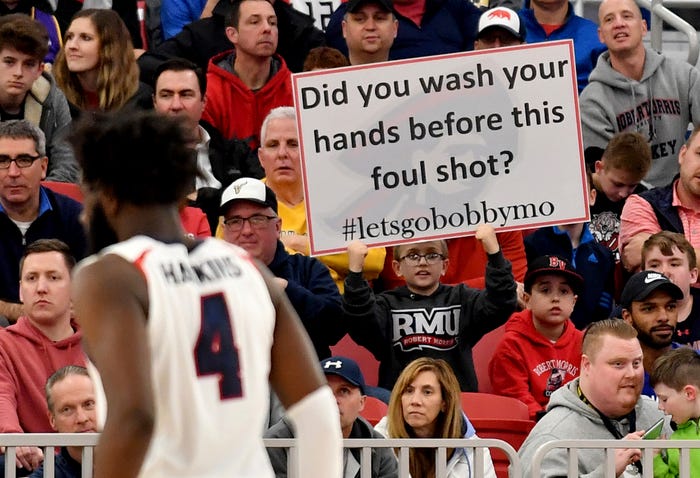 At the Northeast Conference men's tournament title game Tuesday, a Robert Morris fan held up a sign that read: "Did you wash your hands before this foul shot?"