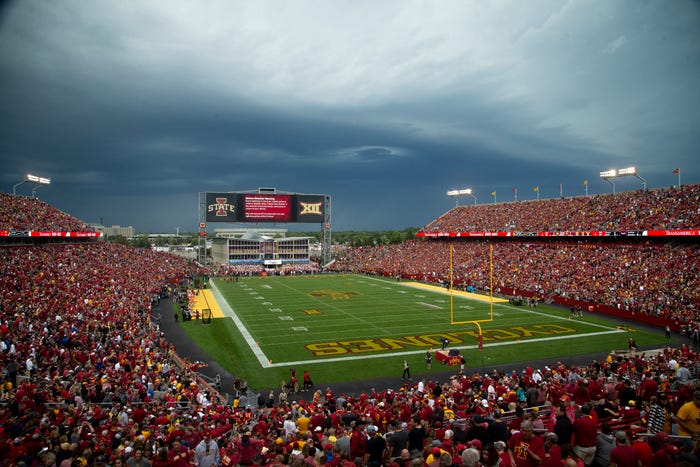 The university revealed the number in a statement after Story County health board chairman Dr. John Paschen said he suspected the ISU athletics department was tied to a recent sharp rise in the county's confirmed coronavirus cases, according to an Ames Tribune story published Friday.

“While I cannot confirm this by any means, I’m suspicious that a lot of these cases are coming from ISU athletics, just because we’re getting printouts of ages and it makes the most sense to me,” Paschen said.

Also Friday, Steve Sullivan, a spokesperson for Mary Greeley Medical Center in Ames and Story County Public Health, said that over the past seven days, health officials have seen an increasing number of cases among individuals ages 20-25.

“That (age range has) been the majority of the reported cases — at least half," Sullivan said. "We haven’t seen these types of numbers in the 20-to-25 age range, and they began popping up at this level and rate within the last couple of weeks.”

Iowa State athletics announced June 3 that a part-time student worker had tested positive for coronavirus. It also said that four student-athletes had been quarantined when they experienced COVID-like symptoms after having contact with an infected person outside the department.

Opinion:We might be seeing a wild, wild west of college football and coronavirus testing

Friday's statement from Angie Hunt, ISU news service director, said none of the 10 student-athletes who tested positive for coronavirus was "participating in team activities at the time they were exposed to COVID-19."

The statement said that since that exposure, "all football team members returning to campus have been tested. Of the 147 players and staff tested, only two of the returning players have tested positive for COVID-19."

It added that the athletic department "is taking a number of precautions and has protocols for contact tracing as well as isolation to limit the spread of illness."

It also said that "the university feels strongly about balancing the privacy of our student-athletes and being transparent as well as avoiding speculation on case numbers."

The statement did not outline any further action.

Before ISU released a statement Friday, Iowa State Senior Associate Athletics Director Steve Malchow told a Tribune reporter that the department had nothing new to report about coronavirus and hung up when pressed for details. Mike Green, assistant athletic director for communications, said he could neither confirm nor deny there were additional coronavirus cases in the department and said test results were expected this weekend or Monday.

Paschen, contacted after the university released its statement, said it added to his concern that the university may not be doing enough to prevent the spread of the coronavirus.

"This is what keeps me up at night in regard to COVID, is ISU and students, and if Iowa State doesn't take a hard stance and say you can’t be in a class unless you have a mask, we’re going to get more of it," he said.

He said he was encouraged to hear that the university is isolating the athletes who tested positive, "but I wonder if they enforce it. That means they can’t practice together, they can’t work out together. .... I bet a bunch of them live together but if they’re all self-isolating for 14 days, hopefully they’re not going to the bars at night."

In a June 3 news release on the earlier confirmed case, ISU Athletic director Jamie Pollard said a coronavirus diagnosis in the department “is not a great surprise.”

“The potential for infections and positive test results has always been very real for an organization like ours and we’ve been thorough and diligent in planning for such incidents,” Pollard said. “Our medical team, headed by Mark Coberley, has done a magnificent job in preparing protocols and procedures for countless scenarios related to the virus.”

On Friday, the Iowa Department of Public Health reported 25 new cases of COVID-19 in Story County — the second time this week the county has recorded its highest number of cases for a single day. Friday's confirmed cases brought the county's total for the past seven days to 68, by far the most recorded in a single week.

Story County has reported 205 confirmed cases since the pandemic began.