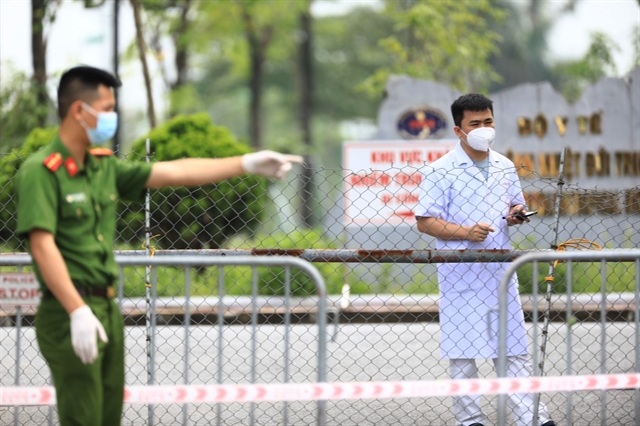 Barriers and police-managed checkpoints were set up around the Kim Chung facility of the National Hospital for Tropical Diseases in Đông Anh District, Hà Nội, on May 6 as the hospital was locked down after a dozen COVID-19 infections were found. — VNA/VNS Photo

The National Institute of Hygiene and Epidemiology on Tuesday announced the results of the genetic sequencing for eight samples taken from COVID-19 patients submitted by four northern localities – two from Vĩnh Phúc Province, two from Bắc Ninh, two from Lạng Sơn, and one from Nam Định – and the Indian strain showed up in seven.

The variant B1.617, which the World Health Organization (WHO) classified on Monday as a “variant of concern,” has demonstrated higher spreading capabilities among humans, according to some preliminary studies, but further research is still needed to explore the variant’s transmissibility, disease severity and whether it could make existing COVID-19 vaccines less effective.

An official from the tropical diseases’ hospital in Hà Nội – its second facility in Đông Anh District currently under lockdown – said the origin of its current outbreak could come from the COVID-19 treatment wing, infecting patients in other faculties and patients’ family relatives who came to take care of them from many northern localities.

Earlier in the month, the institute’s genome probe also indicated the outbreak related to Sunny Club in Vĩnh Phúc, which is caused by two visiting Chinese experts who in turn have likely contracted the disease from another group of Indian experts during the time they stay at the same quarantine hotel in Yên Bái Province, is of Indian variant.

The other sample from a COVID-19 patient in Hải Dương who has illegally entered Việt Nam from Laos showed the B1.1.7 variant which was first reported in the UK. — VNS