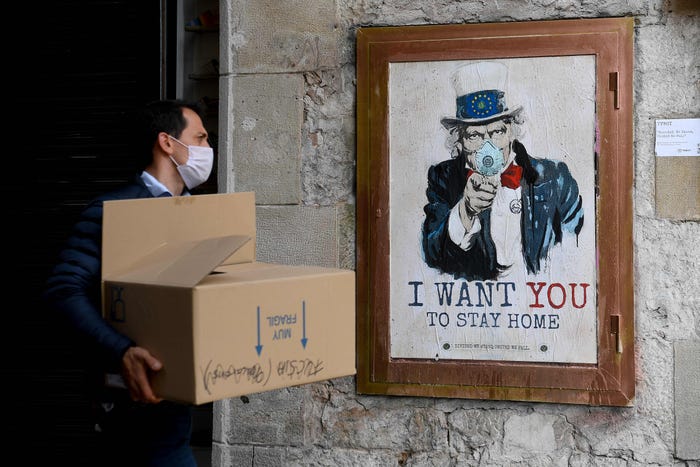 The craggy, whiskered face under an outlandish top hat glares directly at the viewer with a pointed index finger to emphasize the words "I want you." The Uncle Sam recruitment poster employed during World War I and later World War II could — and perhaps should — be dusted off to motivate a new generation of volunteers for a new type of war. The nation will need them for what President Donald Trump has labeled a battle against an invisible enemy, the coronavirus. As infections appear to be peaking in major metropolitan areas and states begin relaxing social distancing, America might well require an army of what are called "contact tracers" to guard against a COVID-19 counterattack.

Contact tracers are a crucial part of a health response to any contagious disease. But they need not have medical training. They act more like investigators. With skills that can be easily taught, contact tracers interview the newly infected to learn who else that person might have been in contact with during the previous two weeks (the incubation period for COVID-19) and then reach out to that circle of people to alert them that they were exposed to coronavirus and urge that they isolate themselves for two weeks.

If any among this second tier are infected, the volunteers would interview them to learn identities of yet another circle of contacts and repeat the exercise. This low-tech process could be supplemented with cellphone apps being developed by Apple and Google.

Short of a vaccine or effective treatment, this "test, trace and isolate" process is how infection chains are broken and new coronavirus outbreaks tamped down.

HHS:Trump administration putting boots on the ground to help states

Contact tracing is a time-honored health procedure dating to at least 1937, when the U.S. Surgeon General first used it to combat the spread of syphilis. It was employed effectively during the Ebola scare in 2014.

The U.S. Centers for Disease Control and Prevention attempted to use contact tracing in February, when only 14 cases of coronavirus had been identified. But because of a slow federal response and a lack of testing kits, the highly contagious disease rapidly spread beyond those containment efforts. Contact tracing quickly gave way to a desperate effort to "flatten the curve" to prevent hospitals from being overwhelmed with COVID patients.

Testing has since ramped up, and with the nation's success at social distancing, the numbers of infections appear to be ebbing.

A new report released by the Johns Hopkins Center for Health Security estimates that, to prevent a resurgence, the United States would need at least 100,000 contact tracers spread out across the country in a mobilizing effort led by counties and states, with guidance and coordination from the CDC and funding from Congress.

'Time is of the essence'

If Americans long to get out of their homes and resume some sense of normalcy in the months before a vaccine is developed, say the authors of the Johns Hopkins analysis, contact tracing is the key. "Time is of the essence to get contact up and running," according to co-author Anita Cicero, deputy director of the Center for Health Security.

The analysis argues that people hired as contact tracers could earn the average wage of a community health worker: $17 an hour, useful income at a time of high unemployment. Public health graduate students could be candidates. The cost nationwide would amount to about $3.6 billion, money Congress should allocate.

On Monday, bipartisan health leaders led by Andy Slavitt, former director of Medicare and Medicaid in the Obama administration, and Scott Gottlieb, a former Food and Drug Administration commissioner in the Trump administration, called on Congress to spend $12 billion to help expand the contact tracing workforce by 180,000 people until a vaccine becomes available.

Some states, including Alaska, Georgia and Oklahoma, are riskily relaxing social distancing measures with only limited or nascent tracing programs in place.

National leadership is needed to promote contact tracing and to coordinate a broad effort.

People who want to enlist should look to their local and state health agencies for where to sign up. And here's an idea: a revised recruitment poster with an artist's rendering of the nation's most noted expert on COVID-19, Dr. Anthony Fauci, pointedly telling us "I want you" to serve as a contact tracer.

If you can't see this reader poll, please refresh your page.

More:Share your coronavirus story. We may publish your comments.