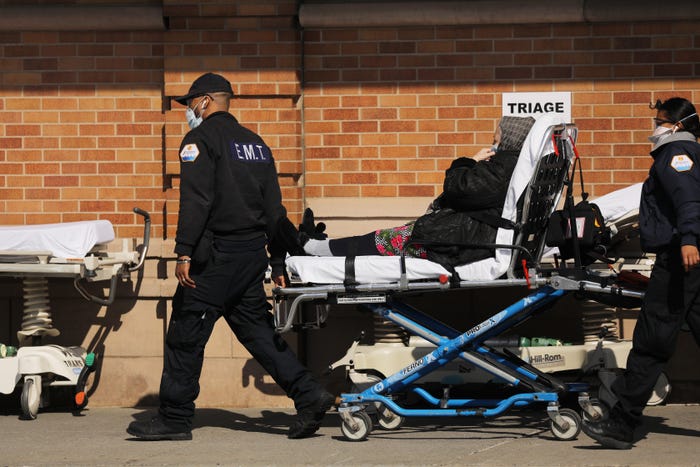 A person today is no more likely to get COVID-19 from a newly arrived immigrant than a next-door neighbor. President Trump would like you to ignore that fact, and his late-night announcement via Twitter that he plans to temporarily suspend immigration into the United States not only does nothing to make America safer, it will wreak further havoc on our economy, making it more difficult to recover after COVID-19.

Immigrants make up a disproportionate number of the essential service workers critical to protecting America’s most fundamental and basic needs. Further, immigrant talent is key to fueling the future innovation we so desperately need. Whether it’s in the laboratories developing rapid diagnostic tests or testing vaccines; or innovating completely new ways of doing business in a post-COVID word, immigrants are a key piece to solving this problem. There is abundant evidence that immigration will improve the resilience of the U.S. economy over the long-term.

We need them now more than ever.

We should promote immigration instead of suspending

The most pressing immigration problems are not immigrants coming to our country; it’s making sure that we have the pathways to retain and attract the talent that we need now. If the Trump administration really wants to improve the country’s resilience in the face of the pandemic, it would take these three actions to promote immigration:

First, we must find ways to allow immigrant doctors, medical researchers and other health care workers to help in the fight against COVID-19. Current visas restrict the ways these health care workers can move around the country, work for different employers, or work in areas that are not directly related to their training. We need those who are willing and able to travel to the hotspots. We need to expedite the processing of their visa applications. And we need to make sure that we aren’t sending people home who could help us fight the pandemic.

Second, we should authorize the work of the countless health care workers and agricultural workers who are now toiling away in the shadows, anxious about falling ill or into the hands of immigration and customs enforcement officials. A significant proportion of this population, vital to securing the nation’s food supply and caring for our loved ones, do not have legal status in the country. We should not ask them to risk their lives to protect U.S. citizens while leaving them in danger of workplace raids and deportation.

Finally, we cannot turn our backs on those who have been waiting in lines, many for years, for their green cards. Trump officials claim his action is motivated by protecting American jobs. The evidence shows, however, that immigration has been key to revitalizing ailing American cities. Immigrants consistently fill important labor replacement needs and overall they help grow and expand the U.S. economy.

Shutting down immigration will do nothing

It is seductive to argue that shutting down the U.S. borders will make Americans safer, but the logic is faulty. First, immigrants make up a small fraction of the foreign nationals who travel into and out of the United States every year. Most of the travelers are visitors — and once the most acute phase of this pandemic passes, many cities will be desperate to see the revenue that travel and tourism brings. Second, one-third of the diagnosed cases worldwide are now in the United States. The infection continues to spread throughout American communities. While New York has been hardest hit, vast swaths of the country are still trying to come to terms with what it will mean to contain the infection. Shutting down immigration will do nothing to improve the response in communities across the country.

Trump’s suspension of immigration is an attempt to shift the spotlight away from his own poor leadership. He doesn’t want people to pay attention to the inadequate numbers of diagnostic tests and the spiraling economy. He is hoping the American people will ignore his decision to shut down the White House office to protect global health, to throw away the Pandemic playbook, to ignore the early warnings raised by his advisors, and to cut the programs designed to predict the next pandemic — all measures put in place during the Obama Administration to better protect the American people. Rather than taking any responsibility, he blames the Chinese, the Democrats, the Governors, and now immigrants. If he gets away with this move, he will affirmatively harm the U.S. economy’s ability to bounce back from this crisis.

Continuing to admit immigrants is an investment in the future of America — which will be needed more than ever once we get to the other side of this pandemic.

Amy Pope is currently a Partner at Schillings,a law and consulting firm in London, U.K.. She previously served on the National Security Council staff, most recently as U.S. Deputy Homeland Security Advisor to President Obama.