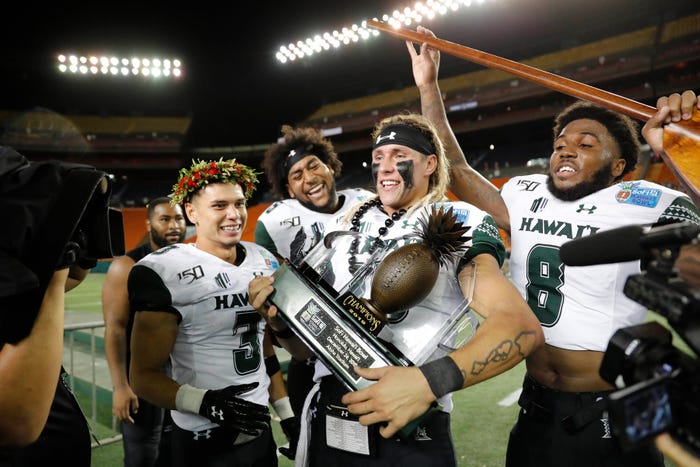 The fate of college football’s bowl industry has not exactly been a front-burner topic during the COVID-19 pandemic, particularly given the myriad obstacles schools face in merely resuming college football this fall.

But assuming there is a season, the bowl industry says it collectively stands ready to hold a full postseason — whenever that might occur.

“It’s important that the bowl system as a whole says in the conversation,” said Nick Carparelli, a former Big East/American Athletic Conference associate commissioner and Under Armour executive who took over as executive director of the Football Bowl Association earlier this year. “We are not in position to be dictating how all this is going to unfold, but we’re remaining patient and we’re prepared to be flexible.”

Could that mean bowl games in January and February, or even as late as May if some of the more extreme models for a college football season end up coming to fruition? Conceivably, according to Carparelli and a handful of bowl executives contacted by USA TODAY Sports.

At the same time, the dynamics surrounding how this season might play out could be a financial blow to some bowl games, which are typically anchored to corporate sponsorship, hospitality events surrounding the game and tourism during the holiday season.

There’s also a legitimate question about how bowl games will fit into a schedule where some conferences may start and finish the season at different times and whether there would be anywhere close to enough teams to fill the 44 postseason games scheduled for this season, which is three more than last year after new bowls were approved in Los Angeles, Myrtle Beach and Fenway Park in Boston.

“Some people would argue that bowl games have become more and more made-for-TV events so the crowd in the stadium isn’t as important, but there’s a whole issue of flying to a city for five, six, seven days, going to all these events and a lot of people may look at that skeptically,” said Gary Cavalli, who retired as executive director of the Foster Farms Bowl (now RedBox Bowl) in 2015. "If I was a bowl director, it’s something I’d be concerned about.”

SPORTS, DELIVERED:Get the latest sports news right in your inbox. Sign up here.

WHEN TO OPEN UP:College football may be a religion. But science should decide its future.

Though the bowl industry has collectively bemoaned its second-tier status since the advent of the College Football Playoff, bowls outside the New Year’s Six still generate enough revenue to distribute $92 million to conferences. But in addition to securing lucrative television deals, their financial model is also dependent on schools that participate in the games agreeing to buy a set number of tickets that it is their responsibility to sell. According to a USA Today study, schools had to eat a combined $25 million in unsold bowl tickets in 2017.

In an April 27 letter to NCAA president Mark Emmert, the Knight Commission on Intercollegiate Athletics recommended “more fiscally responsible bowl-game certification criteria,” citing the financial issues schools are facing during the pandemic. Among those recommendations were eliminating ticket purchase requirements and the bowl game paying for team travel, food, lodging entertainment and awards.

Though athletics departments across the spectrum of FBS are in the process of cutting expenses for the coming year and many coaches have accepted salary reductions, it’s highly unlikely skipping bowl games would be on the table as a cost-saving measure, according to administrators contacted by USA TODAY Sports. Admittedly, though, planning for bowl games at this point is pretty far down the list of issues schools are trying to get their arms around.

There’s also a pretty long runway for the games themselves, and they will naturally have to follow whatever course the season itself takes, including both timing and whether fans are allowed in stadiums.

“If we had to make a move we’d do it,” said Liberty Bowl executive director Steve Ehrhart, whose Memphis-based game is contracted with the Big 12 and SEC. “I can’t speak for other bowls, but just like the conferences, there could be different circumstances in different parts of the country, so in our position just for us, we’d work with our conferences and say what makes the most sense for us as a partnership. There’s so much time, and the information changes every week so we’ve just said we’re continuing to do our business here and we’ll be ready.”

Carparelli said there’s been “unanimous support” in his conversations with conference officials to have a full bowl slate and that the games are doing their due diligence on potential stadium availability if the season got pushed back.

Mark Neville, who runs the Holiday Bowl in San Diego, said his organization would be nimble enough to accommodate a game no matter when it needed to be played.

“Right now we’re planning on playing the bowl game here in San Diego in late December, and if we need to pivot away from that, we will,” he said. "This is an extraordinary year, so for us, we’re going to prepare, but we have to be flexible. There’s so many things we don’t control, and we just need to be as prepared as possible for whatever scenario plays out.”