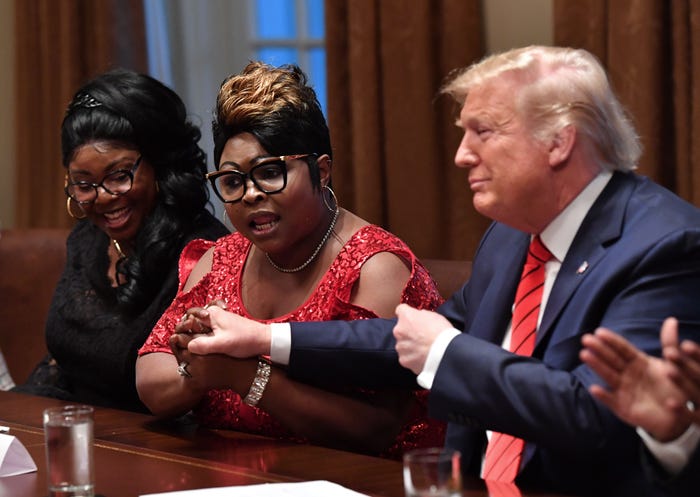 President Donald Trump tweeted his support Tuesday for Diamond and Silk, two of his most outspoken promoters on social media who have recently sparked outrage by promoting conspiracy theories around the coronavirus outbreak that has killed more than 56,000 people in the U.S.and more than 212,000 around the world.

On Monday, The Daily Beast reported that Fox News was severing ties with the sisters, who stream a weekly show for Fox Nation. A new episode has not posted on the Fox Nation website since April 7, the first time they missed a week since December 2018, according to The Daily Beast. The online news outlet also said they had not made a Fox News appearance since a March 6 "Fox & Friends" interview.

Lynette Hardaway (Diamond) and Rochelle Richardson (Silk) did not directly address the report, but Monday night they tweeted, "Haters keep saying they hate Diamond and Silk, but you can't hate what you ain't never loved!"

"But I love Diamond & Silk, and so do millions of people!" Trump tweeted in reply to Hardaway and Johnson, who have 1.4 million Twitter followers and 1.8 million more on Facebook.

"We love you more," they tweeted back.

The Trump campaign is also standing by the women.Hardaway and Johnson are co-chairs of black-voices for Trump and Women for Trump board members, according to the campaign.

“Diamond and Silk are tremendously valued supporters of President Trump," a Trump campaign spokesperson said in a statement. "They fight for the President and are continued valued members of Team Trump.”

Hardaway and Johnson stirred controversy by endorsing a range of unsubstantiated theories about the pandemic. Earlier this month, Twitter locked their account for promoting misinformation about the coronavirus after the sisters, who oppose stay-at-home orders, told their followers, "Quarantining people inside of their houses for extended periods will make people sick."

In one video, they made the scientifically suspect claim that many people were experiencing symptoms because the news media had "sensationalized" the outbreak.

"People are getting more sick off of the media than the virus," Richardson claimed without evidence. "They catching fever from the media!"

They have also claimed, without evidence, that celebrities were being paid to say they had COVID-19, that the death toll from the outbreak was being inflated to hurt Trump (a claim also made in a post retweeted by the president on Sunday) and implied Bill Gates' desire to fund a vaccine was motivated by a desire for "population control."

Like Trump, they were convinced that the anti-malarial drug hydroxychloroquine could be used to treat COVID-19 and said that concerns about its use were politically motivated. Last week, the Food and Drug Administration issued a warning that hydroxychloroquine should not be used outside of a hospital or clinical trial and said the drug has not "been shown to be safe and effective for treating or preventing COVID-19."

Hardaway and Johnson also asserted the virus was "engineered" by "the Deep State" or the World Health Organization, presumably to embarrass Trump.

"We are the United States, not Communist China," they tweeted Monday. "This Deep State experiment that we've all been suckered into must end or we will no longer have our freedoms or our country."

Fox News did not reply to USA TODAY's request for comment.

Hardaway and Johnson came to prominence on YouTube with videos praising Trump and lambasting his detractors. They quickly gained the president's attention. He first referenced them in a December 2015 tweet, telling them they were "awesome." The next month, he called them onto the stage at a rally in Des Moines, Iowa.

Even then, they were no strangers to controversy. During a February 2016 interview with CNN, they implied one of Trump's leading primary opponents was gay, a rumor promoted online by the likes of InfoWars conspiracist Alex Jones and the Daily Stormer, neo-Nazi site.

They have accused social media companies of trying to censor them because of their conservative views and in April 2018 they warned the House Judiciary Committee an unchecked Facebook CEO Mark Zuckerberg could become a "dictator," during a hearing which Rep. Ted Lieu, D-Calif., called "stupid and ridiculous."

They remain Trump campaign fixtures. After calling the duo onto the stage at a March 2 rally in Charlotte, North Carolina, Trump reminisced about the day his wife, Melania, brought them to his attention.

"She said, 'You know there are these two women on the internet, they're unbelievable,'" Trump said. "I said, 'Let me see.' I saw them. I fell in love. And everybody fell in love with Diamond and Silk."