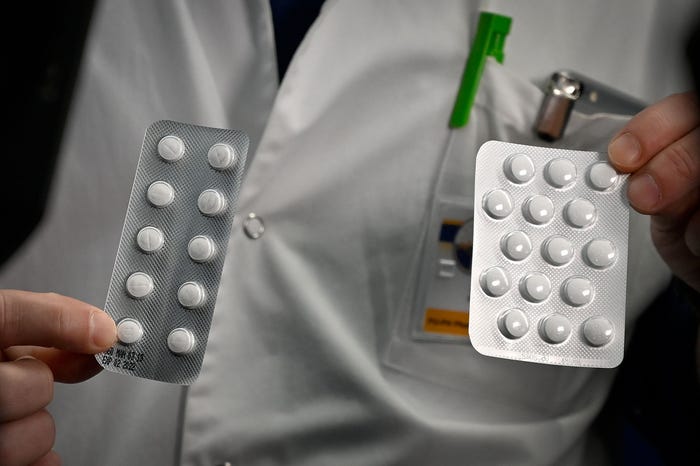 Patients have been desperate for drugs that can treat or prevent COVID-19 – but experts on Tuesday cautioned against the approach that President Donald Trump said he is taking.

On Monday, the president said the White House physician has prescribed him hydroxychloroquine, a drug commonly used to prevent and treat malaria and address autoimmune diseases, like rheumatoid arthritis and lupus.

This drug has shown enough promise on viral cells in a dish that it is now being tested across the globe to treat and reduce the risk of infection with SARS-CoV-2, the virus that causes COVID-19. Early results of those tests, however, have raised serious concerns about the drug’s safety, especially for people with heart conditions, while showing that it is unlikely to help those with the most severe responses to the coronavirus.

“The sense of most of my colleagues is that hydroxychloroquine is useless,” said Otto Yang, an infectious disease specialist at Ronald Reagan UCLA Medical Center in Santa Monica, Calif.

Hydroxychloroquine works against all kinds of viruses in a test tube, including the flu, HIV, chikungunya and dengue, he said. But that effectiveness does not seem to translate to people – either to reduce illness or, in at least one flu trial, to prevent it.

“In clinical trials against all of those, it completely failed. I don’t see any reason that it’s going to be different for this virus,” he said. “We need to move on.”

The decision to take any drug requires considering both the risks and benefits. In this case, doctors said, using hydroxychloroquine to treat – or attempt to prevent illness – may be substantially worse than doing nothing.

That’s because hydroxychloroquine can cause dangerous heart rhythm abnormalities. On April 24, the US Food and Drug Administration warned against its use outside of a hospital setting or clinical trial: “Hydroxychloroquine and chloroquine have not been shown to be safe and effective for treating or preventing COVID-19.”

The drug can also cause side effects like diarrhea and eye problems that could be confused with COVID-19 and might just add to a patient’s anxiety, said Jacqueline Fincher, president of the American College of Physicians, who runs a private practice in Thomson, Georgia.

Fincher said she’s only had a few patients ask about hydroxychloroquine so far, and they were more curious about what she thought than in taking it themselves.

She prescribes the drug to patients with autoimmune conditions such as rheumatoid arthritis and lupus, or short-term to people going on a mission trip, for instance, to areas with malaria. But she wouldn’t consider giving it to people who are otherwise healthy but afraid of COVID-19. Many of her patients who are most at risk for severe cases of Covid-19 are older and already have heart conditions or take medications that could exacerbate the side effects of hydroxychloroquine.

“I’m not sure why [Trump] has latched onto this, but I think it’s concerning in that you know other people will say ‘if it’s good enough for the President, it’s good enough for me,’” she said. “We don’t want people to die of cardiac dysrhythmia, because they were trying to prevent COVID. That would just be awful.”

Aaron Glatt, chief of infectious diseases at Mount Sinai South Nassau in New York, said he prescribed hydroxychloroquine early in the pandemic, when there were no other options and because “we were seeing people die all around us.” It was worth it while the drug was being studied, he said. But now, with more data raising questions about the drug’s safety and no evidence to suggest it’s helpful, he is no longer willing to prescribe it for seriously ill patients.

The jury’s still out, Glatt said, on whether it will be helpful to patients earlier in the course of disease, or to prevent infection or serious illness – but he wouldn’t prescribe it for these reasons until he sees results from clinical trials.

He said he’s particularly troubled by the idea of someone taking the medication to prevent COVID-19 if they are not routinely exposed to people with the disease. In that case, he said, there would only be a risk to the medication with no clear benefit.

One other concern is that by driving up demand for hydroxychloroquine, people who need it to treat their chronic autoimmune disease might be denied access. Fincher said she has three patients who struggled earlier this spring to get the drug.

Michael Hogue, a pharmacist and president of the of American Pharmacists Association, said pharmacists have been concerned about maintaining access for chronic patients, and try to ensure a constant supply for them.

Hogue said that pharmacists have seen a spike in demand for the drug since the president first started talking about it back in March.

“There’s no questions that consumers are asking their physicians for the medicine,” he said, or that doctors have written a growing number of prescriptions for it. Some pharmacies, especially those in areas that are not COVID-19 hotspots and therefore not prioritized by suppliers, have not been able to keep up with the demand, he said.

Patients taking the drug to prevent disease might be prescribed one 200-mg pill per day, while a hospitalized patient might be started at 4 pills the first day, and two for the next four to six days, he said.

Despite skyrocketing global demand, hydroxychloroquine continues to sell for about 22-cents per pill, with insurance generally covering the cost, Hogue said.

Arthur Caplan, a bioethicist at New York University Langone Medical Center, said he thinks there’s so little supportive evidence and so many questions about hydroxychloroquine that it’s simply unethical to prescribe the drug outside of a clinical trial.

Caplan said he’s worried that the President’s support for the drug will encourage charlatans.

“When the president says “I’m on this stuff,” every crackpot begins to sell phony stuff online,” he said.

He’s also worried that people will see the President not wearing a mask, not keeping his distance from others, and taking hydroxychloroquine – and will decide that they should do that, too.

“Don’t substitute that drug for a mask,” Caplan warned. “We know masks work.”