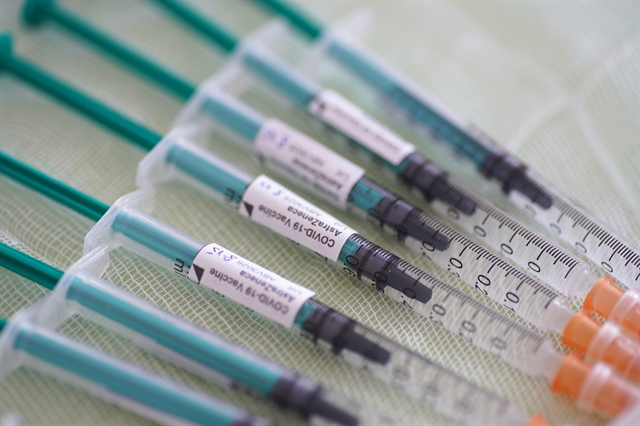 HÀ NỘI — The Drug Administration of Việt Nam has approved the import of the first 200,400 doses of the Oxford/AstraZeneca COVID-19 vaccine for emergency use.

This is the first batch of Việt Nam’s order of 30 million doses of the vaccine bought directly from the manufacturer (with phased delivery throughout 2021), in addition to about 4.9 million doses that the country is receiving under the WHO-led COVAX initiative aimed at equitable access to COVID-19 vaccines, especially for poor and developing countries.

The batch is expected to be delivered by AstraZeneca Việt Nam on February 23.

The company is responsible for the origin, quality of the imported vaccine and the vaccines are used for the right purposes and in a safe and effective manner, the administration’s document approving the import noted.

Previously, Vietnamese health authorities have given emergency use approval for the Oxford/AstraZeneca vaccine, the first COVID-19 vaccine to obtain such authorisation in the country.

Related agencies are still in talks with the company for larger supply to Việt Nam to ensure inoculation for its near 100 million population.

Việt Nam opted for the Oxford/Zeneca vaccine mostly because it could be stored at normal fridge temperatures of 2-8 degrees Celsius, instead of stringent super cold storage conditions like its Moderna and Pfizer counterparts, according to Lê Văn Truyền, Chairman of the Advisory Council for the Granting of Drug Registration Numbers.

The company has also cooperated with several countries in Europe and Asia to produce the vaccines, Truyền said.

Việt Nam has one locally-made COVID-19 vaccine, Nano Covax, in the second phase human trials, with another expected to start at the end of February.

Prime Minister Nguyễn Xuân Phúc at a recent cabinet meeting has said that importing COVID-19 vaccines must be considered “the highest priority of the Government,” as the country is battling its biggest wave of community infections, that has recorded over 700 cases since January 27. — VNS