HCM City receives record $6.1b overseas remittances in 2020 despite pandemic 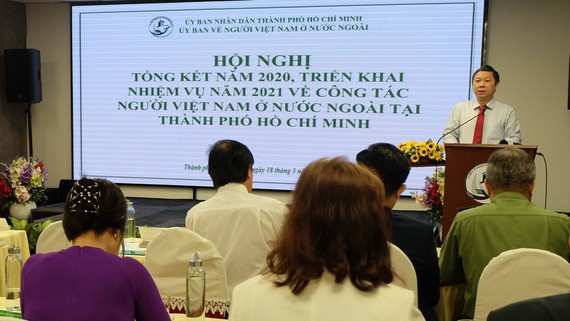 HCM CITY — Despite the impact of the COVID-19 pandemic, overseas remittances to HCM City reached a record high of US$6.1 billion last year, up more than 15 per cent from 2019, a city leader told a meeting on Thursday.

Dương Anh Đức, vice chairman of the city People’s Committee, hailed the contributions made by overseas Vietnamese businesses to the country’s socio-economic development, saying, “Remittances to Việt Nam have been worth more than $170 billion since 1990.”

He called on young overseas Vietnamese who have returned to live in Việt Nam to establish a diaspora network in the country to better exploit its socio-economic potential.

Võ Thành Chất, vice chairman of the HCM City Committee for Overseas Vietnamese, said last year more than 1,450 overseas Vietnamese were interested in learning about policies related to investment in the city.

It also received donations from overseas Vietnamese such as masks, disinfectants and other equipment in the fight against the Covid-19 pandemic, and almost 10,000 books worth more than $1.1 million meant for local universities.

Overseas Vietnamese have been providing inputs to the city Department of Science and Technology on a draft law for attracting experts in various fields, he said.

The committee would continue to help them maintain their culture abroad, he said.

More than 5.3 million ethnic Vietnamese live in 130 countries and territories.

According to Lương Thanh Nghị, vice chairman of the State Committee for Overseas Vietnamese, some 600,000 work and study in developed countries, a huge resource for the country, while 500 return to Việt Nam every year to invest in various sectors, he added.

In recent years many overseas Vietnamese have returned to start businesses since they see great economic potential in the country.

Many had very successful careers in other countries, Nghị added. — VNS