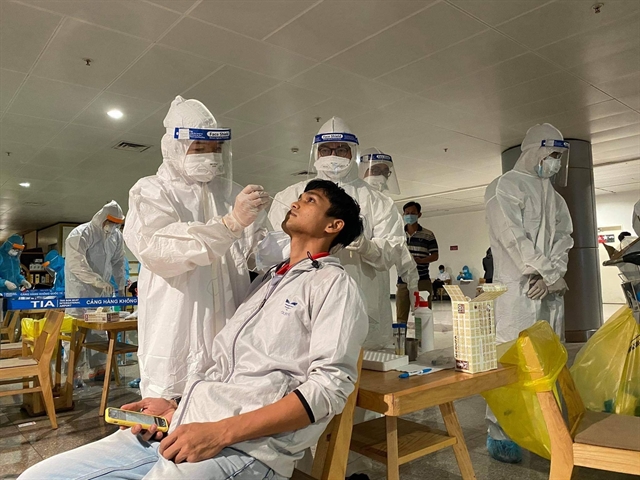 Organisers of conferences and workshops that had been scheduled for this week should reduce the number of attendees, he said.

Đầm Sen Water Park in District 11 has been closed for seven days from May 3.

Gyms will remain open, but people should comply with the Ministry of Health’s 5K message to wear masks, frequently disinfect hands, maintain a safe distance, refrain from gatherings, and make health declarations.

Religious events and activities should reduce the number of attendees by 50 per cent.

The risk of another COVID-19 outbreak in the city was high as people from provinces and cities had begun to return to the city after a four-day holiday celebrating Reunification Day on April 30 and Labour Day on May 1, Phong said at a meeting on May 3.

Many foreign experts were also entering the city to work, he added.

City authorities and people should be on high alert and maintain strict compliance with COVID-19 preventive measures, he said.

Community-based controls showed that the highest risks were from illegal entrants to the country and from violations at quarantine areas, so “we should focus on controlling these risks,” Phong said.

Offices and schools should instruct their staff, teachers and students to fill out health declaration forms when they return to the city after the holidays. Violators would be fined.

On May 3, Dương Anh Đức, vice chairman of the city People’s Committee, and an inspection team checked the Binh Điền wholesale market and a bus station in District 8, as well as a quarantine area in District 7.

On May 2, health workers at the Bến Nghé Ward health centre in District 1 took random samples from tourists and staff at Sài Gòn Zoo & Botanical Gardens.

All of the samples were sent to the HCM City Centre for Diseases Control and Prevention (HCDC). The results will be returned two days later to the people who were tested.

A 23-year-old tourist from the neighbouring province of Bình Dương visiting the Sài Gòn Zoo & Botanical Gardens told local media that she was surprised that samples were being taken for COVID-19 tests. She said that she usually wears a mask when going outside and keeps a safe distance when contacting other people.

Earlier, the HCDC took 1,537 samples of people at high-risk areas such as hospitals, tourism areas, cinemas, and commercial centres, among others. All of the test results were negative for coronavirus.

The city said that people entering the city from lockdown areas in the country would be quarantined for 14 days and tested. The lockdown areas include Lý Nhân District’s Đạo Lý commune in Hà Nam Province, the villages Hoàng Xá, Hoàng Các and Nại Khê in Hưng Yên Province’s Phù Cừ District, and the Trung area in Đông Anh District’s Việt Hùng Commune in Hà Nội.

At ports, vessels are allowed to dock to pick up and deliver goods, but their crew members are banned from entering the city.

Border guard forces at ports have set up 24 teams to work with agencies to prevent ships’ crew members from entering the city. Surveillance cameras at ports are set up around the clock. VNS