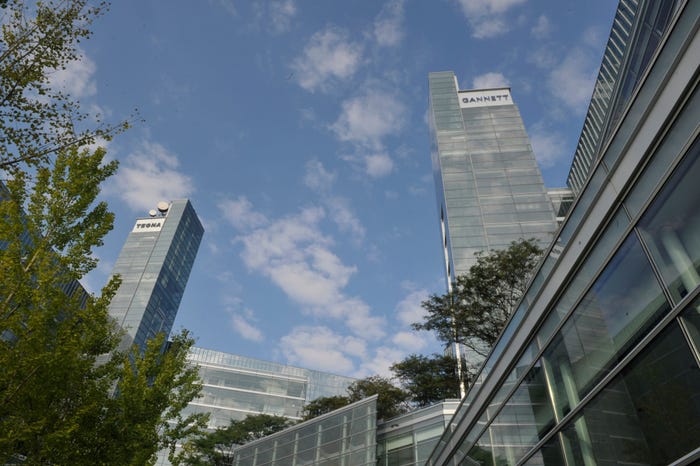 USA TODAY owner Gannett reported a net loss in the first quarter as the spread of the coronavirus reduced advertising spending from businesses hobbled by the pandemic, but the company turned a profit when factoring out one-time occurrences.

The media company, which owns more than 260 daily publications, posted a net loss of $80.2 million, including $78 million due to depreciation and amortization and $34 million in cash charges tied to the company’s recent merger.

And before the impact of one-time issues, revenue fell 10% from a year earlier to about $939 million.

The results reflect the combination of New Media Investment Group and Gannett after their merger in November, a deal that created the largest U.S. media company by print circulation and one of the largest by digital audience.

“Revenue and EBITDA performance were strong, despite the disruption experienced over the last two weeks of March from the COVID 19 pandemic,” Gannett CEO Michael Reed said in a statement. “The impact on our business from the pandemic came fast and is significant. However, we continue to execute on our operating and integration plans from the Acquisition of Legacy Gannett last year. The realization of synergies remains on track and debt pay down remains ahead of schedule.”

Before the pandemic hit, Gannett was “actually pacing ahead of expectations for both revenue and EBITDA,” Reed said on a conference call with investors and analysts.

The journalism industry is grappling with a sharper-than-usual reduction in advertising due to COVID-19, which has hurt key spenders like restaurants, stores and travel companies. The industry also continues to deal with the advertising shift from print to digital.

To offset a sudden drop in revenue from the coronavirus fallout, Gannett suspended its dividend on April 1 and announced plans to implement $100 million to $125 million in cost cuts in addition to previously planned savings tied to the merger.

The fresh round of cuts has included furloughs, job cuts, pay reductions for senior managers and the suspension of nonessential travel and spending. Many other news outlets have taken similar steps in recent weeks.

Reed projected that year-over-year second-quarter expenses would fall by more than 25%, compared with a decrease of about 10.5% in the first quarter.

“We continue to evaluate additional options to strengthen our company as we navigate through this crisis,” he said in a statement.

Annualized savings tied to the company’s merger totaled more than $75 million in the first quarter, as the company said it “remains highly confident” of achieving its goal of $300 million by the end of 2021.

The company’s digital business “has definitely held up better” than print advertising, Reed said on the call.

Paid digital subscriptions to the company’s journalism rose 29% from a year earlier to 863,000 in the first quarter. Online subscriptions are viewed as critical to the success of media companies in the digital age as newspaper dollars decline.

He said he’s “been impressed with” the “resiliency” of circulation during the pandemic, including no “change to the negative in our print circulation trends other than single-copy” declines.

The combined company, which took on the Gannett name, paid down debt by about $13 million during the first quarter, with the proceeds coming mainly from real estate sales.

Reed said the company remains “highly confident” in its ability to pay off the debt on time and that the main requirement on the loan is that Gannett maintains $20 million in cash on its balance sheet at the end of every quarter.

Gannett ended the first quarter with about $200 million in cash.

Quarterly interest payments will begin coming due in June, when Gannett will owe a $125 million, followed by payments of $50 million each in the third and fourth quarters.

Reed said Gannett has “great relationships and a very open dialogue with our lenders” and that “gives us confidence that we can deal with” future uncertainty as the pandemic continues to unfold.

Asked whether the company is considering eliminating any unprofitable days of newspaper printing and delivery, Reed said “that’s not part of our plan today” and the company continues to believe its best bet is to maintain a daily print relationship with its readers.

Despite the ongoing pandemic, Reed said the company is “cautiously optimistic that the worst is behind us” after steep declines in revenue in late March and early April.

The Courier Journal on Monday won the Pulitzer Prize for Breaking News Reporting for its coverage of last-minute pardons issued by Kentucky’s outgoing governor in 2019.