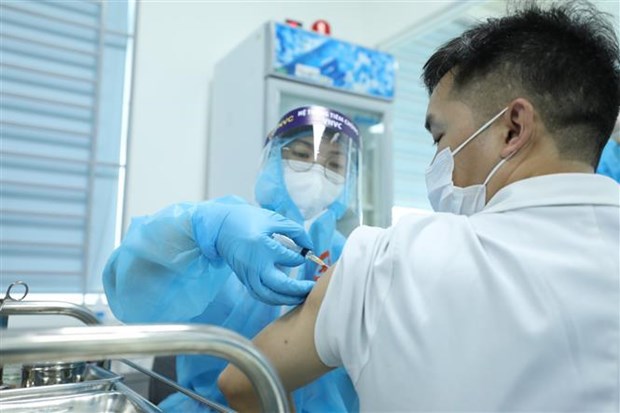 A medical worker at the National Hospital for Tropical Diseases gets an AstraZeneca shot. —VNA/VNS Photo

HÀ NỘI — People who have received two doses of COVID-19 vaccines should still quarantine for 14 days and test negative for SARS-CoV-2 at least twice after entering Việt Nam, a health expert has said.

Trần Đắc Phu, former head of the General Department of Preventive Medicine and senior expert of the Việt Nam Public Health Emergency Operation Centre, told Sức khỏe & Đời sống ( Health and Life) newspaper that Việt Nam had yet to make any changes in health monitoring measures for people who enter the country during the pandemic, including those with vaccine passports.

Many people expect that vaccine passports would be a measure to help people live with the pandemic and allow countries to re-open borders to help revitalise the tourism industry, Phu said, adding that “however, the issue is still controversial”.

The World Health Organisation called for caution and said authorities and tourism managers should not consider vaccination a requirement for international travel.

It is reasoned that the effect of COVID-19 vaccines in preventing infections is still unclear now and vaccine supply is still limited around the world.

Phu said vaccination was the most effective tool to respond to communicable diseases and some countries, in the past, used vaccination certifications as a condition for travel permission during pandemics like cholera, plague or yellow fever.

“Similarly, once people have COVID-19 vaccine passports, they have advantages when travelling. If the vaccine could effectively activate their immune system, they will not be infected or spread the disease. So, economic difficulties, particularly those that tourism and aviation sectors have met, would be solved,” Phu said.

However, he said risks should be taken into account.

Normally, it took 4-5 years or even 10 years to develop a vaccine while COVID-19 vaccines were developed and licensed rapidly in an emergency. As a result, likely, people have not understood the vaccines and their effects, for example, the vaccines’ ability to reduce infections, illness levels or symptoms, according to the expert.

In addition, new variants of SARS-CoV-2 have appeared and it would be possible that the vaccines would not work or would be less effective against these variants.

“Each country will select suitable preventive measures after assessing the risks and benefits of vaccine passport,” Phu said, suggesting that the quarantine time could be shortened if taking into account both the vaccine passport and testing results.

On Wednesday morning, Việt Nam received the first person with a vaccine passport. The overseas Vietnamese doctor Calvin Q Trịnh returned to Việt Nam from the US after getting two doses of the COVID-19 vaccine and a vaccination record card was pinned in his passport.

Upon his arrival, he stayed quarantined at a hotel in HCM City’s District 3, according to Tuổi Trẻ ( Youth) newspaper. VNS