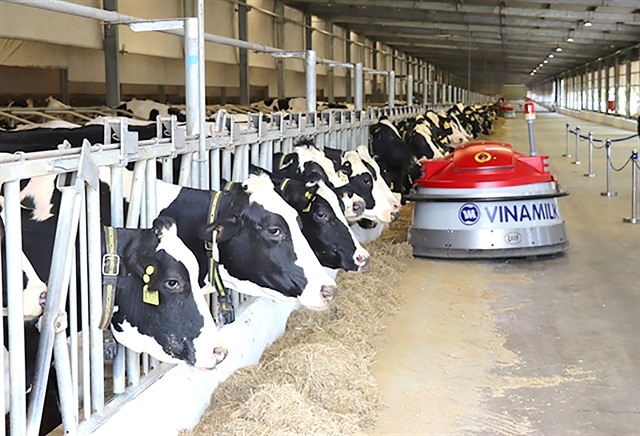 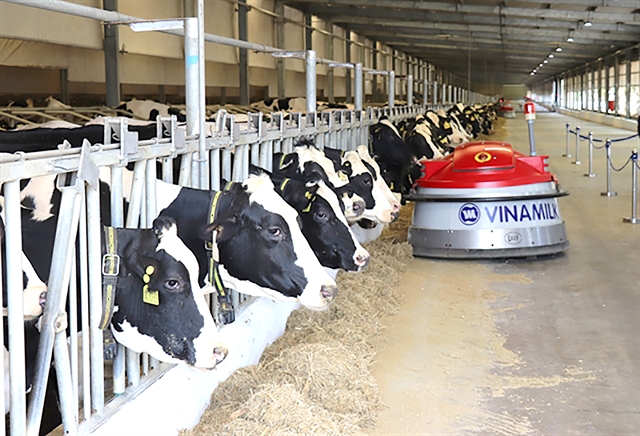 A dairy farm of Việt Nam Dairy Products Joint Stock Company (Vinamilk or VNM) in Long Khánh Commune, Bến Cầu District in the southern province of Tây Ninh. Since the beginning of this year, share prices of VNM has decreased by nearly 16 per cent. — VNA/VNS Photo Lê Đức Hoảnh

HÀ NỘI — The prices of raw materials for food processing have increased continuously since the outbreak of the COVID-19 pandemic, which is expected to dramatically affect the profits of food firms in 2021.

According to the General Statistics Office, in the first four months of this year, the prices of raw materials for food, fuel and materials used for production has increased by 4.64 per cent over the same period last year.

Việt Nam Dairy Products JSC – Vinamilk (VNM), the largest dairy company in Việt Nam, is a blue-chip stock that has experienced the most dramatic decline in share prices in recent months. Since the beginning of this year, VNM has decreased by nearly 16 per cent while VN-Index has increased by more than 17 per cent.

According to SSI Securities Joint Stock Company, in 2021, Vinamilk would face double difficulties as the COVID-19 pandemic affected demand and the price of input materials had skyrocketed.

Vinamilk plans to increase selling prices this month to compensate for the high price of input materials. A higher average selling price will ease pressure on gross margin, Vinamilk said.

For example, input costs of milk and sugar are likely to increase by 16 per cent this year. This would reduce the company’s gross margin by about 6 per cent, but competition in the dairy market could make it difficult for Vinamilk to increase its product prices.

Quảng Ngãi Sugar Joint Stock Company (QNS) has been almost flat compared to the price at the beginning of this year, currently trading at VNĐ39,000 per share. Although sugar products have brought a positive outlook for QNS, the soy milk business is negatively affected by the sharp increase in raw material prices. As a result, it has affected the gross profit margin of the soy milk segment.

VinaCapital said that as of mid-May, soybean prices increased by 60 per cent year-on-year, while sugar prices were up 35 per cent.

In the face of market movements, in 2021, QNS sets a cautious business plan. Although revenue is still expected to increase by 19 per cent compared to that in 2020, reaching VNĐ8 trillion (US$347.3 million), QNS sets a target of after-tax profit of VNĐ913 billion, down 13 per cent this year.

Among the leading listed food processing enterprises in Việt Nam, the shares of KIDO Group Joint Stock Company (KDC) are probably the least affected shares on the stock exchange.

In recent sessions, KDC shares have witnessed impressive gains, reaching VNĐ54,700 per share. Contrary to VNM or QNS, since the beginning of the year, KDC stock has increased by nearly 48 per cent.

Although the prices of palm, soybean, and sunflower oil have all increased sharply in recent months, VinaCapital believes that KIDO has deftly passed those costs to their buyers, as the company dominates the niche market for vegetable oil.

By the end of the first quarter of this year, KDC’s inventory increased by 10 per cent to VNĐ1.3 trillion. — VNS