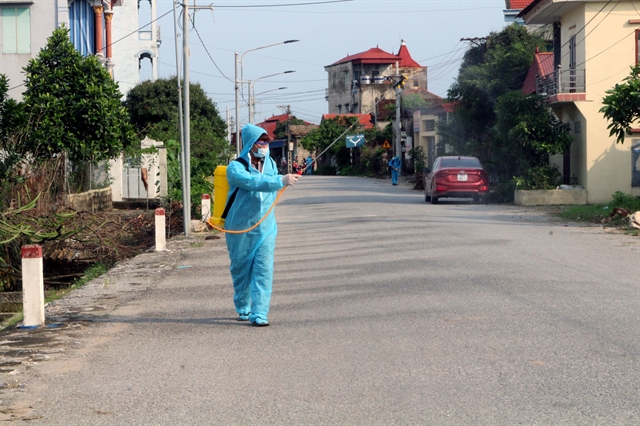 A medical worker disinfects the street in Hà Nam Province’s Quan Nhân Hamlet where a man tested positive for the virus. — VNA/VNS Photo

HÀ NỘI — Five people have tested positive for COVID-19 after coming into close contact with a patient from the northern province of Hà Nam who was confirmed positive earlier on Thursday.

They were among 45 new cases reported by the Ministry of Health on Thursday evening, including 39 imported, all of which were isolated upon arrival.

The five locally transmitted patients include four people from the same family in Hà Nam Province and one in HCM City.

All are connected to a 28-year-old man from Hà Nam Province (Patient 2899) who tested positive for SARS-CoV-2 after finishing 14 days of mandatory quarantine.

He had returned Việt Nam from Japan via Đà Nẵng International Airport on April 7.

He was quarantined for 14 days in central Đà Nẵng City and tested negative for coronavirus three times before completing the quarantine period.

The last test was conducted on April 21.

After returning home from the mandatory quarantine period, he developed a fever and sore throat and was taken to a local clinic for a COVID-19 test on April 28. The result was positive.

The four newly-confirmed patients in Hà Nam are the man’s parents, wife and his one-year-old child.

Meanwhile, the patient in HCM City dined out with the man on April 22 and travelled to HCM City afterwards.

After the new cases were revealed, the Ministry of Health issued an urgent notice to all passengers onboard flight VJ3613 from Japan to Đà Nẵng International Airport on April 7 to contact their nearest medical centres for guidance and testing.

Although they have all completed 14-days of quarantine, officials are still urging them to contact their local health facilities for further tests. — VNS