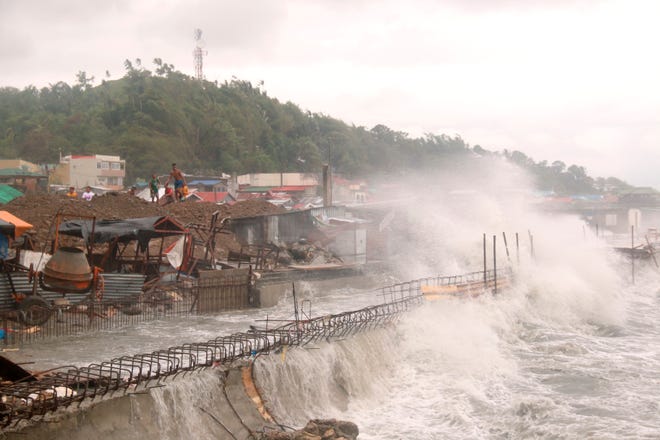 MANILA, Philippines — A strong typhoon slammed into the eastern Philippines on Thursday after authorities evacuated tens of thousands of people while trying to avoid the virus risks of overcrowding emergency shelters.

The first typhoon to hit the country this year rapidly gained force as it blew from the Pacific then barged ashore in San Policarpio town in Eastern Samar province around noon, weather agency administrator Vicente Malano said.

The typhoon came as the Philippines is trying to fight COVID-19 outbreaks largely by locking Filipinos in their homes and prohibiting gatherings that can set off infections. More than 11,600 infections, including 772 deaths, have been reported in the country.

Typhoon Vongfong, which was packing maximum sustained winds of 93 miles per hour and gusts of up to 115 mph, was forecast to blow northwestward and barrel across densely populated eastern provinces and cities before exiting in the north Sunday.

Meanwhile, in the Atlantic:Tropical storm will likely miss Florida this weekend. But beach conditions may get dangerous.

Overcrowding in emergency shelters is a common scene in the archipelago hit by about 20 typhoons and storms annually and regularly experiencing volcanic eruptions and earthquakes.

Many officials faced a difficult dilemma on how to shield villagers from the double threats. Video showed fierce rain and wind swaying coconut trees, rattling tin roofs and obscuring visibility in Eastern Samar, where some towns lost power.

"This is very complicated," Mayor Benjamin Ver of a town in the typhoon's path told The Associated Press by telephone.

Far-flung Jipapad is prone to landslides and flooding. The town in Eastern Samar province is surrounded by mountains and planked by two rivers that often swell in storms. The only evacuation centers for its 8,000 villagers are a gymnasium and the town hall where residents could be sheltered from the typhoon. Ver, who also is the town's only doctor, said he has secured enough face masks to protect his villagers from the virus in the town hall when the typhoon hits.

Observing social distancing "is almost impossible" if all the villagers are cramped in the town hall, but Ver said he would see what else can be done.

Jipapad and the entire Eastern Samar, a province of half a million people, fortunately remain free of coronavirus infections unlike neighboring regions, provincial Gov. Ben Evardone said. All emergency shelters have been turned into quarantine facilities with medical equipment in case of outbreaks but may have to be rearranged back into evacuation centers if large numbers of people need shelter, Evardone told The AP.

Northern Samar provincial Gov. Edwin Ongchuan said he has asked for twice the usual number of school buildings to be turned into typhoon shelters to accommodate about 80,000 residents who were being forcibly evacuated from high-risk coastal villages.

"If we used 10 school buildings before, we now need 20 to accommodate the evacuees with social distancing," Ongchuan said by telephone.

The government weather agency warned that "along with large swells, this storm surge may cause potentially life-threatening coastal inundation" and added that sea travel would be dangerous in regions expected to be battered by Vongfong, a Vietnamese word for wasp.

Metropolitan Manila will not be hit directly by the storm but may be lashed by strong winds. Officials were advised to remove many medical quarantine tents set up outside hospitals that could be blown away, Malano said.

The impoverished eastern region initially hit by Vongfong was devastated in 2013 by Typhoon Haiyan, which left more than 7,300 people dead or missing, flattened entire villages, swept ships inland and displaced more than 5 million.

More:From Arthur to Wilfred, here's the list of hurricane names for the 2020 season