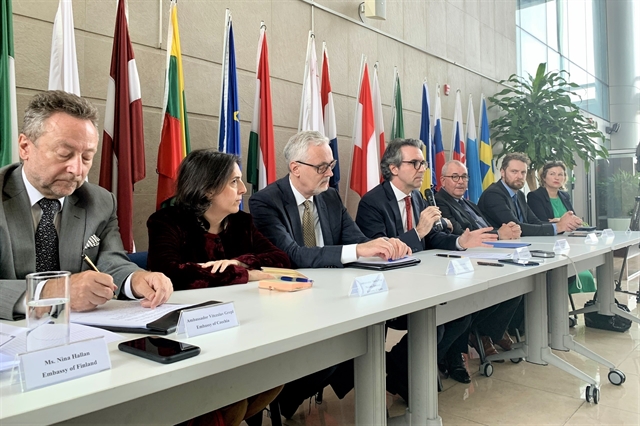 EU ambassadors at the press briefing on Monday in Hà Nội. — VNA/VNS Photo

HÀ NỘI — The UK-EU’s ongoing row over the AstraZeneca vaccine, including a potential ban on exports of doses the company made in the EU, will not affect the supply to the COVAX initiative, EU Ambassador to Việt Nam Giorgio Aliberti said.

Addressing local media at a press briefing on Team Europe’s contribution to COVAX, an initiative co-led by Gavi, the Coalition for Epidemic Preparedness Innovations (CEPI) and WHO to ensure fair and equitable access to all countries, the EU ambassador noted that the export restriction is not applicable to all vaccine doses produced by plants in the EU.

As the European Commission has announced, the limits on exports of COVID-19 vaccines are only in effect if the company fails to deliver on its contractual obligations with the EU and that the vaccine doses are going to a country where the outbreak situation is not severe.

However, the restrictions have no impact whatsoever on the supply to COVAX initiative, and to beneficiary countries of the initiative, including Việt Nam, Giorgio Aliberti confirmed.

Based on the situation in Việt Nam, which has had competent handling of the pandemic and kept infections and deaths low, the country is not among the highest priority in terms of vaccine needs.

However, concerned partners are working to ensure that the vaccine batches can reach Việt Nam as early as possible, the ambassador said.

COVAX targets include 2 billion vaccine doses and 1 billion syringes procured and delivered by end of 2021 to 190 countries around the world.

Team Europe (the EU and its Member States) is the first donor of COVAX, contributing around US$2.62 billion, nearly half of the facility’s budget, which the EU ambassador said: “demonstrates the symbolic solidarity of Team Europe to ensure the roll-out of safe vaccines without discrimination.”

Other EU states’ ambassadors to Việt Nam have also expressed commitment to a multilateral approach to ensure fair and equitable vaccine access, especially through the COVAX initiative.

Việt Nam is slated to be the third country in Asia to receive COVID-19 vaccines for free via the COVAX initiative in late March or early April, following Cambodia and Philippines earlier this month.

The EU Ambassador to Việt Nam also said the quality of AstraZeneca vaccines supplied via COVAX is “exactly like the ones we get in Europe and the US”, and there should be no worries about the vaccine’s quality just because it is given for free.

EU ambassadors at the press briefing has also commented on the recent decision by some EU states’ health authorities to suspend the use of Oxford/AstraZeneca over concerns of blood clot events, reiterating that the move is purely precautionary and many have resumed the rollout with the vaccine.

The proposed ‘digital green certificate’ – containing information on whether the carrier has received COVID-19 vaccine on which date with which type, or that they have recovered from COVID-19 infections, or proof of negative COVID-19 diagnoses, which will help facilitate movement within the EU region, has also been touched on.

Spanish ambassador to Việt Nam Maria Jimenez said the certificate is still being considered by the EU member states, but Spain itself is a strong proponent of the idea, given how the country is reliant on tourism.

Spain received some 80 million tourists in 2019, double its population, so a pass to enable travel would certainly help in socio-economic recovery, she remarked. — VNS