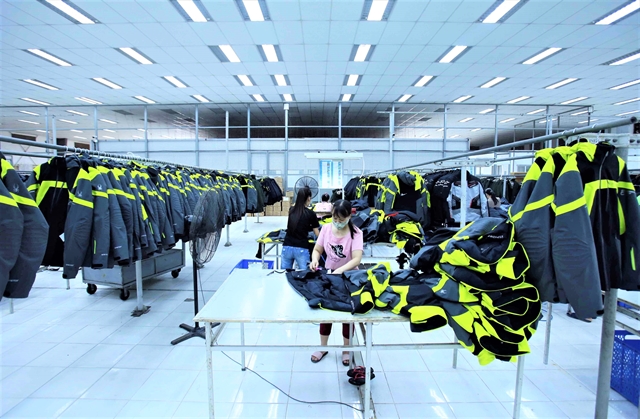 Workers in masks at a garment for export factory at South Korean-invested Kydo in an industrial park of the northern province of Hưng Yên. The Vietnamese Government is seeking to achieve the double goal of containing the COVID-19 pandemic and promoting economic growth. — VNA/VNS Photo Phạm Kiên

HÀ NỘI — Economic recovery and stimulation measures during the ongoing pandemic, along with corruption in the Party ranks and efforts to streamline the State apparatus are among the main concerns of voters, according to the Việt Nam Fatherland Front.

During the 54th session on Monday, the National Assembly (NA) Standing Committee heard proposals and requests from voters and the public to the Presidium of the Central Committee of the Việt Nam Fatherland Front (VFF) submitted to the upcoming gathering of the NA.

Since the last NA meeting, the presidium has received some 2,278 petitions and proposals via the NA deputy delegation and the front’s member associations, Hầu A Lềnh, Secretary General of the VFF’s Central Committee revealed.

Lềnh said the public was pleased over the successful organisation of the 13th National Party Congress earlier this year, which marked an important milestone in the development of the Party, the Vietnamese people and the nation, outlining vision and orientations into the future.

Regarding production-business and people’s lives, voters and the public welcomed the Government’s directions on promoting domestic production, business and consumption; boosting export and disbursement of public investment capital, expedition of many national key projects that contribute to early recovery and socio-economic development of the country.

Lềnh said voters and people were pleased with local governments’ resolve to ensure that every family and every person could ring in the new year in happiness, especially in their efforts to take care of social policy beneficiary households, people with meritorious services to the revolution, and people in difficult circumstances.

The official noted the people’s appreciation for the reforms and capacity enhancements in the 14th-tenure NA, especially the question-and-answer sessions with Cabinet members.

On behalf of the presidium, Lềnh presented to the NA Standing Committee five major groups of suggestions and proposals based on what it received from voters.

First, the presidium wants the NA, the Government, ministries, and local administrations to soon issue their detailed plans to realise the Resolution of the 13th National Party Congress, continue perfecting the socialist-oriented market mechanism and State governed by law, continue enhancing national competitiveness and engendering an environment conducive for people and businesses to access and utilise effectively the country’s resources.

Second, it asks for more instructions, inspections and monitoring to ensure the successful election of deputies to the 15th-tenure parliament and to the people’s councils at all levels in the 2021-26 tenure and that the election was conducted in a democratic, fair, legal, safe, and economical manner.

Third, the presidium asks the NA and the Government to have measures to innovate and enhance the quality of State apparatus’ operations, ensure that the State bodies are organised in an efficient manner to effectively respond to the demands of international integration and đổi mới (reforms).

Fourth, the presidium asks the NA, Government, ministries and local administrations to continue promoting measures to recover and stimulate the economy and ensure social welfare in the context of complicated developments caused by the pandemic; address standing issues in education, health, culture and social life; improve land management and environmental protection; maintain social order and political security; and to polish institutions on management and supervision of cadres and party members and implementing more effectively the efforts to prevent corruption and wastefulness.

Finally, the presidium requests the NA, the Government, ministries, and local authorities review and evaluate the implementation of the proposals of the voters, the people and the Presidium of the Central Committee of the Việt Nam Fatherland Front at sessions of the 14th-tenure National Assembly and report to voters and people nationwide. — VNS