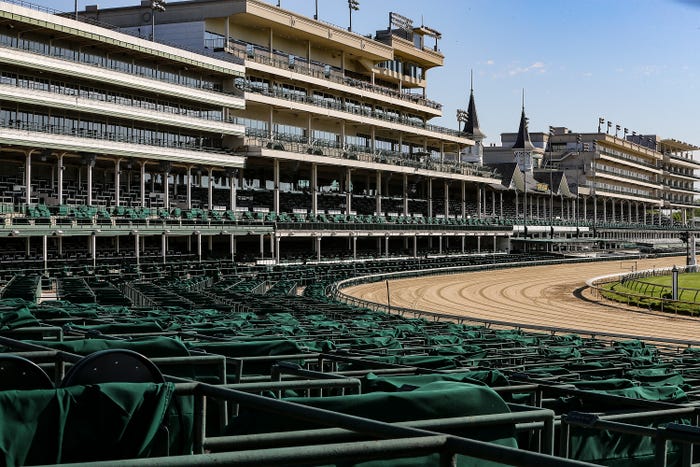 The first Saturday in May dawned bright, beautiful and barren at Churchill Downs.

Not a horse to be seen. Not a pile of manure to be side-stepped. Not the bustle of bettors at the wagering windows. Neither the fashionably dressed nor the sloppily drunk in attendance.

Having ceded its traditional place on the calendar for the first time since World War II, the Kentucky Derby has been rescheduled for Sept. 5 as a concession to the coronavirus pandemic. Yet four months out, there is still no assurance that date is firm or that the demands of social distancing will allow the country’s most famous horse race to be conducted in front of a crowd.

“We’re going to run the Kentucky Derby in 2020,” Churchill Downs President Kevin Flanery promised. “Matt Winn famously said, ‘I don’t care if there are two horses on the track and two fans in the stands, the Kentucky Derby will be run.’ That’s true today as well.”

LOOK BACK:World War II delayed the Kentucky Derby in 1945. How the race endured.

If Winn made the Derby the bucket-list event it has become, and distinguished writers have elevated it to art, its legends and its lore are widely shared and deeply savored.

“Until you go to Kentucky and with your own eyes behold the Derby, you ain’t never been nowhere and you ain’t never seen nothing,” wrote Irvin S. Cobb, the sage of Paducah.

Standing in the paddock Saturday morning, Flanery recalled parking cars at his grandmother’s house, 200 yards from the track. He teared up while talking about all of the people who help stage the Derby, and he invoked the memory of the late John Asher, Churchill’s keeper of the flame, to explain the atypically ideal weather.

“Last year, after the two rainy Derbys in a row, I looked up to John Asher and said ‘I’ve got to have sunny and 75 on the first Saturday in May,’" Flanery said. ”Well, I got it. I just should have been a little more specific.

“It’s obviously a very odd, unique time for all of us.”

It was, to be sure, an eerie morning at the sprawling track along Central Avenue. A brick pathway on the backside, heavily trod during Derby week, had sprouted a series of anthills that could never have survived normal foot traffic. Construction on the planned first-turn hotel had stopped, with only stark gray stairwells to mark the spot.

Awaiting masked media types to assemble at the start of a tour, Churchill spokesman Darren Rogers paused to call attention to the strange silence pervading the premises.

Bill Vest, the backside security director, reported for work about 5:30 a.m. Saturday and felt guilty about slacking off.

Vest worked his first Derby in 1982, as part of the starting gate crew. Exactly 38 years since he helped load Muttering and Laffit Pincay Jr. into post No. 11, he remembered, correctly, that the Santa Anita Derby winner finished fifth behind Gato Del Sol.

“I was hoping for a win,” Vest said. “Anyone who’s an assistant starter, you always hope to win the Derby.”

Though the race has been postponed this year, the dream persists. Yet with so much uncertainty about public gatherings in the fall, Flanery acknowledged Sept. 5 might be a moving target.

“We will adapt and adjust as we learn new facts and do it the right way when the right time comes,” he said. “There are a lot of different scenarios. But the Derby is not just two minutes. It’s a feeling in this community. We want people to be able to celebrate it. We’ve got plenty of time to adjust. But the Kentucky Derby will happen in 2020.”