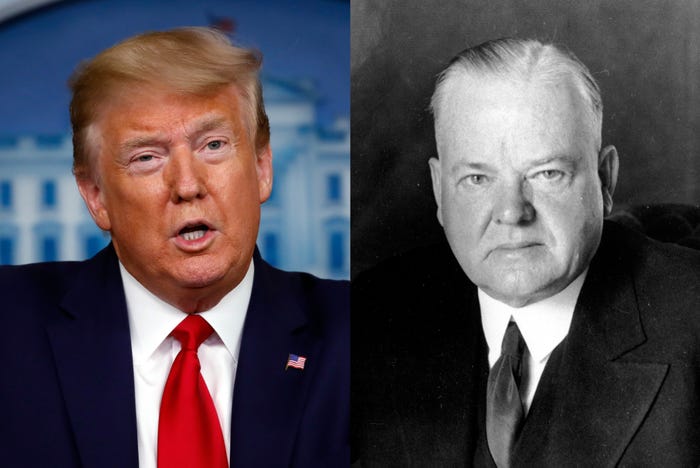 In March, the president, said the worst would be over in 60 days. Weeks later, he predicted that the economy would be back to normal soon. Later, he said “the fundamental strength of the economy is unimpaired.” While these remarks sound familiar, they didn’t come from Donald Trump. The president offering them up was Herbert Hoover during the first years of the Great Depression.

The quotes come from Robert Caro’s magnificent “The Path to Power.” He observes that when asked about all the men selling apples on the sidewalk, Hoover responded, “Many people have left their jobs for the more profitable one of selling apples.” He was determinedly oblivious, in Caro's telling: “He couldn’t bear to watch suffering, so he never visited a breadline or a relief station; as his limousine swept past men selling apples on street corners, he never turned his head to look at the them."

Caro finished off his devastating summary with this quote from Hoover: "Nobody is actually starving. The hoboes, for example, are better fed than they’ve have ever been. One hobo in New York got ten meals in one day.”

Eerily familiar, no? Trump has been in denial about the coronavirus crisis since day one. We know his quotes and tweets. It was nothing, it would magically disappear, it was under control, the economy was in great shape, the economy would come roaring back any minute. On Thursday, economic adviser Larry Kudlow implied working had gone out of fashion and said it has become cool again. On Friday, Trump touted the stock market rally as the biggest since 1974. That was the day after we had learned close to 17 million people were unemployed in the last three weeks alone and knowing full well that the St. Louis Fed has predicted nearly 50 million people would be out of work before this was over.

To paraphrase the old joke, denial seems to be a river that runs through Washington. Bad leaders who refuse to see what doesn’t suit their ideology or political fortunes ignore crises and make bad times much, much worse.

Step one to solving a problem is acknowledging it. But in this case, not only is the president in denial, not only is his staff in denial, but he is hiring new aides who made their reputation with him by saying things like incoming White House Press Secretary Kayleigh McEnany’s line that under Trump, we don’t get epidemics like coronavirus. He has fired truth-tellers from Navy Capt. Brett Crozier, who warned of rapidly spreading COVID-19 on his ship, to the inspector general named to oversee relief funds for the pandemic.

The president's men and women — Mike Pence and Larry Kudlow and Kellyanne Conway and Jared Kushner and Bill Barr — have spread the lies further. And of course, the centerpiece of his policy has been suppression of the truth about the crisis by slow-walking and then unfunding and then denying the need for testing … which is the only way we can ever know how deep the crisis is.

Take it from a doctor:Fake news about the coronavirus is hazardous to your health. Don't fall for it.

Less than 1% of Americans have been tested, and there's widespread agreement among experts that official counts underestimate the deaths caused by the pandemic. The number of people dying at home in New York City without a diagnosis is 10 times normal levels. It is not a coincidence that this surge is happening at this time of public health crisis.

Ignoring warnings from the Obama team, from the intelligence community, from the Army, from his own economic adviser, are also a form of this denial. So are the Trump-led attempts right now to sell the line that we are ready to open for business. The facts show otherwise.

On our own at a perilous moment

Experts including the president’s own advisers, like Dr. Anthony Fauci, emphasize that we risk triggering another wave of the disease if we prematurely lift the lockdown that currently has more than 9 out of 10 Americans sheltering in place. Indeed, a second wave seems likely in any case and were it to hit a society that has unlearned the lessons of the past three months, the toll would be catastrophic.

That is why Trump ignoring the constant drumbeat of warnings since he entered the White House is not simply a frustrating story of our recent past. It is one about a looming risk to our future on a par with that caused by the virus itself.

Ex-Republican on Trump coronavirus failures: Our lives depend on electing Joe Biden

The United States did not begin to turn the tide against the Great Depression until it elected a man who acknowledged and truly understood the depth of the problem, Franklin Delano Roosevelt. He acted from his first 100 days onward with the sense of urgency and the scope of initiative that the crisis called for. And when programs faltered or failed, he admitted it and found new ones.

You can’t be anti-fact or anti-science or anti-math or, for that matter, without empathy, and be a good leader. Closing your eyes to a disease that doesn’t care whether you believe in it or not won’t make it go away. On the contrary, it will only demonstrate that viruses like this one, like economic disasters, actively thrive on denial. As a consequence, today we face not one but three grave risks — from the pandemic, from the shattered economy, and from being leaderless at a moment of great peril.

David Rothkopf is CEO of the Rothkopf Group and host of "Deep State Radio." His latest book, "Traitor: A History of Betraying America from Benedict Arnold to Donald Trump," will be published in October. Follow him on Twitter: @djrothkopf