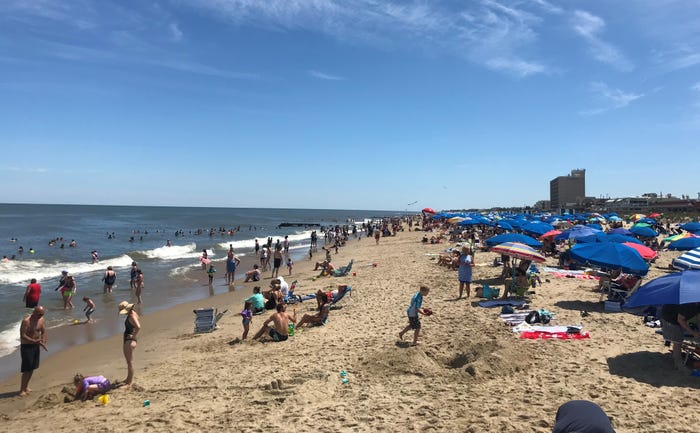 Those are just a few of the potential consequences in Delaware’s beach towns as they deal with hundreds of thousands of dollars in budget shortfalls from the coronavirus pandemic.

But balancing the need to get business moving again needs to be done with public health as the priority, officials acknowledge. The bigger the crowd, the greater the chance that someone could have a positive case of COVID-19 and spread it to others.

“This disease can pass from one person to another even if you don’t realize you have it. It’s just scary,” said Rehoboth Beach Mayor Paul Kuhns. “Now with the summer being here, we have to be careful.”

Large events typically draw crowds to the beaches, boardwalks and businesses, prompting people to pay for parking meters and permits (and sometimes pay up on tickets). Town leaders don't know how long it will take for revenues to recover without the events and income.

In Dewey Beach, the only main beach town that will have a professional fireworks display this Fourth of July, budget shortfalls could be as low as $275,000 in a best-case scenario. Worst-case scenarios, though, are as high as $1.5 million, which would account for more than a third of the town’s annual budget, said Dewey Beach Mayor Dale Cooke.

SEE:COVID-19 testing site at the Starboard in Dewey Beach

“We don’t have a property tax. And everybody else that I know of has a property tax, whether it be the county, other municipalities, state,” he said. “Other than transfer tax, we get next to no money from the homeowners in town.”

Like other beach towns, Dewey relies heavily on parking-related income. The shortfall has officials figuring out where to cut without losing full-time staff. There’s been talk in Dewey Beach of reducing lifeguards and having some sections become swim-at-your-own risk, like they are during slower times of the year in the spring and fall.

SAVING LIVES:How Delaware's lifeguards are training for a new normal

As for fireworks, Dewey will pay for extra policing, but has no say in the permitting of the event itself, which is paid for and put on by the private Highway One Group that owns popular spots like The Rusty Rudder. Fireworks are shot from a barge in Rehoboth Bay, outside town limits.

In Rehoboth Beach, Fourth of July celebrations that include fireworks, live music and more can attract over 50,000 people, said Kuhns. But the contract had a May 15 deadline for moving forward. And given the coronavirus outlook at the time, they saw little choice but to cancel.

“We couldn’t find it in ourselves to suggest there might be a possibility of social distancing given 50,000 people showing up to town,” he said, noting that the crowds could still be as large with people just wanting to get to the beach.

Even the Sea Witch Festival, which can attract around 200,000 visitors over the span of a few fall days, remains a huge unknown. Many other events throughout the spring, summer and fall have already been canceled or postponed, reducing the number of potential visitors to Delaware’s beach towns, as well as the money they would have spent on restaurants, shops and other local tourism-driven businesses.

But when the weather is good, the beachgoers will come. That’s what’s been happening lately, giving some hope that economic recovery is possible. It has also raised fears that further spread could reverse some reopening measures later this summer or in the fall.

As many other states are seeing a resurgence in positive cases and reports emerged that a handful of COVID-19-positive teens may have exposed more than 100 people during Senior Week here, officials are struggling to balance public health risks with dire economic predictions.

The model uses state-level data to figure out the chance someone in a specific crowd size has coronavirus.

This model does not calculate the risk of that person infecting others, just the chances they could be in the crowd and pose a risk to others.

Right now, gatherings of up to 250 people in indoor settings are allowed in Delaware. The planning tool shows that in a gathering of 250 people in Delaware as of June 25, there’s an 18.2% chance that at least one of those people has coronavirus.

Increase that number to 50,000, which is the estimated crowd size for Rehoboth’s Fourth of July fireworks display, and there’s more than a 99% chance that one or more eventgoers are positive, according to the model.

Both percentages are based on the assumption that there are 783 positive COVID-19 cases in Delaware, which comes from data as of June 25.

However, not all people are getting tested, and not all positive cases are being caught by state-level disease surveillance efforts. That means the the risks could be even greater at these gatherings.

On a beautiful late June day, with temperatures in the 80s, Rehoboth Beach filled with beach umbrellas, children and families.

Groups of families and friends played pop music while soaking up the sun's rays.

Almost no one on the sand, other than lifeguards and a few cautious people, wore masks.

People would put them on as they trekked between the sand and Rehoboth Avenue across the Boardwalk, where they are required. Rehoboth Beach police officers asked those without if they had one, and offered one if not. They’ve handed out 7,000 masks, officials said.

On the avenue, as people lined up for their Thrashers fries or Kohr’s ice cream cones, noses hung out over cloth face masks. Some were pulled down below chins so people could more easily carry on conversations. At lunchtime, keeping 6 feet away became nearly impossible.

What’s critical, said Betsy Reamer with the Lewes Chamber of Commerce, is not just that people come and sit on the beach. It’s that they shop at local stores, dine at local restaurants and stay in local hotels or short-term rentals. Those tourism dollars have a ripple effect, and that goes for a huge event like Sea Witch or a smaller more spread-out one like Lewes’ Tulip Festival.

Over the last decade or so, Delaware’s beach towns have become more like year-round destinations, even if the business largely comes on the weekends, tourism officials said.

Tourism officials are hoping that cases continue at manageable levels in Delaware so businesses can recoup some losses by the season’s end. There may be even more pressure on the shoulder season to close those gaps.

“This fall is critical,” said Lauren Weaver, executive director at Bethany-Fenwick Area Chamber of Commerce. “It’s kind of basic math: You have businesses that lost virtually an entire quarter of sales and it’s going to take a long time to make that up. It doesn’t come back in one quarter, one season, one year.”

How many beach businesses could be lost remains to be seen.

One of them could have been Dolle’s Candyland, were it not for a Delaware SBA loan that helped the 110-year-old business pay rent for its prime location, said Dolle’s owner Tom Ibach.

“It’s been tough,” Ibach said, after spending a good part of the afternoon working with saltwater taffy at his store on the Boardwalk. “It’s going to be a very gradual recovery.”

Right now, his business is operating at about 40%. An inability to hire overseas workers through the J-1 student program means his staff is down by about 75%, which sometimes means slower service for customers.

“I believe recovery is going to take two to three years because of the economic impact to us,” he said. “It’s been difficult, but we’ll adjust and adapt.”

Ibach said he’s not alone. He expects that next year, there will be fewer beach restaurants and businesses. And the economic impacts are going to reach far beyond this summer, especially if restrictions have to be put back in place to curb the spread.

Owner Peggy Raley-Ward said the virus has led to a postponement of at least 75% of events this year.

Luckily, she said, none of those has been a cancellation. They’ve all been pushed back to next year. But the worries about the virus itself, or whether people will be able to enjoy a special day without restrictions like face masks, have prompted fall events to reschedule.

Pushing those events back to 2021 means the game of catchup is going to continue well into next year.

“There will be a revenue loss next year. You’re not moving forward with new clients,” Raley-Ward said. “But it’s what has to happen. This is where we are, and we just have to deal with it.”

Business owners like Raley-Ward understand there’s a flip side to those struggles. If events like the beach town fireworks displays, or even larger weddings, were to go on as planned, they would bring a much bigger risk that may not be worth it.

“Everybody has to understand that the thing that matters most and has to happen first is public safety,” she said. “We’re caught in the grips of something that nobody can control, and the best way we can try to get a handle on it is for somebody to try to follow safety protocols and get past it as fast as we can so we can get back onto the road of recovery.”