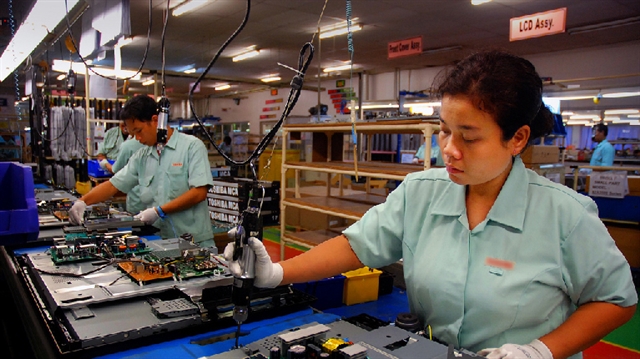 More than 70 per cent of Việt Nam’s working-age women are in the labour force. Photo ILO Vietnam

A new research brief by the International Labour Organization (ILO) in Việt Nam shows the COVID-19 pandemic has not only exacerbated existing inequalities but created new gender gaps.

More than 70 per cent of Việt Nam’s working-age women are in the labour force, compared to the global level of 47.2 per cent and an average of 43.9 per cent in Asia and the Pacific.

While the gender gap in labour force participation is narrower in Việt Nam than in the world, it has still stood at 9.5 percentage points (men’s rate higher than women’s) over the last decade.

According to the research brief ‘Gender and the labour market in Viet Nam: An analysis based on the Labour Force Survey’, uneven distribution of family responsibilities in Việt Nam’s society could be the reason for the disparity. Nearly half of the women who were not economically active in the 2018 Labour Force Survey made this choice because of “personal or family-related reasons”, compared to only 18.9 per cent of inactive men.

The research also indicated that the high labour force participation of women in Việt Nam should not be interpreted as an indicator of equal opportunity.

“Before the COVID-19 pandemic, both women and men had a relatively easy access to jobs, but the quality of such jobs was on average lower among women than among men,” said Valentina Barcucci, ILO Việt Nam Labour Economist, lead author of the research.

Female workers were overrepresented in vulnerable employment, particularly in contributing to family work. They earned less than men (by 13.7 per cent on monthly wages in 2019), despite comparable working hours and the progressive elimination of gender gaps in educational attainment.

Women were also underrepresented in decision-making jobs. They accounted for nearly half of the labour force, but less than a fourth of overall management roles.

“Again the gap women face in job quality and career development stems from the double burden they carry,” said Barcucci. “They spend twice as many hours on household work than men.”

Women spent an average of 20.2 hours per week cleaning the house, washing clothes, cooking and shopping for the family, family care and childcare, whereas men spent only 10.7 hours. Close to a fifth of men did not spend any time on these activities at all.

COVID-19 impacts from a gender perspective

As a result of the pandemic, total working hours dropped significantly in the second quarter of 2020 and recovered through the second half of the year. Women faced the most severe losses.

The total weekly hours worked by women in the second quarter of 2020 were only 88.8 per cent of the total for the fourth quarter of 2019, compared to 91.2 per cent for men.

However, women’s working hours recovered faster. In the last three months of 2020, women worked 0.8 per cent more hours than in the same period of 2019, whereas men worked 0.6 per cent more.

“Those employed women who worked longer hours than usual in the second half of 2020 possibly wanted to make up for the income losses in the second quarter,” said Barcucci. “Such additional hours made the double burden heavier to carry, as the time spent by women on household chores remained disproportionately high.”

The impact of COVID-19 on Việt Nam’s labour market has not only widened existing inequalities but also created new ones. Before the pandemic, there was no difference between the male and female unemployment rate, but a gap appeared from the third quarter of 2020.

“Gender inequality in the labour market is traced back to the traditional roles that women are expected to play, supported by the social norms,” said ILO Viet Nam Director Chang-Hee Lee.

“While at the policy level, the 2019 Labour Code has opened opportunities to close such gender gaps, for example in retirement age or removing the ban on female employment in certain occupations, a much more difficult task still awaits Việt Nam. That is changing the mindsets of the Vietnamese men and women themselves which will, in turn, influence their behaviours in the labour market.” VNS