ROCHESTER, N.Y. — For the second time in less than a week, Monroe County health officials are warning travelers of possible exposure to the coronavirus.

A passenger on Delta Flight 4824 from JFK International Airport to Rochester late Saturday afternoon was ill with COVID-19 and likely was spreading the virus during the flight, the county said in a news release late Wednesday night. The Rochester Democrat and Chronicle, which is a part of the USA TODAY Network, reported this story.

Fellow passengers, along with people who were in the terminal when the flight landed at 5:55 p.m. Saturday were advised to "monitor for symptoms of fever, cough and shortness of breath," the news release said.

Anyone with those symptoms should call their health-care provider immediately. Those with no provider may call a county coronavirus hotline at (585) 753-5555.

The county said it only learned Wednesday evening that the passenger was positive for coronavirus. The unidentified traveler "has been under isolation since arrival, and close household contacts have been under self-quarantine," the news release said.

Greater Rochester International Airport would have been relatively busy around 6 p.m. on Saturday, At least nine flights arrived right before the flight carrying the traveler with COVID-19 or departed shortly after the plane landed here, according to online schedules for this coming Saturday.

Delta Flight 4824 is code shared with other international carriers including Air France, Alitalia, Korean Air and KLM. There is no additional information on the inbound route the passenger took into JFK.

On Wednesday, March 11, county health officials announced a local man had tested positive for the infectious virus. Two days later, they acknowledged he had traveled here on a Greyhound bus from New York City to Rochester, potentially exposing other passengers. 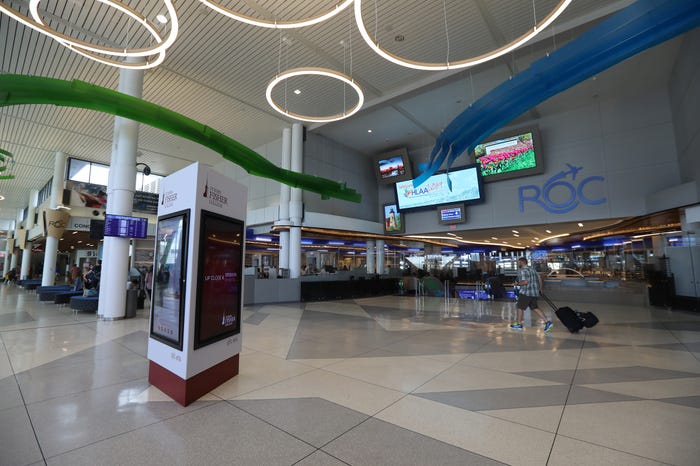 A man heads to the main exit to baggage claim. The airport made this the central point for arriving passengers to exit during the renovation. (Photo: Tina MacIntyre-Yee/Rochester Democrat and Chronicle)

That man, who also was confined at home after arriving here, acquired the virus while visiting Italy, officials said.

At last word, the health department had found seven bus passengers who disembarked with the man in Rochester, but were looking for four more whose identities they did not know.

They have not said whether those passengers were located.