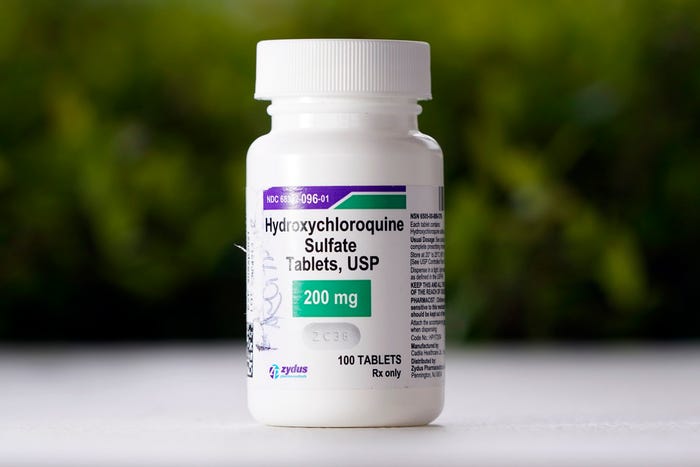 A new study shows coronavirus patients who took hydroxychloroquine to treat COVID-19 had a higher risk of death than those who weren't given the drug.

The study, published Friday in the medical journal The Lancet, also found that COVID-19 patients were more likely to develop arrhythmia if treated with hydroxychloroquine, or its closely related cousin chloroquine.

Arrhythmia can lead to a sudden cardiac death, the report said, but researchers did not associate the study’s fatalities with adverse cardiac affects.

Even though it’s only an observational study – not the gold standard double blind, randomized, controlled trials – experts say the enormous sample size makes it compelling.

The study comprises of 96,000 coronavirus patients from six different countries who were hospitalized between Dec. 20, 2019 and April 14, 2020. Nearly 15,000 patients were treated with hydroxychloroquine or chloroquine alone or in combination with an antibiotic – similar to the cocktail President Donald Trump said he was taking Monday.

“This is a much, much larger sample size than has ever been reported in regards to hydroxychloroquine and chloroquine,” said Dr. Matthew Heinz, hospitalist at Tucson Medical Center in Arizona. “The results are pretty compelling and fairly consistent.”

“When you add azithromycin, it’s always worse,” Heinz said. “Cardiac death is something you can’t monitor for, you can’t detect.”

President Trump told reporters during a roundtable discussion with restaurant executives at the White House on Monday that he’s been taking the drug for the past week and a half, along with zinc and an initial dose of the antibiotic azithromycin.

He tweeted his praise for the drug combination Thursday saying it has “a real chance to be one for the biggest game changers in the history of medicine."

Despite the Lancet study, Heinz doesn’t believe ongoing studies that continue to use the drug in clinical trials should be halted as they have safety monitor boards that can pull the plug if things go awry.

“This is science. COVID-19 isn't Democrat or Republican. It doesn’t get upset with tweets,” Heinz said. “We’re going to science our way through this (pandemic).”