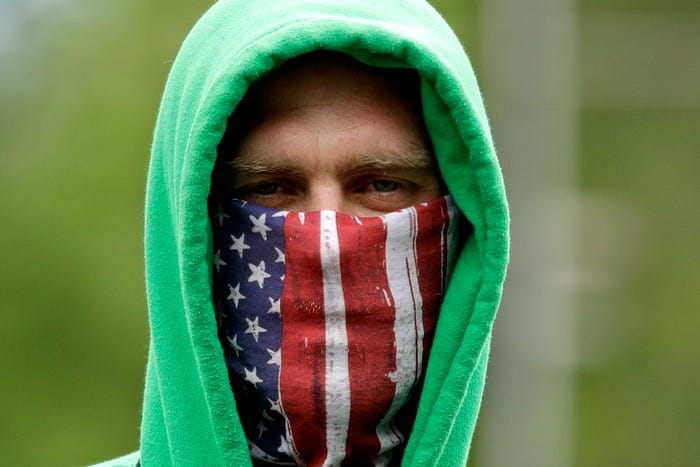 President Donald Trump on Tuesday is scheduled to visit a Honeywell aerospace plant in Arizona that produces face masks, a day after Gov. Doug Ducey announced he was accelerating the plan to reopen the state's economy.

Also Monday, Kroger, the nation's largest supermarket chain, announced it would offer free testing to all its frontline associates who have symptoms or a medical need, Costco set a temporary limit of meat purchases and U.S. Treasury Secretary Steven Mnuchin said it was "too hard to tell" if international travel would resume this year.

The U.S. death toll from coronavirus was nearing 70,000 early Tuesday, with more than 1.1 million confirmed cases, according to the John Hopkins University data dashboard. Worldwide, the virus has killed over 251,700 people and infected more than 3.5 million.

Our live blog is being updated throughout the day. Refresh for the latest news, and get updates in your inbox with The Daily Briefing. Scroll down for more details.

Here are some of the most important developments to know early Tuesday:

Kroger, the largest U.S. supermarket chain, says it will provide free coronavirus testing to all its frontline essential workers with symptoms or a medical need. The announcement comes after Kroger employees have died from the virus and workers have protested the company's response to the outbreak.New data from within the Trump administration is projecting a steady rise in the number of cases and deaths, potentially reaching about 3,000 daily deaths on June 1, according to The New York Times. The White House is disputing the report. The Food and Drug Administration announced plans to bolster oversight of antibody tests by requiring commercial test makers to meet new standards of accuracy and submit new information proving the testing quality.

What the internet is talking about this morning: Man who wore KKK hood at California grocery store may be charged with hate crime, authorities say.

Good news: If you're really missing Taco Bell on this Cinco de Mayo, you can bring an entire taco bar home. Yep, Taco Bell is offering its At Home Taco Bar ($25), which has all the ingredients for tacos packed individually for you to build as you wish.

The nation's largest supermarket chain announced it will offer free COVID-19 testing to all its frontline associates "based on symptoms and medical need," according to a press release.

Kroger, the parent company of Ralphs and Fred Meyer, will test employees by providing self-administered kits and testing through public drive-thru sites.

"The resilience of the Kroger family is unparalleled, and we're doing all we can to keep our team healthy and safe," Colleen Lindholz, president of Kroger Health, said in a statement. "The widespread availability of diagnostic testing will now allow our associates to feel more empowered and knowledgeable about their health, creating safer stores and facilities."

The announcement comes after employees have died from the coronavirus, and workers in Southern California protested the company's response to the outbreak.

Shares advanced in Asia early Tuesday after Wall Street shook off a slow start and ended with modest gains thanks to another solid showing from big technology companies.

Shares rose in Hong Kong, Sydney and Singapore. Markets in Shanghai and Tokyo were closed for a holiday.

Wall Street shook off a weak start and ended with modest gains Monday, thanks to another solid showing from big technology companies.

A recovery in oil prices was helping drive gains in Asia on Tuesday as the U.S. benchmark added $1.50, or more than 6%, to $21.89 per barrel in electronic trading on the New York Mercantile Exchange. It climbed 61 cents on Monday to $20.39.

Brent crude, the standard for international pricing, picked up $1.30 to $28.50 per barrel.

Costco to temporarily limit meat purchases to 3 items per person

“Costco has implemented limits on certain items to help ensure more members are able to purchase merchandise they want and need,” reads the company statement.

As California prepares for Stage 2 of its reopening plan, which will allow some retail businesses to begin curbside pickup on Friday, Virginia Gov. Ralph Northam announced Monday that the Old Dominion would remain under stay-at-home orders until May 14.

Meanwhile, Arkansas will permit barbershops, beauty salons, massage therapists and tattoo artists, among others, to open again on Wednesday. Find out the latest on your state.

More than half of the residents who tested positive for the new coronavirus in a San Francisco-based community screening initiative were asymptomatic, according to data released Monday by the University of California San Francisco.

Of the nearly 3,000 residents and workers in the city’s Mission District who were tested, 62 were positive, with 53% saying they hadn't experienced COVID-19 symptoms.

The study, called Unidos En Salud, was conducted in a majority Hispanic/Latinx community. None of the positive cases were from the nearly 1,000 white/Caucasian people tested, while 95.1% of the people who tested positive were Hispanic or Latinx, according to the study.

Most of the people, nearly 89%, who tested positive were also from homes with a total household income less than $50,000, according to study data.

“The virus exploits pre-existing vulnerabilities in our society,” Dr. Diane Havlir, chief of the UCSF Division of HIV, Infectious Diseases and Global Medicine at Zuckerberg San Francisco General Hospital and Trauma Center said in a statement.

COVID-19’s prevalence in minority and low-income neighborhoods is well-documented. A USA TODAY analysis of ZIP code data from health departments in 12 states showed infections rates were five times higher in majority-minority ZIP codes than in ZIP codes with less than 10% nonwhite populations.

Teachers wanted respect. It only took a coronavirus pandemic and worldwide economic collapse.'It makes no sense':Feds consider relaxing infection control in U.S. nursing homes.Still waiting for your coronavirus stimulus check?Here's why.Fact check:The Obama administration did not send $3.7 million to Wuhan lab.These 10 household items are back in stock. Here's where to buy them.

Analysis of data from within the Trump administration is privately projecting the prospect of a steady rise in the number of coronavirus cases and deaths, potentially reaching about 3,000 daily deaths on June 1, according to an internal document obtained by The New York Times.

The projections, based on modeling by the Centers for Disease Control and Prevention, forecast about 200,000 new cases each day by the end of the month, up from about 25,000 cases now.

The report showed that the rate of test results in Georgia and Florida, both of which have partially reopened their economies, dropped in the last two weeks of April. Public health officials say widespread testing is key to preventing another wave of infections.

The White House, which has been encouraging states to begin reopening their economies, quickly issued a statement challenging the report. The statement says the report had not been presented to the coronavirus task force or gone through interagency vetting.

"This data is not reflective of any of the modeling done by the task force or data that the task force has analyzed," the statement said. "The president’s phased guidelines to open up America again are a scientific driven approach that the top health and infectious disease experts in the federal government agreed with."

The Food and Drug Administration on Monday announced plans to bolster oversight of antibody tests by requiring commercial test makers to meet new standards of accuracy and submit new information proving the quality of their tests.

The new policy is a reversal of the agency's March 16 policy that allowed antibody test makers to sell their products without the normal step of sharing data with the agency to validate test accuracy.

The agency said commercial test makers will have 10 business days to submit new data and seek the agency's emergency-use authorization. The agency also will require test makers to meet accuracy, or "sensitivity and specificity" standards.

Dr. Anthony Fauci is the voice Americans want to hear amid coronavirus crisis. So, who is he?Are face masks the newest way to make a fashion statement?See for yourself.Fact check:Are smokers at less risk for contracting the coronavirus?States are changing their restrictions. Here's what your state is doing.Mapping coronavirus: Tracking the U.S. outbreak, state by state.