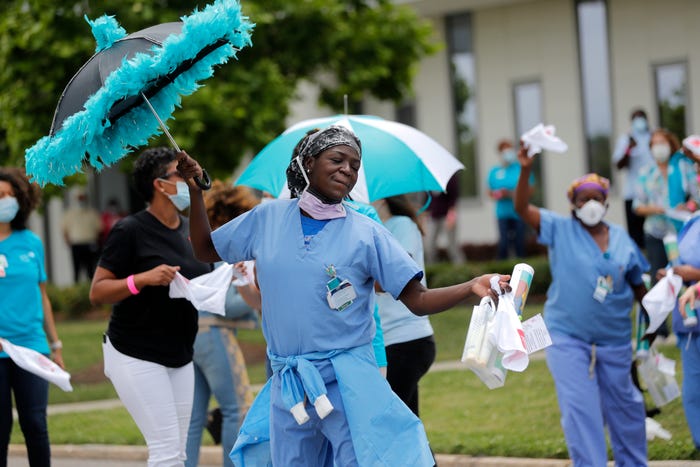 Almost all 50 states have at least partially reopened their economies as of this week. In Florida, the entertainment and dining complex Disney Springs at Walt Disney World Resort will reopen Wednesday, with safety measures including temperature checks and masks.

Also Wednesday, a Michigan conservative group plans to protest Gov. Gretchen Whitmer's stay-at-home order and the closure of barbershops and salons by giving free haircuts outside the state capitol in Lansing. And President Donald Trump is scheduled to visit a Ford Motor plant in Michigan where workers are making ventilators during the coronavirus pandemic.

The U.S. has the largest coronavirus outbreak in the world with roughly 92,000 deaths and 1.5 million confirmed cases, according to the Johns Hopkins University data dashboard. Worldwide, the virus has killed more than 323,000 people and infected 4.9 million.

Our live blog is being updated throughout the day. Refresh for the latest news, and get updates in your inbox with The Daily Briefing. Scroll down for more details.

Here are some highlights to know Wednesday:

President Donald Trump declined to respond to House Speaker Nancy Pelosi's comments about him taking hydroxychloroquine, a drug that has not been proven to work against the coronavirus, telling reporters: "I don't respond to her. I think she's a waste of time."The Trump administration extended the U.S. border closure to Canada and Mexico for another 30 days.Responding to a question from Democratic Sen. Sherrod Brown, Treasury Secretary Steven Mnuchin said "no workers should give their lives" to boost the economy.Hollywood movie mogul Harvey Weinstein's extradition to face more sex-crime charges in California has been delayed because of the coronavirus pandemic.

What we're talking about: Downtown Midland could be under 9 feet of water by Wednesday, says Michigan Gov. Gretchen Whitmer, who declared a state of emergency after two dams breached following days of rain. Evacuating residents amid the pandemic is another thing to worry about.

Staying Apart, Together: USA TODAY brings a newsletter about how to cope with these trying times straight to your inbox. 📥

The Michigan Conservative Coalition, an organization intended to shape policy and help more conservatives win election, will hold what it's calling Operation Haircut outside the Capitol on Wednesday. They will protest Gov. Gretchen Whitmer's stay-at-home order and the closing of barbershops and hair salons.

“Michigan’s small business owners are patriotic and law-abiding citizens but enough is enough,” said Marian Sheridan, a co-founder of the group, who added that marijuana dispensaries remain open but "barber shops are, somehow, unsafe."

Michigan State Police did not immediately disclose how they would react to the event. Organizers said those attending "will be encouraged to comply with social distancing and other safe practices," such as wearing masks, but people providing haircuts would not be able to remain six feet away from people getting them, as required by the order.

Connecticut will take its initial steps toward a return to normalcy on Wednesday with some restaurants and retail stores reopening with restrictions, including social distancing and masks. Also Wednesday, Kentucky will allow in-person worship services and permit customers inside retail stores. Find the latest news on your state

Amid reopenings across the U.S., scientists hope wastewater monitoring systems relying on human waste will provide early warnings if there's another burst of infections. Here's more about the efforts to collect sewage and test it for coronavirus

President Donald Trump on Tuesday called the number of COVID-19 cases in the United States – the highest in the world – a “badge of honor,” arguing the still-increasing number of cases is simply evidence the country is testing more people.

“By the way, you know, when you say that we lead in cases, that’s because we have more testing than anybody else,” the president said at the White House. “When we have a lot of cases, I don’t look at that as a bad thing. I look at that in a certain respect as being a good thing, because it means our testing is much better. So, if we were testing a million people instead of 14 million people, it would have far few cases, right?"

The U.S. has performed more than 12 million tests, according to the Covid Tracking Project. However, the country still faces testing shortages after months of hurdles in development and access.

Hundreds of McDonald’s workers in 20 cities plan to strike Wednesday, the day before the company’s annual shareholders meeting, as part of an effort to pressure the fast-food chain into improving what they say are inadequate protections for employees during the COVID-19 pandemic.

Labor organizers say scores of McDonald's workers in at least 16 states have COVID-19. A survey of more than 800 workers, organizers say, found 42% reported being told not to wear protective gear by management and 46% said they came to work feeling sick because they were afraid they would be disciplined or penalized.

The strike is supported by the Service Employees International Union and is being organized by the "Fight for $15" minimum-wage labor campaign.

The company disputes the allegations.

US extends border closures to Canada, Mexico until June 22 amid coronavirus

Travelers looking to make a trip to Canada or Mexico will have to wait another 30 days as the Department of Homeland Security extended border closures to curb COVID-19 infections.

Chad Wolf, the acting Secretary of Homeland Security, announced Tuesday that the U.S.-Canada and U.S.-Mexico land border closure has been extended until June 22.

Pier 1 Imports to shutter all stores

Pier 1 Imports, which previously said it would close half of its stores, now plans to close all of its locations.

The retailer, based in Fort Worth, Texas, announced Tuesday that it was seeking bankruptcy court approval to begin an “orderly wind-down” when stores are able to reopen "following the government-mandated closures during the COVID-19 pandemic.”

Coronavirus lockdowns have caused a whopping drop in carbon emissions

The coronavirus lockdowns have had an “extreme” effect on daily carbon emissions, causing a whopping 17% drop globally during peak confinement measures by early April – levels last seen in 2006.

However, it is unlikely to last, according to a new analysis by an international team of scientists published in the peer-reviewed British journal Nature Climate Change.

This is the first analysis to measure the pandemic-driven global drop in carbon dioxide (CO2) emissions from January to April of this year.

While the impact of lockdown measures is likely to lead to the largest annual decrease in emissions since the end of World War II, 2020 is still on track to be one of the five hottest years on record, and the study notes that these reductions are no “silver lining.”

Hydroxychloroquine and coronavirus: From studies to side effects, everything to know about the drug Trump says he's taking.How to reenter society: Your questions and advice from experts on life post-quarantine.Annie Glenn, widow of former astronaut and U.S. Senator John Glenn, dies at 100Twins who earned 37 college acceptances, $1 million in scholarships want to become nurses