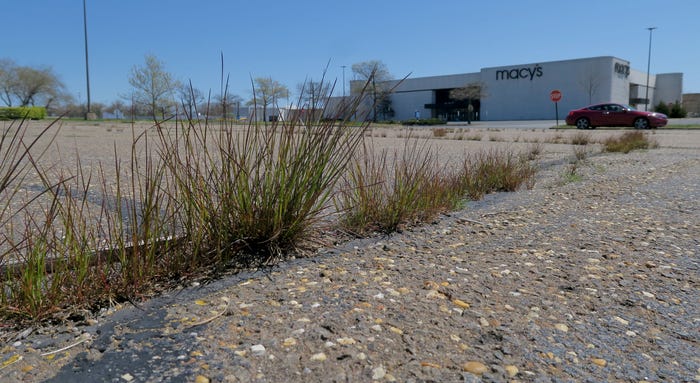 The coronavirus pandemic has cast a pall over the country's shopping malls.

Concerns over the spread of COVID-19 has temporarily closed their doors as efforts were put in place to cut down on crowds and enforce social distancing. Shoppers, under government orders, stayed home and away from the mall.

Experts predict that when the malls do reopen, they will look different than before: more vacancies, more social distancing and consumers with newfound shopping habits.

"This is a devastating blow to the shopping mall industry, and certainly there are any number of malls that will probably end up being closed within the next year," said Paco Underhill, retail expert and chief executive of Envirosell, a market and research firm in New York City. “I think all of the shopping malls are going to see vacancies in them.”

No income and number 88,000 in line:This is what it's like to be unemployed in America

Back to business?:Macy's to reopen 68 stores Monday with plan to open fully by June

Large regional shopping centers were struggling before the pandemic piled on. They were under pressure from customers shopping online, the weakening of big department store anchor draws, such as Macy's, J.C. Penney and Sears, as well as the rise of big box stores like Target and outdoor shopping malls and outlet centers.

Some have had to remake and reinvent themselves to survive by adding non-retail businesses, such as fitness centers, office and medical uses and entertainment to their tenant mix.

"The idea is we have these special experiences in the mall and that's going to attract consumers in, and once consumers are at the mall, then they will shop at stores," said Patrali Chatterjee, chairperson and professor in the department of marketing at Montclair State University's Feliciano School of Business In New Jersey.

And retailers are struggling too. U.S. retailers have already announced 2,184 permanent closures this year, most of which were announced before the pandemic began, according to retail analytics firm Coresight Research.

Other retailers, including Neiman Marcus and Ascena Retail Group, the parent company of Ann Taylor and Lane Bryant, are in distress while they await the chance to reopen their doors.

And struggling retailers may mean that they can't pay rent to the landlord, the operator of the mall. "One of the troubles that people are having is just collecting rents,” Underhill said. “Nobody is buying clothing now. Nobody’s going out to restaurants. Nobody’s going to the movies. These are going to be very tough times.”

The biggest question is even when governments relax restrictions, what will shoppers do?

"Are you going to happily go to a regional mall and stroll around with a mask on?" asked James W. Hughes, an economist at Rutgers University in New Brunswick, N.J. "Are you going to be very hesitant to really be close to other people? Will malls have to filter you in ... like they filter you into a supermarket?"

A sign of what's to come may start as early as Friday.

Other protocols include limiting store hours to allow for overnight cleaning, sanitizing and disinfecting of high touchpoint areas. All shoppers will be encouraged to wear masks or facial coverings and frequently wash and sanitize their hands, the company said.

No reusable trays, utensils and cups will be allowed in food courts. Regular announcements will be made over the audio system at each property to remind shoppers to maintain a safe distance from each other.

But will all the stores be back when the malls open? Indiana-based Vera Bradley said it's not reopening its store at the Fashion Mall at Keystone in Indianapolis, should the mall open on Saturday. Macy's said it does not expect to open all stores at once.

"We look forward to reopening our stores and welcoming back our colleagues and customers," the company said in a statement. "As we plan to reopen, we are looking at a number of factors, including state and local government ordinances."

Given the existing turmoil in the industry and the unpredictability of business fallout from the coronavirus crisis, trying to anticipate what comes next for malls in the wake of the pandemic is nearly impossible, said Ted Potrikus, CEO of the Retail Council of New York State.

But the owners and managers who find creative ways to help tenants hang on will likely be the ones to emerge from the ashes, he said. So far, a handful of malls across the country have said publicly that they’re requiring stores to continue paying rent on time.

For instance, Taubman Centers, which owns the high-end The Mall at Short Hills in New Jersey, advised tenants last month all "will be expected to meet their lease obligations," according to a memo obtained by USA TODAY. But the company added that it willing to "talk to each tenant about their respective challenges and help them chart an appropriate course for the future."

For the property owners, it’s about balancing their own financial obligations to lenders, while ensuring the malls don’t lose too many tenants. A mall that looks like it’s struggling could throw up a red flag for customers and cause them to steer clear.

“It’s all about perception. As the most forward-facing part of the economy, retail and shopping malls are going to be a very interesting intersection of economic recovery and social recovery,” Potrikus said.

Offering entertainment options outside of retail “would be the thing that helps them weather the storm,” said Potrikus, although it’s still unclear how entertainment venues will function after reopening, as social distancing measures will likely still be in place.

Destiny USA in Syracuse, New York, the largest mall in the state and a destination for travelers from around the region, including Canada, is full of unique entertainment venues and restaurants. Crossgates Commons in the Albany area recently underwent upgrades at its movie theaters and the construction of a hotel and spa on the property.

Mall owners are taking different steps to cope with the pandemic.

Last month, Unibail-Rodamco-Westfield, a global operator that runs 36 centers, including Westfield Garden State Plaza in New Jersey, Westfield Sarasota in Florida and some in airports, became one of the first companies to offer tenants of its U.S. malls relief from the impact of COVID-19 on business, WWD reported. In a letter to tenants, URW wrote: “To help alleviate the economic impact of COVID-19, if you need to delay payment of your April rent/recurring charges, you may do so for up to 90 days” or through July 1.

Brian Kingston, the chief executive of Brookfield Property Partners, which owns 122 malls and retail outlets, including the Neshaminy Mall in Bensalem, Pennsylvania, said his company was prepared for a market downturn.

“A difficult retail operating environment had already led to a large number of bankruptcies in 2019,” Kingston said in a March letter to unit holders. “In the long run, the high-quality nature of our assets and the prime locations the centers enjoy give us an advantage and will allow us to recover. But this segment of our business will undoubtedly face a challenging year ahead.”

PREIT, the publicly traded Philadelphia company that owns malls including those in Cherry Hill and Vineland, New Jersey and as well as Willow Grove and Plymouth Meeting, Pennsylvania, applied in April for stimulus funding through the federal CARES Act’s Paycheck Protection Program.

In early April, PREIT announced that it had furloughed about 37% of its staff to cut costs — about 41 people in its corporate office, and another 62 employees at properties throughout the country. PREIT could not be reached for comment.

The coronavirus pandemic also has put the skids on the long-delayed open of a water park and the first wave of stores at the American Dream, the mega mall built in New Jersey's Meadowlands.

Now it’s unclear what the future holds for the $5 billion dollar entertainment and retail complex, under development by the Triple Five Group, owners of the two largest malls in North American, Mall of America in Bloomington, Minnesota, and West Edmonton Mall in Canada. The developer did not respond to a request for comment.

“Triple Five is healthy enough that if they want to open American Dream they probably can. So the question is: do they want to?” said Jan Rogers Kniffen, a national retail consultant. “I don’t know. They may just delay the opening waiting for a more attractive environment or they may elect to go ahead, open it, and gradually add in what stores they can. They were sort of opening gradually anyway.”